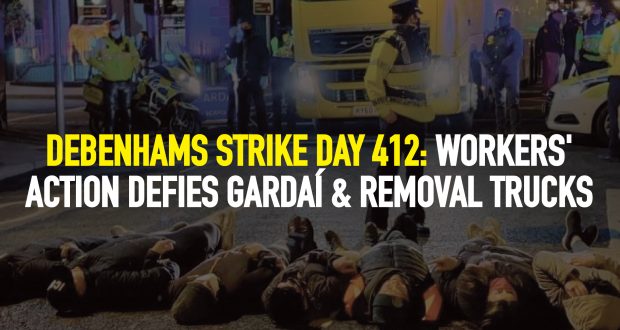 A massive Garda operation in Limerick on Monday night to remove stock from the Debenhams store in Limerick failed when one hundred ex-Debenhams workers and supporters staged a sit down protest.

At around midnight Gardaí started to block off the roads approaching Debenhams, including access to O’Connell St and Liddy St. Two city blocks were in effect locked down by police. Workers had started to gather after spotting security entering the old Debenhams store and were holding a picket at the entrance to it’s loading bay. Workers refused to move when instructed and dozens of Gardaí from the Public Order Unit were used to remove workers one by one.

However, when the first truck approached the junction of William St and Henry St and attempted to gain access to the entrances to the loading bay, workers and supporters lay down in front of it. After another stand off between approximately 100 workers and supporters and 70 Gardaí, the trucks eventually retreated. As Gardaí started to pack up crash barriers to leave the demonstrators sang ‘Limerick, You’re A Lady’ in celebration.

For the past 412 days, the Debenhams workers have been an inspiration but last night they excelled themselves. They have gone toe to toe with the repressive arm of the State and won. By taking the initiative and making this stand, they have put the leaders of ICTU to shame. If the massed ranks of the labour movement had followed the lead given by these workers, there’s no way that we’d still be here now. This is a fight all workers facing liquidation situations have a stake in and the lack of fight shown by the trade unions has been a dereliction of duty.

Whatever the outcome of this struggle, a balance sheet will be drawn and it’s important that the right lessons are learned. If we fight, we can win. If we don’t, we definitely won’t. That is the lesson from l