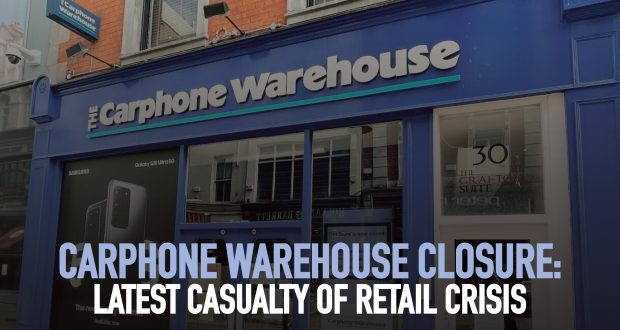 Carphone Warehouse has moved in recent days to shut down all of their Irish stores, 69 individual stores and 12 within other stores. This move will result in a total of 486 redundancies. The news was followed by the shutting down of Dixons Carphone stores which operate in Airports in Britain and Ireland.

The parent company Dixons Carphone, who also own Currys PC World, said “As part of the company’s broader transformation to one joined up and profitable business it has made the difficult but necessary decision to close Carphone Warehouse in Ireland, in line with its decision to close all standalone Carphone Warehouse stores in the UK in 2020”. Justifying the redundancies — throwing hundreds of workers into uncertainty in the middle of a global pandemic and economic crisis — as necessary to maximise profits is disgusting, but not surprising.

Covid used as an excuse for opportunistic layoffs

During the Covid-19 pandemic workers have been turfed to the side time and again: retail giants Debenhams and Arcadia are two obvious examples. Dixons Carphone are putting the blame on the pandemic, saying that footfall in stores has fallen more than 40% in the past year, coupled with predicted changing trends in shopping which “has been accelerated by the pandemic.”

Using the pandemic as a get out of jail free card is something bosses have been doing when it comes to redundancies, especially in the retail and hospitality industries. However, while 486 people have lost their jobs in Carphone Warehouse in Ireland, the CEO of Dixons Carphone takes home over £1million annually and the company raked in £45million in pretax profits in the six months prior to 31 October 2020, despite claims that business has been hit hard this is still a large amount of money flowing into the company. Even despite these huge profits last year, Carphone Warehouse has laid off staff here in Ireland, but also closed down 530 stores in Britain last year, causing close to 3,000 job losses.

It is true that the on-street retail jobs massacre that we have seen in the past year was already in the works, resulting from the rise of online shopping and the stranglehold on the market that massive companies like Amazon have, however, it’s usually also the case that money has been squandered by retail companies in bad investments — Debenhams being a notable example.

What’s needed, and what should be demanded by the trade union movement, is for all books to be opened by any company who says they are in financial difficulty so that workers can see where the profits have gone.

To fight back against the redundancies meted out by Carphone Warehouse and any other companies trying to similarly exploit the current crisis, we need to rebuild a militant trade union movement which organises in the retail sector. Unfortunately the official trade union leadership has been miles behind this urgent task. However, the spirit and determination shown by the Debenhams workers gives a glimpse of what could be achieved if a lead was given and a struggle organised. In fact real gains can be achieved by workers getting organised from below and fighting back themselves.

The Socialist Party has assisted the Debenhams workers in their inspiring struggle for fair redundancies over the past year. This strike has exposed the brutal nature of capitalism and bosses’ disregard for their workers, while also displaying the inspirational role that workers can and will play. Debenhams workers have put huge pressure on the government and their steadfast picket lines have pushed KPMG (the liquidators) to use scab labour and employ the help of the Gardaí to break pickets. This example of workers in struggle will undoubtedly inspire and be an example to other workers who face opportunistic layoffs in the future.

In order to prevent situations like Carphone Warehouse and Debenhams from happening again there must be a strong movement of all retail workers, coupled with other working-class and young people, organised in strong, fighting trade unions. Any such movement would have in its hands the power to fend off the fat cats from throwing workers on the scrap heap in the interests of profit.

A strong set of demands would be integral to a movement of this sort, these should include: