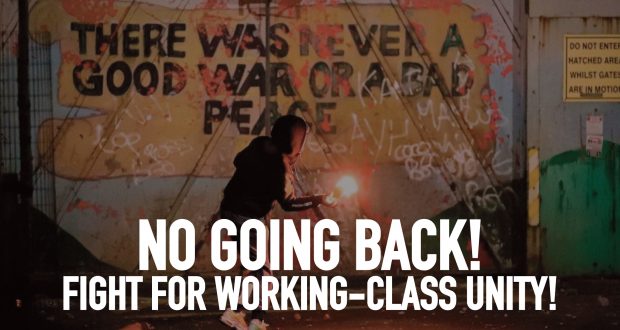 Socialist Party statement on the rioting in Belfast

No going back! Fight for working-class unity!

Protests and rioting have taken place over recent days in Protestant working-class areas across Northern Ireland, last night escalating into clashes at the ‘peace wall’ on Lanark Way in Belfast.  There is now a real danger of a significant increase in sectarian violence in the coming months. The fact that a bus driver and a photographer were attacked in Belfast last night underlines the reality that the people who will suffer as a result of these developments are workers and working-class communities.

Dead-end of Orange and Green politics

Coordination and some level of organisation by loyalist paramilitaries is clear, but the protests and riots also reflect deep anger, resentment and disenfranchisement felt by many. The blame for the rioting lies not just with those engaged in and orchestrating the violence, but also with Orange and Green politicians who have whipped up tensions in recent months, in particular the DUP and Sinn Féin.

In part, these events are a product of the failure of the British and Irish governments and the EU establishment to find an adequate solution to the border question posed by Brexit. The Socialist Party has been clear in our opposition to both a hardening of the border on the island of Ireland, but also the establishment of a border in the Irish sea, precisely because we anticipated the effect this would have.

The Irish sea border is seen by a large section of the Protestant community as another step towards being pushed into a united Ireland against their will. Many are also angered by the perception that there is one rule for Sinn Féin and another for the rest of us, following the announcement that no one will face prosecution for participation in the mass funeral for Bobby Storey.

More generally, the rioting reflects the failure and inability of the Orange and Green politicians to overcome the sectarian division in which they have a vested interest. While politics is reduced to a sectarian game of ‘us versus them’, and every divisive question becomes a zero-sum game of winners and losers, there is no solution to the issues which divide our communities, and conflict is inherent in the situation.

After a petrol bomb attack on one of their colleagues, bus workers have protested at Belfast City Hall and have taken the decision not to provide services in affected areas – in which many of the staff live – after 6pm until their safety is guaranteed, a stand for which they should be congratulated. The broader trade union movement, which unites workers from all backgrounds, should follow the example set by the bus drivers, bringing workers together to take concrete action against any attacks or intimidation.

While, of course, ensuring health and safety measures are taken in the context of Covid, the trade union movement should not hesitate to call protests against sectarian violence. This would be strengthened by committing to do whatever it takes to challenge the conditions underlying these riots – such as poverty, unemployment, lack of housing, social deprivation and the lack of a future for your people – which have been highlighted by people from the communities affected in recent days. If such an initiative does not come from the trade union leaderships, then workplace representatives and ordinary workers should take the lead themselves.

The image of a young person throwing a petrol bomb at a ‘peace wall’ gate – painted with Benjamin Franklin’s words, “There was never a good war or a bad peace” – ironically sums up the situation we are facing. Nothing better represents the ‘bad peace’ which has existed here over the last quarter of a century than the ‘peace walls’ dividing working-class communities across Belfast and beyond, the number of which has actually increased since the Good Friday Agreement. The rioting is a product of a ‘bad peace’ – one in which sectarian division has been institutionalised rather than overcome, and which has delivered no ‘peace dividend’ to working-class communities.

Some of those arrested in connection with the rioting have been aged 13 or 14. This speaks volumes about the absolute failure of the Northern Ireland Executive to deal with the problems facing young people. For most of their lives, the DUP and Sinn Féin have been sharing power at Stormont. Yet, increasingly, young people in both communities feel they have no hope of a decent future, something that will be further underlined by capitalism’s deepening economic crisis. Years of cuts from Stormont have also destroyed many of the youth clubs and other services that would have existed for young people in the past.

No going back – only working-class unity can find solutions

This rioting is a warning of things to come if the sectarian forces in both communities – from the ‘respectable’ political parties to the paramilitaries – are left unchallenged by a genuinely cross-community, working-class alternative. Common struggle against the common misery that both communities face is essential, not just to challenge these conditions, but also to challenge sectarianism.

United struggle of the working class – Protestant, Catholic and neither – can raise people’s sights towards the potential for fundamental change: for a break with the capitalist system which sows division, and for a socialist future in which working-class people have a real say over the running of all aspects of society. This can provide a basis for workers and young people to find genuine and democratic solutions to the questions which currently divide our communities, in a spirit of solidarity, compromise and mutual respect.