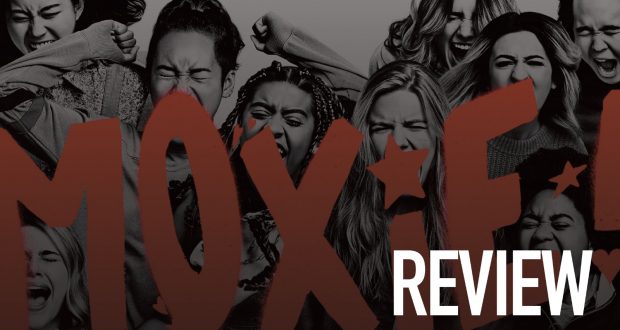 Moxie is a ‘feminist coming-of-age movie’ starring Hadley Robinson as ‘Vivian’, a meek teenage girl who flies under the radar and avoids the attentions of misogynist football captain, Mitchell, and his friends who rule over the school with sexist comments and actions. These include compiling ‘the list’ — a virtual catalog that assigns female students at the school titles like ‘best ass’ and ‘most bangable.’ A practice that is allowed to continue by the laissez-faire attitude of the school’s staff who acclaim the football team and particularly its captain. This is despite the team’s inability to win a game, while the girls’ team is successful with no recognition.

Vivian initially brushes off the sexist behaviour going on in the school. She later reverses this stance when her name is put on ‘the list’, accompanied by a demeaning title, and, inspired by her mother’s involvement in the ‘riot grrl’ scene in the 1980s, starts anonymously producing a feminist zine ‘Moxie’ — the name coming from her principal’s calls for students to show school pride.

The film is wide-reaching and touches on issues such as the policing of women’s bodies, misogyny in sports and education, toxic masculinity, rape culture, and sexual assault, especially in intimate teenage relationships. The film addresses many of these serious issues in a way that comes off as natural and realistic. You can often feel the pain the character is enduring and their experiences are portrayed in a way that is achingly relatable.

The film addresses how dangerous it is to leave misogynistic attitudes unchallenged. While Moxie truly exposes how girls are told from a young age to keep their head down and ignore harassment or unpleasing comments, it also exposes how young boys’ behaviour, seen as ‘boys will be boys’ is widely accepted over the discomfort they cause to their female peers. However, all of this changes when the new girl, Lucy, shows up. When Vivian tells her to keep her head down, she correctly replies that misogynistic behaviours aren’t just annoying but dangerous — a fact that will be revealed to be true at the end of the movie when Mitchell is exposed as a rapist.

This whole scene sets the tone for what will be shown as needed: collective and organised actions to challenge any form of misogynistic and backward attitudes from body policing, to catcalling, to rape — to declare even the tiniest sexist joke as not tolerable anymore and winning justice for Mitchell’s victims. The film is particularly relevant and poignant in the context of Irish schools today where archaic religious-based standards, that predominantly affect girls, are still enforced. An example of this would be the demeaning practice of making girls kneel to ensure their skirts stretch beyond their knees, which is common practice in church-owned girls’ schools. Or the habit of taking girls out of classes to attempt to wash their fake tan off, and in many cases, when a girl cannot get their tan off or refuse to, they are sent home.

At one point in the film, enraged by their outdated dress code, the students stage a demonstration by wearing clothes that go against the school’s body-shaming rules. This is similar to what took place in Carlow Presentation College in 2020, where students, including male students, wore skirts and leggings to challenge the school’s misogynistic way of enforcing uniform rules, following an instruction from school management for students to stop wearing leggings to PE because it apparently shows off the “female anatomy”  and is “distracting”.

The role of school management in maintaining the status quo is seen in Principal Shelly, a woman who has been assimilated into the system and chooses to enforce old-fashioned regulations, rather than dealing with the issues plaguing her school. But it is also evident that collective actions have an undeniable impact in forcing change and challenging attitudes. This was illustrated in the movie not only when Mitchell was eventually being sanctioned for his acts, but also when the teacher, Mr. Davies, who would have originally been passive towards sexist comments, eventually supported the students’ walkout action.

Despite being a relatively progressive film, Moxie fails to avoid the pitfall of tokenism: a blink-and-you’ll-miss-it gay kiss which is never further addressed, as well as a disabled girl who appears in a handful of scenes but is never given any substance outside of being wheelchair-bound. Similarly, there is an ever-so-brief conversation about white women’s attitude towards black women’s hair, which could have been made much more prevalent in the movie had the filmmakers chosen not to only focus on the point of view of Vivian, who provides a one-note view on women’s oppression, which seemingly materialised overnight. The film largely follows the generic structure of recent coming-of-age movies and features a break in the middle where Vivian develops her relationship with her love interest, time that could have been invested in developing characters such as Lucy, or Vivian’s best friend, Claudia.

Hadley Robinson, who plays Vivian, is 27 years old, a decade older than the character she plays. Casting older actors as teenagers is an issue that permeates through most movies and shows, but has become an identifying feature of Netflix shows, most infamously, shows like Riverdale. This casting is immensely problematic as it sublimely tells teenagers that they should look like an adult, shoving insecurity and an unrealistic body image onto one of the most impressionable demographics. It also tells adults that real life teenagers, particularly girls, are more mature and developed than they actually are, contributing to the sexualisation of children. This can have life-ruining effects on these young people.

Nonetheless, Moxie reflects the surge of people who experience misogyny who have been empowered to speak up against their oppression, the floods of people who have found the strength to speak on their experiences following the killing of Sarah Everard, the Mother and Baby home scandal, the Repeal campaign and the #MeToo movement, to name a few of the countless rebellions against women’s oppression that have erupted so far in the 21st century. This film demonstrates that popular media is not changing our minds, we are changing theirs.