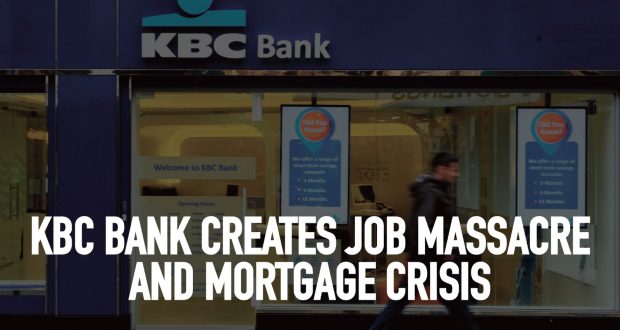 KBC Bank has chosen to withdraw from the Irish market after 40 plus years of operations with the loss of 1,400 jobs at a time of massive unemployment. This sudden evacuation is likely fueled by the profound uncertainty that has been injected into the property market due to the pandemic. Unemployment has reached a staggering 25%, meaning that many working-class people will no longer be capable of paying their exorbitant mortgage payments or rent.

This is linked with the ongoing profiteering of developers, banks and landlords that emerged in the late 1990s during the economic boom of the “Celtic Tiger”. Many workers are still struggling to pay their mortgage debt due to the aftershock of the 2008 economic crash.

KBC Bank Ireland, a subsidiary of Brussels-based KBD Group, has €8.9 billion of performing loans and €1.4 billion of impaired loans with most of these loans being mortgages. The problem of impaired loans has been an issue for some time at KBC. So much so that in 2018, KBC Ireland more than doubled the size of its mortgage impairment team in order to ‘clean up the portfolio.’

Many mortgage holders were managing to keep their head just above water, defaulting on their mortgage payments but then paying just enough at times to begin curing, which allowed them to remain in their home. KBC was looking to wipe off as many of these impaired loans as they could from their books in order to prepare the asset for sale on the financial market. This is why the bank was far more willing to openly engage in callous evictions of working-class people than other banks. All in order to create a shinier product for re-sale on the market, but with total disregard for the wellbeing of the occupants or the devastating societal consequences of evictions, which is the chief cause of the homelessness tsunami of recent years.

We spoke with a former employee who worked in KBC’s finance department. They described that, “KBC felt like they were operating in a minefield of bureaucratic red tape when it came to evicting people from their homes. So much so that using computer automated data modelling, KBC had calculated a precise average of how long it would take to reclaim property after beginning eviction proceedings through the courts”.

Due to the 2008 economic crash, many workers were unable to pay their mortgages. Faced with the prospect of mass evictions and the fierce political fallout that would result, the government intervened with a web of mortgage restructuring processes. These were introduced through the CBI in order to prevent mass evictions from taking place at the hands of the bankers. “This and other automated practices being developed added an extra layer of callous indifference by KBC to people struggling to keep a roof over their head.”

It appears that house prices are reaching their peak before the next financial speculative bubble bursts. Given the skyrocketing unemployment rate, it’s likely that many more of KBC’s performing loans will and already are becoming impaired. It appears that the Irish market has been bled dry and KBC is cutting their losses (which in reality are huge gains at workers’ expense) and are bailing out before the next economic crisis strikes.

Over 1400 workers at KBC Ireland are now facing the unfortunate reality of unemployment. Another case of workers being tossed onto the scrapheap. The former employee we spoke with described the working environment at KBC as “absolutely horrendous.”

“It was a highly competitive work environment where employees were pressured into regularly working through their lunch period. Unpaid overtime was standard. On occasion, workers would perform up to 20+ hours of unpaid overtime in a week in order to meet project deadlines. My team was reporting directly to the CEO, CFO etc. so absolutely no delays or mistakes were tolerated in our work despite being clearly overburdened. I and other co-workers were roared at by managers for making mistakes and for not having the correct aptitude that was being demanded of us.”

“The team in Ireland was considered ‘best in class’ at internal international conferences for being tasked with higher workloads with much less staff to carry out the work. The political intimidation was frightening, as all new staff was informed in the induction that KBC reserved the right to fire staff for their political affiliation. I received major backlash for wearing a ‘Yes’ badge on my jacket into the office during the Repeal referendum. Worst of all, the toilets were usually in a disgusting state with too many staff members using too few facilities. You would regularly be waiting to use a toilet while working which brought even more heat for being away from your desk for too long.“

It has become abundantly clear that competition cannot regulate the housing market, nor does the government have an interest in intervening to build social housing on a mass basis. The capitalist market has proven that it cannot deliver adequate housing for working-class people. It is precisely the private interests of the market that are responsible for the housing crisis.

Real decision-making power in the capitalist system lies in the boardrooms of corporations, behind closed doors, and in particular within the financial institutions. Banks are renowned throughout the world for their discriminatory and predatory lending practices. They’re continually investing billions into environmentally catastrophic industries which are fueling the climate crisis at an alarming pace. They are responsible for fuelling the housing crisis that caused untold misery for working-class people.

The fact that 1,400 workers’ lives have been destroyed by the decisions made by a handful of wealthy people – the board of directors acting on behalf of the shareholders – is an indictment of the capitalist system that claims to be ‘democratic’. It is clearly anything but, as these workers were not part of the decision-making process at all, nor were they given any prior knowledge of this decision which would drastically affect their lives.

All of this needs to change. It’s about time the bankers were reined in. Too many working-class people have suffered through the housing crisis to feed the coffers of these social parasites. We need to take the banking system into public ownership and create one that is democratically controlled by its workforce and representatives of the working class more broadly, as part of an overall plan for the economy. On this basis we can free up the resources of society so that they can be invested where needed, beginning with a major programme to build public housing, invest in free public transport, renewable energy, and create well-paid, low carbon jobs as a way of tackling climate change.

We can’t accept the rule of private bankers and their profiteering any longer. Their capitalist system must go.