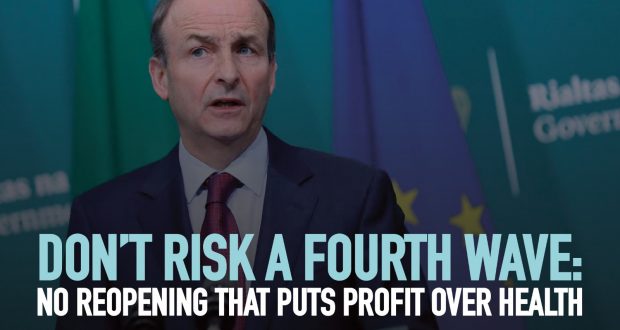 From 4 May on, the government plans further measures to reopen the economy and lift Covid restrictions. These include the reopening of non-essential retail starting with Click and Collect on 10 May,  hairdressers and other personal services on 10 May and the complete reopening of construction on 4 May. Outdoor hospitality and gyms are potentially to open in early June. This will be the third ‘’re-opening’’ after a lockdown. The previous two resulted in a disastrous rise in cases and the introduction of new lockdown measures. These upsurges were driven in the main by business lobbies who put profits over public health.

Many will argue that the beginning of the vaccination programme removes or reduces the need for public health measures. More than one in four of the southern population has received at least one dose of a vaccine. Increasingly, it will be argued that when the most vulnerable sections of society have been vaccinated, we can begin to ‘’return to normal’’ or “business as usual”.

Obviously a mass vaccination programme with priority to the most vulnerable is central to any conceivable plan to exit this crisis. This pandemic has also been extremely debilitating for the majority of people. However, we must sound a note of warning about the dangers of yet another rush to reopen the economy.

Anybody can potentially become seriously sick with Covid. This is especially true when we consider the debilitating effects of ‘long Covid’, which in one study was shown to impact 10% of 18-49 year olds who contracted the virus. Any worker of any age who is sent back to work in a school, construction site or hotel is having their health risked, and should have the right to refuse to work in unsafe conditions.

The effects of a rapid spread of the virus among the unvaccinated population could also be devastating, resulting in a fourth wave and a further extension of the crisis. In Chile, 40% of the population has received at least one dose of the vaccine, but ICUs are reaching capacity as cases surge. This took place after a widespread reopening of economic activity.

The dangers are all the greater in the hands of a government and employer class who have consistently gambled with public health to restore the flow of profits. Already we can see the dangers in the reopening measures introduced so far. Teachers and other education workers concerned over their safety have been demonised, despite a rise in infections of young people after schools were reopened.

Profit is the real concern of the bosses’ lobby. No doubt many workers are suffering due to mass unemployment and uncertainty about the future, but a third dangerous reopening is not the answer.

We need comprehensive economic support for workers who are out of work in this pandemic. Instead the government is planning the winddown of the PUP. We need a full restoration of the bans on evictions and rent increases. We also need a real plan to fight mass unemployment.

This means no reliance on the private sector, but public investment in socially useful industries such as education, healthcare and renewable energy. It means developing a viable and environmentally sustainable industrial base under democratic public ownership. These measures could be funded by a ‘’windfall tax’’ on the big companies and wealthy individuals who have actually benefited financially during this pandemic. The ten richest people in Ireland alone now have a combined €53 billion – nearly ten times what the state has spent on welfare supports over the last year of Covid.

These questions concern the health of all, but particularly the health of workers. Workers have a right not to be forced back to work to appease these demands for reopening. They have a right to demand any and all guarantees of health and safety measures.

The employers, on the other hand, have shown too often that they cannot be trusted with health and safety. All workplace health and safety should be under democratic workers’ control. ICTU and the trade union leadership should back all workers who take action to defend their health.

To achieve a genuinely sustainable end to restrictions we need a stepping up of the vaccination programme. The programme in the south has lagged behind many other countries, but in particular Britain and the North. This is the product of many factors, including our lack of a real public health service like the NHS.

However, key has been the role of the pharmaceutical companies who control the production of the vaccines through patents. They have refused to waive their ‘’intellectual property’’ rights even in the face of a humanitarian disaster such as the one currently devastating the population of India.

Ireland is a centre of the pharmaceutical industry worldwide, and if this was put to use for the interests of ordinary people, vaccine production could be stepped up. Micheal Martin says he asked Pfizer to produce vaccines in Ireland and offered them state subsidies to do so. They refused, and in line with his capitalist worldview, Martin left the matter there.

We need to commandeer and use the capacity we have to produce vaccines regardless of the ‘’property’’ rights of companies like Pfizer. This could mean producing the needed supply in Ireland and making vaccines available for the neo-colonial world which has been pushed to the back of the queue.

From the beginning of this pandemic, working-class people have been hit hardest while the number of billionaires increased and big corporations have taken every opportunity to profit. This Fianna Fáil/Fine Gael/Green Party government has consistently sacrificed our health in the interests of the meat barons, the private hospitals, the hospitality bosses and every other business lobby. We should not buy into attempts to pit our economic position against our health.

Instead we should demand all the necessary measures are taken to fight the pandemic, to secure workers’ health and to defend jobs and incomes. The unequal and profit-driven capitalist system has proven itself incapable of taking these measures. We need socialist change — an economy where the wealth and resources are brought into democratic public ownership and used for the benefit of all.