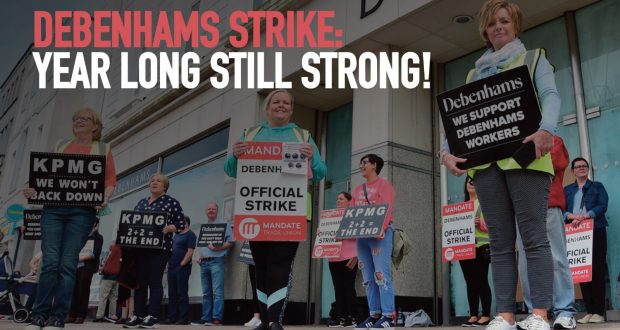 On a number of occasions, as various milestones were passed, the Debenhams shop stewards have said that they did not set out to break records. However, to sustain a struggle for a year in the freakish circumstances of a pandemic and a lockdown is remarkable and further seals the place of the Debenhams workers in Irish labour history.

The demands of the workers remain fundamentally unresolved, that is a just redundancy settlement. Instead, Solas, the state training agency, is now in the process of providing the workers with additional information as to how each of them might benefit from the €3 million training fund offer, the offer that was decisively rejected in January.

There is a possibility of the offer going to ballot again and the workers weighing up whether anything better can be obtained by maintaining the struggle. The strikers will rightly feel that all workers will need to be able to financially benefit from the package for it to even go to ballot.

Remarkably, at present the stock still remains in seven out of the eleven stores. Where it was removed in Blanchardstown, it was done so with the active participation of the Gardaí under level five restrictions. While the picketers had their names taken and were moved out of the way, the scabs were let on their way. People have rightly likened this to Golfgate and the Beacon vaccine scandal as an equally graphic example of one law for the rich and powerful and another for the rest of us during the pandemic.

Significantly, KPMG returned to court to seek the renewal of their injunction but sought with it an enforcement order which meant that the Gardaí could be deployed in this fashion, so as to avoid the spectacle of workers being brought to the High Court on contempt charges for a breach of the injunction. This would have caused enormous outrage among working-class people given the sympathy and support the workers have garnered.

It is entirely legitimate for a stand to be made by workers and supporters to protest against the stock being removed in the manner done in Blanchardstown, with the maximum numbers that can be summoned on our side.

Legacy of the struggle

Even if the training fund is accepted the second time around it does not spell the end of the fight. Many of the workers have said that they place a great value on the idea that their struggle makes it more likely that legislation will be introduced to improve the status of workers in liquidation situations, even if such legislation will not directly benefit them.

Socialist Party member and Solidarity TD Mick Barry has such a Bill drafted, and we want to work with Debenhams workers and their supporters beyond this struggle to keep a campaign going for these changes in which hundreds of thousands of other workers have a stake. The trade union movement has a responsibility to get behind this legislation and actively organise to ensure such an injustice never happens again.

Nobody can fault the former Debenhams workers and their active supporters for the efforts made over the last year to force the government to broker a settlement that the law itself does not clearly provide. Every tactic and initiative in the book has been tried to keep the struggle going and keep it on the political agenda, competing with the other issues of the day.

However it needs to be said that the role of the official trade union movement has been poor. The leadership of ICTU and Mandate from the outset underestimated the potential for this struggle and even when that potential was then demonstrated by the workers on the pickets in the following months, they did not throw their full weight behind the struggle — pushing the boundaries of the laws designed to prevent effective struggle.

Of course this was a very challenging situation for the trade union movement. But if we had a fighting leadership, a strong campaign could have been launched for public ownership of job shedding companies such as Debenhams, with workers at the heart of management. The state is pumping in huge amounts of public funds to maintain jobs right now and is also keeping hospitality on life support.

How different could the outcome have been with a confident union leadership that made the case to retail and warehouse workers to take action such as a one-day strike in support of Debenhams workers, and of legislation such as Duffy-Cahill to be introduced to defend redundancy agreements? 40,000 warehouse and retail workers are Mandate members and many either face or have now had the same experience as Debenhams workers.

The scale of job losses in retail and the overall upheaval caused by Covid in society presented the trade union movement with an opportunity to raise bold demands about how workers should be treated which in ‘normal’ times would be perceived as unrealisable.

So the other lesson from the struggle is the need to transform the trade union movement so that the fighting spirit of the Debenhams strikers is embodied in its leadership and in the tradition of pioneering trade unionists and socialists James Connolly and Jim Larkin. 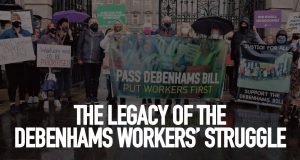 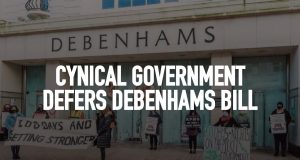 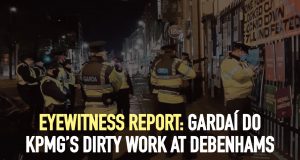