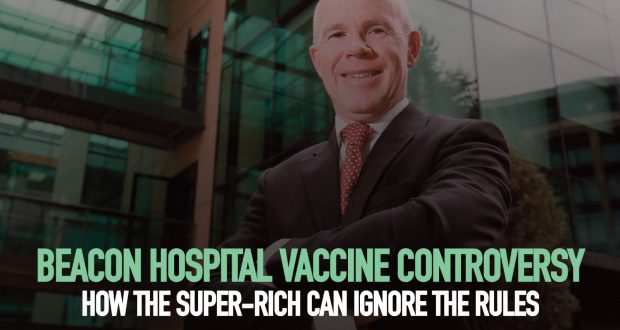 Vaccines being doled out as if they were tickets for a corporate box in the Aviva Stadium. This in essence sums up the scandal surrounding Michael Cullen, CEO of the for-profit Beacon hospital, and the vaccinations he arranged for 20 teachers from the exclusive fee-paying school that his children attend. No doubt many others received vaccines at the Beacon in breach of the guidelines, such as the CEO of the VHI, the state’s largest private health insurance company.

This scandal has naturally provoked outrage on the part of working-class people suffering under this year-long pandemic and frustrated by the slow pace of the Government’s vaccination programme. It echoes the events surrounding “Golfgate” in August last year, when representatives of the banking world, the judiciary, and political establishment, flagrantly breached the guidelines surrounding Covid. Both incidents illustrate the naked sense of entitlement on the part of the super-rich, golden circle that dominates Irish society.

Another notable example of the “rules are made to be broken” mindset of the ruling class was displayed in the early hours of 1 April in Blanchardstown, when KPMG, with the assistance of Gardaí was allowed to move stock from the former Debenhams store. Apparently breaking strikes is now an essential service.

St. Gerard’s, the private school at the heart of this scandal, is in Bray, Co Wicklow. One year’s tuition for a child will set you back €7,420. No doubt this is mere pocket change for someone on Michael Cullen’s CEO salary.

Fee-paying schools are bastions of class privilege, which provide opportunities for the privileged and wealthy, both parents and in later-life students, to “network” — as this case shows. On top of the myriad of tax breaks they are gifted, this section of society benefits from the fact that the state subsidises such schools to the tune of €100 million per annum, largely by paying the salaries of its staff.

This ensures that fees are kept at a relatively low level compared to private schools in places like the United States. On top of this, the state’s system of corporate welfare offers CEOs from multinationals who choose to reside here a €5,000-a-year tax-free allowance to offset the fees they fork out to their children’s private schools.

This whole elitist system is a disgrace, and the subsidisation of private education must end. Its staff and resources should become integrated into a fully-funded, secular, public school system.

The private Beacon Hospital is owned by billionaire Denis O’Brien, who has amongst other things amassed his vast fortunes through his status as a tax exile and securing lucrative state contracts in the past. His investment in healthcare is obviously driven solely by the pursuit of profit, not by the well-being of patients. In fact, the well-being of patients is not profitable, which is the fundamental problem with for-profit healthcare.

He is not the only tax-avoiding billionaire to make a tidy sum from our privatised health system. The notorious beef baron, Larry Goodman, whose industry’s callous disregard for its workforce has repeatedly fuelled the Covid crisis in the South, has invested his fortunes in the Blackrock Clinic, the Hermitage and the Galway Clinic.

The Beacon is the 444th largest company in the state. In 2019, its operating profit came to €7.2 million, more than double that of 2018. The total revenue of the hospital is €142 million. It is emblematic of everything that is grotesque about our two-tier health system. One part of this system is its public side, made up of dedicated and committed health staff, but the victim of decades of cuts and underfunding.

Many working-class people, if they have the means to do so, feel compelled to take out private health insurance and in turn, have access to the services provided by private hospitals. What is truly disgusting is that side by side with austerity-hit and cash-starved health services, the likes of O’Brien and Goodman, and the super-rich generally, can avail of so many tax breaks and perks. They can then exploit the fact that many are forced to go private because of the public healthcare crisis, and amass further profits for themselves through investments in a growing private healthcare sector. It exemplifies everything that is rigged about capitalism.

All private hospitals must be brought into permanent public ownership, with no compensation for its shareholders. They must be integrated into a top-quality, one-tier, public health service that is free at the point of use and democratically controlled by its staff and the wider working class. Such democratic control must start by ensuring that the vaccine programme is put under scrutiny to ensure that it is administered in a fair and equitable manner.

The wealth is there to fund the vital services we need, but this will not happen as long as we live under a system designed to work for a tiny, privileged few, not the majority. The fortunes, profits, and resources that the capitalist class has made at our expense must be seized and taken into democratic public ownership, from which we can then democratically plan the economy to cater to all our needs.