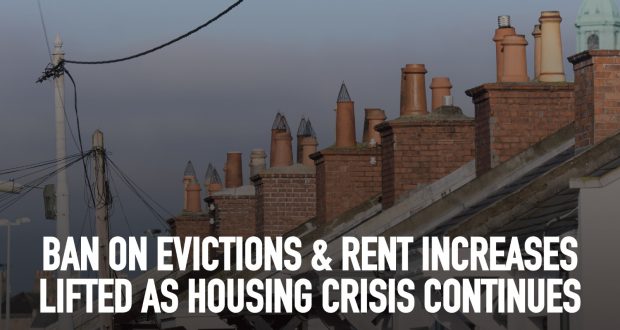 The government has recently ended its blanket ban on evictions, opening the way for predatory landlords to evict and increase rents. This is at a time when unemployment remains at 25% and youth unemployment at 59%. With young people making up more than half of the unemployed, this is a potential disaster for those who are already hit hardest by the housing crisis.

For decades the state’s solution to the housing crisis has been based on incentivising the private market to meet housing needs. Cult like adherence to a neoliberal approach to public service provision is particularly sharp in the housing sector where rents continue to increase. In 2020, Cork, Waterford and Galway saw rent hikes 4.8%, 5.6% and 4.6% respectively despite the previous ban on evictions and rent increases.

Market dogma suggests that we should see reductions in rent given the collapse of tourism and the increase in vacant properties as a result. However, a recent Sunday Business Post investigation found institutional landlords are essentially price fixing, using incentivised rates to artificially mask the increase in supply and provide lower rents while maintaining the high market offer — circumventing rent pressure zone restrictions which limits price increases on a year-on-year basis. Protecting the overall value of the building is the priority of many institutional landlords, even if it means sacrificing annual revenue as it is the latter which determines the value of the portfolio the asset lies within.

The system is rigged in favour of landlords, developers, and speculators while working-class and young people must contend with the rising cost of living, stagnating wages and the threat of long-term unemployment. Developers are now prioritising maximisation of short-term profits through focusing on student accommodation, “Build to Rent” developments and hotels which can avoid the limited rent control provisions.

Property cheerleaders in government and the media welcomed the emergence of institutional landlords as a modernising force in the rental market. The reality however was large multinational corporations and pension funds having a vested interest in maintaining eye-watering levels of rent for decades to come.

Break with the system

The capitalist market, rooted in the ruthless profiteering of vested interests is incapable of  meeting the housing needs of working-class people. The bans on evictions and rent increases should be fully reinstated and rents should be slashed to affordable levels. We need a major programme to build public homes on public land. This should be linked to taking hoarded land and the major construction companies into democratic public ownership.

Implementing these policies, which challenge the state’s ideological framework and the logic of the profit system, will require a mass movement of tenants, workers, and young people. This could lay the foundation for building a new party of the working class that fights for an end to the rule of the profiteers and their system.