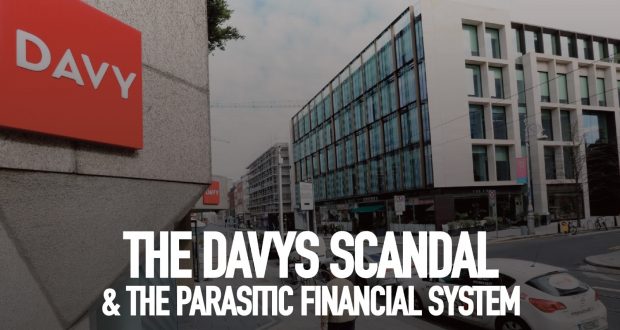 A new scandal has hit Ireland’s golden circle, this time involving the largest stockbroking firm in the state, Davy. The company has been fined €4.13 million by the Central Bank after it emerged that senior members of the company engaged in what amounts to insider trading.

This involves information being acquired via one’s position in a company to personally enrich oneself. The breaking of this story comes against the background of continuing lockdowns and enormous hardship being placed on the shoulders of working-class people.

In 2014, Davy was approached by a developer from the North, Patrick Kearney, to sell off a bond in Anglo-Irish Bank – the bank at the heart of the 2008 banking crash that was bailed out at enormous cost to working-class people in the form of vicious austerity. It has been revealed that 16 senior members of the company purchased the bond via a front company, O’Connell Partnership. It is estimated they did so at a price that was 60% less than its real value. A large tranche of the bond was later sold to a New York fund manager at an unknown price, but it beggars belief that this consortium did not make a tidy profit.

The fact that this scandal is only coming to light after seven years, which in turn came after the bailout of the banks to the tune of €64 billion, begs even more questions. “White-collar crime” is clearly a lesser one for the state, given that it is usually super-rich people who commit it.

This scandal is not without precedent as far as Davy is concerned. In May 1993, the company was fined £150,000 when it emerged that its senior executives, including some of those implicated in its recent scandal, had used front companies to purchase 15% of the stock in Greencore. This company had formerly been Irish Sugar, a semi-state company founded in the 1930s and built up over decades by its workforce and working-class taxpayers, only to be privatised by the then Fianna Fáil government in 1991.

Insider trading, as exposed in these above cases, is only a symptom of a deeper rottenness at the heart of capitalism. It is illustrative of the web of connections that the super-rich can utilise to enrich themselves and is a significant feature of the dealings of the top companies that dominate the global economy. Wealth creation, or more accurately profit-making, increasingly has a fictitious character, not reflecting the real wealth that’s created in society by the collective labour of the working class.

A notable example of this is the way companies internationally, flush with money from tax cuts and cheap money from the world’s central banks, are using their resources to buy up their respective shares on the stock markets. The purpose of this is to artificially inflate the price of shares so that CEOs and shareholders (the majority of whom are super-rich) will garner further bonuses and dividends.

While insider trading such as that in Davy may be illegal in this state and contravene EU regulations, it is only because it is so blatant and may undercut other sections of the capitalist class.

Karl Marx referred to this system of finance capital as being “an entire system of swindling and cheating”. Stockbrokers like Davy are one of the cogs in this system. They act as middle-men for those companies and the super-rich who wish to invest their profits and obscene fortunes in buying and selling shares and the plethora of other financial products capitalism has brought into being. Of course this scandal shows how intertwined they are with the big players on the financial markets and the banks. They also play a role in selling bonds, or government debt. An indication of the tidy sums they make is the fact that Davy has received €4.5 million in fees by selling bonds on behalf of the Irish state since January 2020 alone.

A system of “swindlers and cheaters”,

The system run by these “swindlers and cheaters” should be ended. Each day they gamble trillions of euros – the wealth that we workers collectively create – in their glorified casinos, aka financial markets. In the last decade they have, alongside institutions such as the EU and IMF, used their power to dictate programmes of austerity to countries such as Greece and Ireland so that their gambling losses can be written off and they can further enrich themselves.

Ending this dictatorship of the markets necessitates a working-class struggle for socialist change. A struggle that will seize the major companies and financial institutions that dominate the economy and bring them into public ownership under the democratic control of working-class people. On that basis, we can plan the economy and direct society’s resources in a productive and humane manner, which can raise our living standards and safeguard our ecosystem.