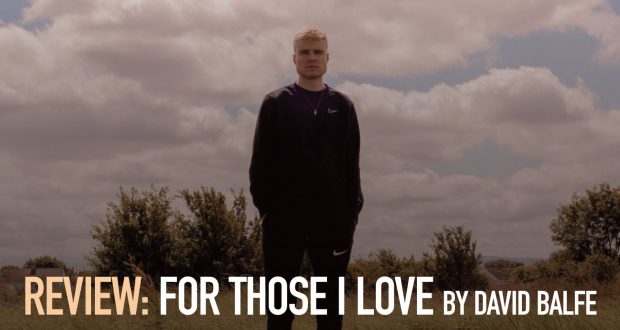 Review: For Those I Love

For Those I Love by David Balfe

David Balfe is the mastermind behind the solo project For Those I Love and his self-titled debut in which he showcases his unique take on the themes of love, loss and friendship. Balfe appreciates the power of words and poetry as he paints a picture of the Northside areas of Dublin, specifically Coolock, Kilmore, and Donaghmede. The textured electronic arrangements underpin the intriguing storytelling and spoken word rhymes of For Those I Love.

Balfe recalls the memories and thrills of childhood and what followed, which was a time of accelerated change. The pain and sudden loss of Balfe’s best friend Paul Curran can be felt on tracks ‘You Live / No One Like You’, ‘The Shape Of You’, ‘Leave Me Not Love’, and ‘I Have a Love’. The emotional hardship is evident, as Balfe’s struggle of mourning his best friend is laid bare.

The album’s third track ‘Top Scheme’ has a crisp electronic sound that is sharp and clean. Balfe is hyper-articulate about the experience of hard-pressed working-class communities. The music video that accompanies this track uses flashing visuals and quotes to highlight the government’s failures on public housing, homelessness, Direct Provision, mental health services, prison reform, drug policy reform, and institutionalisation. The visuals reflect a growing consciousness among young working-class people who have realised that the system is rigged against them.

Balfe’s refreshingly candid remarks describe an almost dystopian reality in which young people who are part of a locked-out generation cannot afford housing due to the crippling cost of living, extortionate rents, and being priced out of the housing market. The psychological impact of having no control over your economic and housing situation is profoundly negative. It comes as no surprise that rates of depression, as well as drug and alcohol dependency, are more prevalent among people living in economically deprived areas. The words “What is my incentive to stay here?” printed across the screen reflects this. This is a direct result of the massive wealth inequalities in Ireland and the top-down organisational structure of capitalism, which allows no real social mobility for the working class, “Because getting out seems like no stage”.

Balfe recognises that politics is not an isolated abstract concept that only matters during elections, it is the everyday austerity measures that punish the poor for the sickening greed of the rich, “Your Da crashed the bank but kept his job”. Balfe also calls attention to the lack of community mental health services available and the expense of private counselling. Songs ‘The Myth / I Don’t’ and ‘Birthday / The Pain’ convey living for the weekend as a form of escapism from the weekly struggles. The outro of ‘The Myth / I Don’t’ explores personal anxieties and feelings of alienation. ‘Birthday / The Pain’ is a bold track that captures the anguish of youthful traumas. The old school dance beat is the perfect backdrop to Balfe’s resonating words. ‘To Have You’ is slow to ignite as the momentum builds gradually introducing more electronic elements. Its sweeping sounds and atmospheric layers have a heart-lifting and reflective quality.

For Those I Love is a major achievement. The songs are stark, and the arrangements are precise. The conviction is palpable as Balfe’s assertive vocals emerge from catchy hooks and serene synth passages that envelop. The album demonstrates a rich mix of striking music that is introspectively nurtured. It is apparent that Balfe values a sense of community as his songs emphasise the resilience of love, family and friendship, which help combat the hard times. His songs draw attention to the working class and the vulnerable who suffer the most under capitalism as they are made to feel disempowered and marginalised.

It is important to stress that the capitalist system is not broken – it is functioning exactly as intended. The destruction and suffering inflicted upon working-class communities is an invariable outcome of a system, which by design treats workers as expendable. However, oppression and repressed anger builds resistance and perhaps that is the incentive for young people to stay, to build a society that values human life not the profits of a tiny minority.