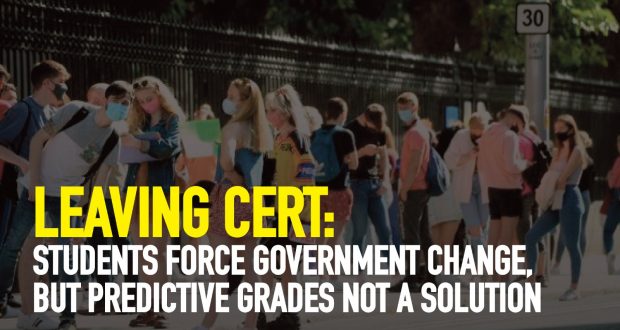 Blindsided by the third wave, the government maintained a fiction into January that a ‘traditional’ Leaving Cert could take place this summer. Such was Minister Foley’s pigheadedness that it took a revolt spearheaded by ASTI members, coupled with a fresh upsurge of online campaigning by students, to force a retreat on what would have been a disastrously premature return to the schools.

However, the Government and the Department of Education, aided by a sustained campaign of media vilification of teachers, have brought us to the point where there is a fresh schedule for a gradual return to schools in the months of March and April and a hybrid Leaving Cert based on the students having the option for a traditional exam and/or predicted grades.

Students organise from below

The outcome chimes with the dominant demand that emerged from Leaving Cert students via both the Irish Secondary Schools Union, but more significantly from the many organic social media-based campaigns that sprung up around the country. Mick Barry TD and other Socialist Party members were played a prominent role in this campaign, organising online Zoom meetings with often hundreds of Leaving Cert students in attendance. We argued that students should not be forced to sit this draconian exam in the context of Covid and for third level institutions to be opened up to ensure that all those students who wish to go on to college or university should be able to do so.

This self-organisation of secondary students is a very welcome development and should be seen in a similar light to the increasingly active engagement by the school student generation around climate change that was in evidence before Covid. This will come back on the agenda when conditions allow for real-world protest activity.

It is understandable that a fallback option of choice of a predicted grade from the perspective of many individual students suffering from stress will be greeted with a measure of relief. Between missing three months of schooling last year and two months so far this year, alongside the extreme mental distress felt by many students themselves and/or witnessing it in their peers because of the uncertainty, the overriding immediate concern was that there be no forced Leaving Cert. What this also highlights again is the threadbare mental health services for young people.

However, the opposition and concern among many teachers to predicted grades and to a return to school in March, well in advance of serious headway with the vaccine rollout, is also entirely legitimate. The points we make about a rise in school student activism here and internationally can also be applied to teachers who in many countries, including the US and Britain, have had to engage in militant resistance to the unsafe reopening of schools.

On the health and safety front, the opposition among teachers may well be vindicated by an uptick in cases and consequential illnesses or worse among teachers. The opposition to predicted grades among teacher unions is well-founded and based upon not just the practical problem of the dearth of course work from this year to base it upon. It also ties in with the resistance they have had to put up over the last decade to marking and ranking their own students for Leaving Cert due to its subjective nature. Like last year, predicted grading will again involve teachers effectively having to rank their students in line with a forced distribution bell curve.

There has been a long-term objective on the part of governments and the Department of Education, in any event, to move away from a terminal exam towards a more classroom-based assessment model. This is something that has been correctly resisted by the ASTI and TUI because of the potential for bias not encountered in an anonymous exam and because of the exposure of teachers to parental and student pressure over marking. Combined with this, more classroom-based assessment can increase stress all year round with additional workloads for students and teachers.

Insofar as there is course work upon which predicted grades can be made the class bias of outcomes at second level is likely to be more pronounced. This is due to the resources and equipment more affluent students can access at home to assist with assignments than would be the case even with the traditional Leaving Cert.

The false choices that became the mainstay of the debate on this year’s Leaving Cert arose due to a combination of historic underfunding, but also a wrong premise that sees the 100-year-old Leaving Cert itself as a necessary permanent fixture in education.

Ireland continues to have the highest class sizes in Europe. The spend of the Irish government on education as a percentage of GDP is the fourth lowest in the OECD. The cuts imposed in the course of the austerity years have still not been reversed. Any additional spending this government and its predecessor can point to in the last five years has barely kept pace with the demographic bulge of young people first experienced a decade ago at primary level but now working its way through second level.

The crisis at third level if anything is starker. The public funding per student is 43% less than pre crisis 2008.

The Irish Universities Association, effectively a neo-liberal think tank representing the interests of the heads of administration, are in favour of funding models that look everywhere except increased state investment. Besides seeking the reintroduction of full fees for all students, they have crudely referred to students from outside the EU as a form of ‘foreign direct investment’ on the basis that they are obliged to pay the top five figure fees. The whole drive for expensive purpose-built student accommodation that has sprung up in city centres around the state was intended to accommodate the sons and daughters of a global wealthy elite. The fact that Irish third level has been out of bounds for these students during Covid has only made the funding crisis in third level more acute.

These factors have a direct bearing on the Leaving Cert and the points system more than ever serving as a means to ration insufficient places to students from low- and middle-income backgrounds.

The Socialist Party through our public reps, school student members and teacher union activists have argued consistently that the best way to reconcile the safeguarding of student mental health and the opposition to predicted grading among teachers is to massively expand third level places. On this basis, the Leaving Cert itself can be abolished in favour of open access to third level for all students.

Open access to third level would represent a leap forward in education comparable with the universal open access to secondary schooling almost 60 years ago which at the time was greeted in many establishment quarters as an extravagance. Once universal access to second level was established the old Primary Cert that pupils had to undergo at the end of their primary schooling was effectively redundant. The motivation of the government at the time was to align with the needs of business. Our motivation is about what is necessary for the development of young people to their full potential in the 21st century.

Achieving universal access would require expanding third level places by some 25,000 and an additional 10,000 lecturers, again a scale of expansion that has been achieved historically when we went from a position in the early 1970s where 3.2% of the population went to third level to a clear majority today. The problem has been a consistent lag between the amount seeking third level and the places available. Universal access to third level should be combined with the abolition of third levels fees, a living grant for all students and the provision of state built and affordable student accommodation.

The current leadership of the secondary school teacher unions in Ireland, the ASTI and TUI are both ideologically imprisoned in a mindset of how things have been done. Without the socialist economic policies that would be needed to properly fund education at all levels and as a minimum reverse all the impositions on teachers, the union leaderships, while putting open access on the agenda during the recent negotiations, fundamentally were resting on the traditional Leaving Cert as their least worst option — placing them at odds with students. 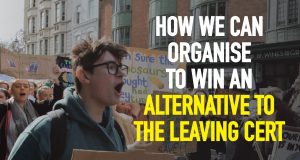 How we can organise & win an alternative to the Leaving Cert 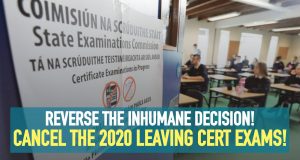