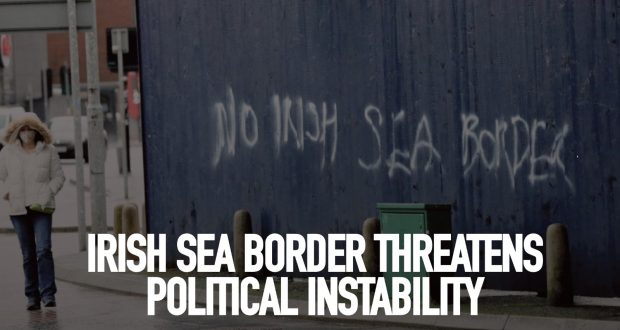 As part of the Brexit process, the Northern Ireland Protocol – which came into force on 1st January – has put a regulatory border down the Irish Sea, as the North remains aligned to the EU single market for goods. The level of disruption to supply chains has been more dramatic than most predicted. This may partially be down to ‘teething problems’. However, regulatory checks are due to become more stringent from 1st April, when the so-called ‘grace period’ ends, including for meat products and other foodstuffs.

The political impact of the Protocol has been even more dramatic than its economic effects, however, provoking a sharp reaction from Unionism. At root, this reflects the widespread perception within the Protestant community that they are being forced into a de facto ‘economic united Ireland’. Alongside the mounting calls from nationalists for a border poll and the rise in support for Scottish independence, this adds to the growing sense of insecurity and isolation of many Protestants, who feel that the Union is unravelling and they are threatened with becoming a minority in an all-Ireland state against their will.

The DUP and Arlene Foster have taken much of the blame for this outcome. They propped up the Tory government which then betrayed them by negotiating this deal, and are seen as having failed to lead any meaningful resistance to the prospect of an east-west border. One poll suggested DUP support had slumped by 9%, leaving it in second position behind Sinn Féin, with much of this support going to boost the hardline Traditional Unionist Voice. The DUP are frantically trying to win back this ground, belatedly campaigning at Westminster and in the courts for the Protocol to be scrapped, while also stepping up their reactionary sabre-rattling on issues like abortion.

Tensions around this issue have already resulted in threats against port staff in Larne, who were temporarily withdrawn by the local council. Posters opposing the east-west border have appeared in towns across Northern Ireland, with some making comparisons to the resistance against Home Rule over a century ago. A spokesman for the Loyalist Communities Council – representing the UDA, UVF and Red Hand Commando – said that they may deem it necessary to “fight physically to maintain our freedoms within the UK.”

This is a warning to the workers’ movement of the dangers that lie ahead if it fails to put its stamp on events. The British government and the EU – representing different capitalist elites – have cynically used the interests of ordinary people in Northern Ireland as a political football, threatening to destabilise the situation here by hardening borders, either east-west or north-south. The sectarian forces in both communities will seek to capitalise upon the increased tensions arising from this deal, which can have disastrous consequences.

Representing over 200,000 workers from all backgrounds, the trade union movement has huge potential power. An emergency conference of union activists should be called to discuss how to defend jobs and livelihoods, but also how to challenge paramilitary threats against workers and resist any slide towards conflict. Ultimately, this will require the building of an anti-sectarian political voice for the working class, which unites workers and young people around socialist policies, in opposition to the pro-capitalist politicians of all hues.