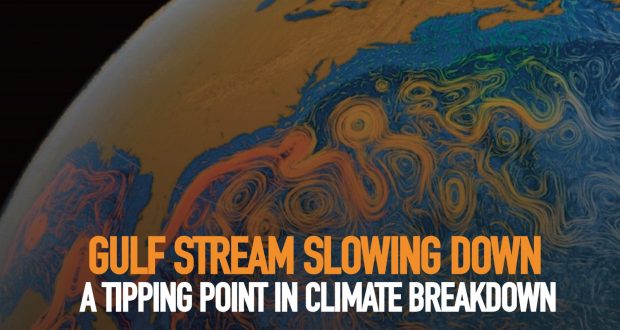 Climate change is becoming less and less of a gradual, linear process. Rather, the rate of increase in extreme weather events is becoming increasingly exponential. This can be explained by climate feedback loops. For example, rising temperatures resulting from CO2 emissions from industrial processes cause drier climates. This increases the frequency of forest fires, which in turn releases even more CO2. The same happens when rising temperatures cause trapped methane gas to be released in the Arctic as the permafrost thaws.

One alarming consequence of rapid global warming was reported in a recent study published in the prestigious scientific journal Nature Geosciences. The authors reported that the Atlantic Meridional Overturning Circulation – also known as the Gulf Stream – has been steadily slowing since the onset of the industrial revolution in the 19th century. Worryingly, however, the rapidly rising temperatures at present could place us at a tipping point within this century, beyond which the system could irreversibly break down.

The Gulf Stream carries warm water from the Gulf of Mexico up along the east coast of the United States and across into the North Atlantic Ocean where it cools and returns south again along the west coast of Europe. As a result, the current plays a critical role in controlling the climate of both the eastern United States and western Europe.

The authors explain that warmer temperatures are likely slowing the Gulf Stream because freshwater from melting ice sheets in the north is decreasing ocean salinity (the amount of dissolved salts that are present in water). This is a massive problem because the Gulf Stream’s flow is driven by “deep convection”, in which warm water cools in the north, becomes denser as a result, and sinks in a southernly direction. As salinity decreases in the north however, the water becomes less dense, thereby slowing convection and the Gulf Stream itself. The consequences of this are almost definitely going to include increased flooding along the east coast of America, as well as significantly colder winters and warmer summers in western Europe.

Like the slowing of the Gulf Stream, the Covid-19 pandemic was not an unforeseeable act of God. Rather, both are inevitable outcomes of a global economic system that could not be more incompatible with the planet’s climate and its finely tuned ecosystems. It is the internal logic of capitalism, an anarchic system driven by the pursuit of short-term profit, that sees it as too costly for businesses to minimise the environmental impacts of their operations.

As a result, these impacts are externalised to be dealt with by wider society, with the world’s poorest being worst affected. After all, a super-rich person can simply relocate away from a flood-prone region or avail of private healthcare when underfunded public hospitals are overrun with victims of climate-driven pandemics.

The urgency of climate action

Seeking to simply ‘make fairer’ a system that is fundamentally based on exploiting our planet and its people is beyond futile. Such a reformist approach assumes that the capitalists will tolerate measures that affect their profits. It assumes that an inordinate amount of power to influence politicians and elections will not remain in the hands of the capitalist elites. It assumes that capitalist politicians will not shift the burden of climate action onto the backs of struggling working-class people. Finally, it assumes that a strategy of tedious and painstakingly gradual reform will be sufficient to meet the urgent response that is needed to avert climate catastrophe.

In June of last year, a study published in the peer-reviewed scientific journal Nature Communications demonstrated clearly that it is affluence that is intrinsic to a capitalist economy that is the main driver of climate change. The study basically concluded that nothing less than a planned socialist economy, as distinct from a reformed free market economy, is likely to be capable of radically reorganising production such that it is brought into harmony with the ecological boundaries of the natural world.

In other words, it is only decisive revolutionary socialist change – which invariably will require a mass party of the working class to defeat capitalism and its political representatives – that can deliver the type of change that is needed.