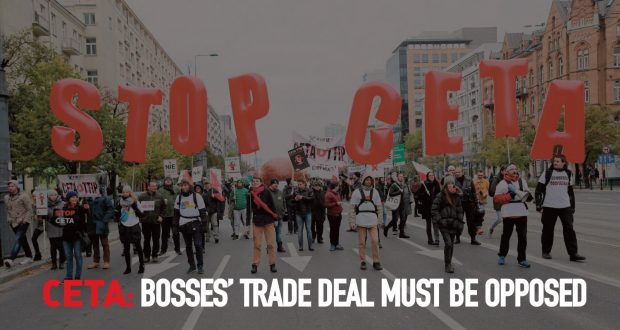 The CETA trade deal needs to be met with strong opposition by working class people and the trade union movement. This is an investor rights treaty, allowing companies to sue states if their policies result in a reduction in their profits. as with other trade agreements, its purpose is to run over any obstacles to the companies making money,

CETA was the first of a series of proposed trade deals passed at a European level and was followed by the Mercosur deal with a block of South American countries and the TTIP deal with the US that was put on ice during the Trump administration. Most of CETA has been in provisional operation for the last two years.

With or without TTIP, CETA will be used by US-based companies with Canadian subsidiaries to pursue such claims in Europe. Canada has previously had their manufacturing sector devastated by NAFTA. CETA will open the door to further attacks on workers’ rights and conditions on both sides of the Atlantic.

It further copper-fastens the EU’s policies of shutting off the potential to reverse privatisations. Among the companies that stand to benefit from the deal is the largest private landlord in Ireland, IRES a Canadian company. It does not take much to imagine such a company suing to reverse any policies aimed at reducing rents.

CETA will be used as a further excuse for future governments to oppose any legislation that would contradict the wishes of corporations subject to the agreement.

While in opposition, the Green Party had opposed this deal, with Eamon Ryan hopping in front of whatever microphone would have him to state this. Once ensconced in government, its ministers have predictably changed their tune.

The opposition of environmentalists to the deal has good cause. The deal is an obstacle for legislation that would protect the environment if a corporation felt it contradicted its rights. Ratification of the deal can also make it more difficult to stop the import of fracked energy, which is responsible for one third of the world’s methane emissions.

Green Party representatives have pointed to their belief that the deal will pass with or without their support as a reason to support it in the latest representation of that organisation’s pointlessness and failure to effect change, even within their own limited criteria.

After attempting a quick vote on the issue before Christmas, fears of losing a couple of Green TDs pressured the government to first postpone the vote and then send it to an Oireachtas joint committee for review. The idea behind this is to allow the Greens enough space for most of their TDs vote it through and minimise any disruption to the coalition rather than any real investigation into the deal. The usual arguments about not wanting to hold up European treaties will come with an added “what with Brexit,” to any opposition to damaging policies emerging from the EU.

It will take organisation and pressure from below to defeat the CETA deal. This is a major challenge that the trade unions must step up to. We cannot tolerate a deal that gives big business a further license to profit at our expense of our living standards and that of the environment.