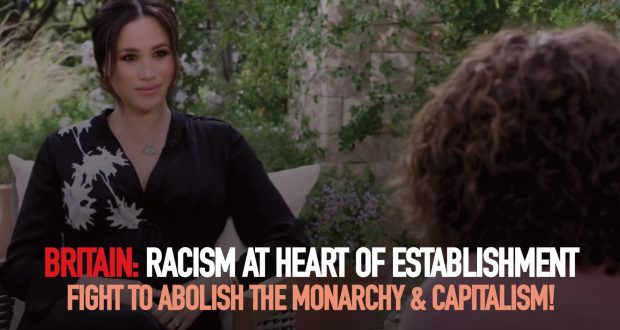 By Nelly Rowley, Socialist Alternative (our sister organisation in England, Wales and Scotland)

On 7 March 2021, an interview with Prince Harry and Meghan Markle was released, revealing scandalous information blowing the lid off the reality of Royal life. Harry revealed to have been questioned by undisclosed but senior members of the Royal Family about “concerns and conversations” of “how dark” the colour of her then-unborn baby’s skin would be.

Markle relayed to interviewer Oprah Winfrey about experiencing suicidal thoughts, owing to press scrutiny as well as  the isolation that she was subject to as a member of the Royal Family. The pair say that despite reaching out to those around them, they were denied any support or help, with Markle allegedly being told that it “wouldn’t be good for the institution”.

In explaining her reasons for wanting to step back from royal life, Meghan also spoke about the treatment of her by the UK media and of the oppressive and racist overtones that are clear throughout when compared to the portrayal of Kate Middleton.

One shocking example of this from a UK tabloid showed Kate ‘tenderly cradling’ her baby bump, while a separate article talked of Meghan being vain or ‘acting’ as she held her baby bump in an identical manner. This misogynistic critiquing of pregnant women’s behaviour is entirely in line with the general press and capitalist establishment obsession with Royal pregnancies, with the undertone being that these women have fulfilled their only role – to produce an heir. But it is also blatant racism behind the different treatment the women received, and those that deny this – particularly those in the tabloid press – are very much a part of the problem.

Should we be surprised?

While many have been shocked by revelations of racism in the Royal Family, it will come as no surprise to others. This institution has built its mammoth wealth and power off the back of hundreds of years of colonialism, slavery and oppression of the working class, even pre-dating capitalism as a system.

This is just another blow for a dying institution. Only last year, news emerged of Prince Andrew’s well-documented links with billionaire sex abuser Jeffrey Epstein. Earlier this year, news emerged that the Royal Family are not as politically neutral as they pretend to be, with the Queen blocking over 1000 pieces of parliamentary legislation that risked revealing the real scale of Royal wealth, which revealed the real scope for the monarch’s power to be used as a ‘reserve weapon’ against movements of the working class in times of ‘crisis’.

Since the release of the interview, there has been outrage in the news and across social media. Piers Morgan – ever the attention-seeking bigot – stormed offset on Good Morning Britain yesterday morning after expressing his dislike for Markle and having attempted to shut down concerns around the Royal Family.

This points to a key issue. While Markle leads a millionaire’s life, removed in many ways from the experiences of many other oppressed and working class people, it is this experience of being dismissed, questioned and made to feel like an outsider which will relate to the millions of people who experience racism, misogyny and mental health issues on a daily basis. And the vast majority of people will not have the material means to partially escape and expose it in the way that Harry and Meghan do!

Capitalism, and outdated pre-capitalist institutions like the monarchy, hoard power and wealth around a select few, leaving them to believe they are untouchable. It is easy to see the tools used by the 1% to continue to grow their wealth and keep power and wealth from the hands of those it belongs to.

Role of the media

Through victim-blaming and extreme bias, the capitalist media want to shift public attention from the real deep-set issues within society. This is not a sustainable system by any stretch of the imagination. As long as capitalism exists, people will be silenced and demonised all to keep the 1% at the top of the pile.

These claims made by the couple echo years of deep-rooted racism within UK media as well demonstrating plainly that institutions, such as the Royal Family, are centered around elitism, privilege and the oppression of others.

As socialists, the monarchy goes against everything that we believe in. The idea that a person can be born with the right to rule is backward, having no home in the future that we are fighting to build.

Ordinary working people and all those who experience oppression must be the people who get to decide how we run society and what happens to the wealth that the capitalists sit on. We cannot blindly trust the few who have no real experience of the world that they control.

For those years where Meghan was in ‘good standing’, the Royal Family appeared to utilise her as a way of rebranding the monarchy as a ‘progressive’ institution, ‘modernising’ by having a woman of colour in a high position. Yet all it has achieved is showing how the current system is rotten to the core.

The capitalist system has never, and will never, exist without a distinction between ‘us’ and ‘them’. Under the crushing blow of the pandemic, this something that people are beginning to realise. The current system is unsustainable from any angle. We need change.

Meghan marrying Prince Harry was claimed to signal to the world how we are moving forward as a society. Instead, it has shown that the system repeatedly falls into racist and elitist rhetoric, even when given the chance to move forward.

But as Marxists and socialists, we can show the real power we have to change things. It is vital that we show solidarity with those who speak out against racism and sexism – even those that come from elite circles. But doing this requires an uncompromising socialist-feminist approach, taking action against workplace racism, sexism, and sexual harassment, calling for unions to organise and exposing the weak faux-‘feminism’ and ‘anti-racism’ of the ruling class.

We will never be able to properly address these issues until we challenge the system that creates the conditions for these oppressions to happen. We must fight for a democratic socialist society, where all people from every background will be able to speak out against oppression without retribution!