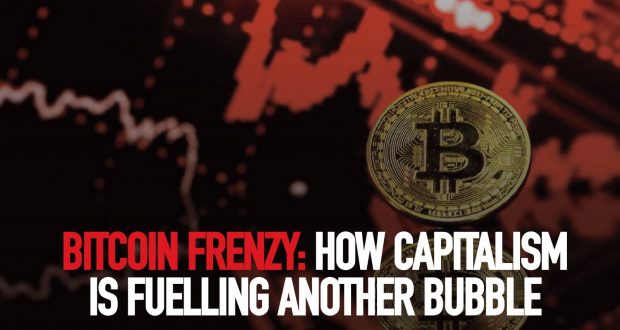 Bitcoin frenzy: How capitalism is fuelling another bubble

The stock markets took a battering when Covid first hit in early 2020, but governments pumped them full of trillions in stimulus money. Thanks to this, Wall Street has swung wildly from a deep crisis to a series of absurd bubbles. Tesla has grown incredibly bloated and volatile, and it’s not the only one.

“The entire thing [is] bonkers. Companies with no revenues, and no working products, [are] sporting multi-billion dollar valuations”, wrote Jamie Powell in the Financial Times (5 March 2021, writing specifically on the electric vehicles bubble). Now the bottom is falling out. It took the capitalists over thirty years to start investing in electric cars. Now they’re doing so in a volatile, wasteful, irrational, chaotic fashion that will bring on a crash.

Google predictive search reveals that many are comparing the Bitcoin bubble to the Tulip Mania. In this bubble that happened in the Netherlands in the 1630s a single tulip bulb was briefly worth over ten times the annual income of a skilled worker. But at least tulips look and smell nice; the same cannot be said for Bitcoin. It is simply a record of transactions existing online. And the wild swings in value make the Tulip Mania look reasonable by comparison.

In its 12 years of existence (If ‘existence’ is not too strong a word) Bitcoin has never functioned as a currency but only as a speculative commodity. Although more vendors are now accepting it, it’s still just a toy that a relatively tiny number of people use for gambling.

There are Bitcoin enthusiasts who don’t just think it’s a good bet; they think that it’s an amazing new invention that will make the world a better place. These true believers insist that because cryptocurrencies like Bitcoin are not mediated by any bank or state, they will produce more fair and efficient outcomes than traditional currencies. So there’s no need to challenge the system politically or to redistribute wealth – the magic internet money will solve our problems. But to believe this requires a deep faith in ‘free markets,’ the same fairytale that led to the 2008 crash and to the cruel austerity policies that followed.

We are told that Bitcoin is immune from inflation because it’s finite and governments ‘can’t just print more.’ This inflation-phobia is another hallmark of free market ideology. In reality, not being able to issue more currency is a huge disadvantage. In any case, those who fear inflation should avoid Bitcoin like the plague; it’s the most unstable and volatile commodity in the world. And the current surge in Bitcoin’s value does not reflect some monetary revolution – it’s a direct result of government stimulus, that is, of inflation!

Cryptocurrencies are anonymous, so hypothetically they could be of use to underground revolutionary movements. But in the here and now they would obviously help organised crime, trafficking, and the murky dealings of intelligence agencies. Few would be at all surprised to learn that ‘Bitcoin Jesus’ Roger Ver was once convicted for selling explosives on eBay.

In recent decades the wealthy have stopped investing in production and infrastructure, and instead poured their money into Wall Street gambling and complex financial instruments. Prices are normally based on real value, that is, on the human labour embodied in a product. But finance capital in its drive for profit leads to bubbles in which the price of a commodity goes a long way from its real value. These bubbles lead to crashes in which working class people suffer and are put on a regime of austerity. The wealthy play their games with their financial toys; we get priced out of housing in a bubble, and are last in line for the bailout in a crash.

Rather than solving this obscene waste and financial chaos, cryptocurrencies are the ultimate expression of it. The talk of ‘decentralizing currency’ and ‘taking on the banks’ appeals to people’s natural desire for liberation from this crazy system. But it’s all hype designed to get us to buy into yet another con. The small investor who has bet their life savings on a fraction of a Bitcoin is utterly at the mercy of market forces. The likes of Paypal and Tesla hold all the cards (the latter bought $1.5 billion worth of Bitcoin late last year). And as with Gamestop and Robinhood, if it looks like the big players are going to lose out, they simply change the rules. ‘Free markets’ are pure fiction.

Big business has tried to sell us the same basic idea many times before, going on about how new technologies will ‘liberate’ us. But Uber created a race to the bottom for taxi drivers, Airbnb laid waste to housing stock and Wework was a gigantic con. The potential of these new technologies is held in check by the fact that they’re used to grab profits instead of to improve life.

On top of all that, Bitcoin is incredibly destructive to the environment. There is a vast warehouse in Sweden where 45,000 powerful computers work around the clock – not solving medical or engineering problems, not overseeing public services or processing environmental data, but ‘mining’ Bitcoins. Before the bubble, Bitcoin consumed as much energy per year as Ireland. Now it consumes more energy than Argentina, a nation of 45 million people. This is because Bitcoin transactions cost 5,000 times more energy than normal credit card payments. The environment is paying a colossal price so that a few people can chase fake money.

In spite of the bubble, Bitcoin is still a very long way from becoming an actual everyday currency; most people are not excited about the idea of expensive and wasteful software pushing money back and forth around the internet. But in the most recent bubble, wider layers of people are buying in. Nouriel Roubini, one of the few economists known for his accurate predictions, calls these units of cyber-currency ‘shitcoins’ and warns that ordinary workers and middle-income people who buy-in are just being conned.

Bitcoin illustrates the dystopian conditions that capitalism has created. 13% of the world’s population has no access to electricity at all, while this trivial hobby is allowed to consume a volume of energy that, according to one study, could power all the kettles in the UK for 27 years. Billions of people are crying out for Covid vaccines, climate change is looming and massive levels of poverty and misery exist. But these life-or-death needs are not being met. Investors are chasing short-term profit instead of human need. This is not a fair or efficient system, it is deeply parasitic and unproductive. This system must go and we must get rid of it.

The financial institutions and major companies, i.e. the major monopolies that dominate the world economy must be taken out of private ownership of the billionaire capitalist elites. We must take them into democratic public ownership and democratically and rationally plan the economy, while safeguarding our ecosystem. On this basis, we invest society’s resources to where it will actually produce new wealth for humanity instead of wasting it on virtual tulips.