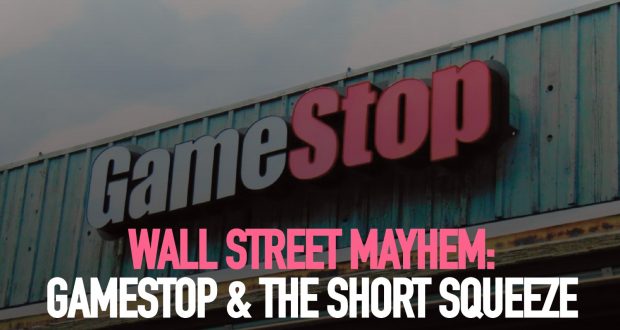 By Bryce Callaway, Socialist Alternative (our sister organisation in the US)

The ruling class and its corporate media have always tried to convince working people that if the stock market is doing well, so are you. The year 2020 starkly revealed, amongst many other issues about our society under capitalism, that this was a complete lie. While working people lost their lives, jobs, and healthcare, the U.S. stock market soared, increasing the wealth of the country’s billionaires by over $1 trillion additional dollars. Coming off the cataclysmic global effects of Wall Street’s greed in the Great Recession of 2007-2009, it has never been clearer that financial markets are simply a casino for the rich and provide nothing useful to broader society.

But over the past week, a viral campaign surrounding the video game retailer GameStop has appeared to come out of nowhere to throw classic Wall Street power dynamics into chaos. The lead story on Bloomberg.com reads “Hedge Fund Legends Lose Billions to Reddit Traders Running Amok.” Could Average Joes on social media sites really have united in an unprecedented act of internet solidarity to take down big Wall Street investors?

The classic way of understanding the stock market is that one can purchase shares of a company in the hopes that their value will rise as the performance of that company rises, or going “long.” But another less intuitive way to take a position on the outlook of a company’s stock is to sell it “short” in the hopes that the price falls. When the price goes down, the shorts make money; when it goes up, they lose money.

Short selling is a popular strategy for hedge funds, which are Wall Street partnerships that use complex trading methods to generate returns for their wealthy client base. Some of these short sellers caught the attention of the subreddit WallStreetBets, made up of individual investors that discuss high risk trading strategies amongst themselves. The subreddit collectively bet against hedge funds by buying up a large number of shares in companies being sold short like GameStop and the movie theater chain AMC.

Over the past two weeks, this sparked a viral campaign amongst individual traders using the stock trading app Robinhood and other online brokerages. The traders investing in these companies at the same time created a small but still influential market interest that increased the prices of these stocks, forcing the hedge funds to close their positions in a panic. This created a “short squeeze,” a classic trading situation that causes the stock price to rise very quickly. The trading activity has since taken on a life of its own far beyond the reddit group that initiated it.

Billionaire investors have since entered the fray, betting on GameStop stock to climb even further. Unscrupulous wealthy investors have supported a slew of misinformation about how holding onto GameStop stock hurts hedge funds, even as share prices tanked 40% on Thursday, January 28. The rich are playing both sides, manipulating the general public’s well-deserved hatred of their own hedge funds to prop up their new long positions.

As shares of GameStop and AMC soared, some hedge funds suffered significant losses. Immediately, Wall Street and its corporate media got to work publicly decrying the actions of the Reddit investors as manipulative and antithetical to the way stock markets are “supposed” to function. Without a hint of irony, short seller Andrew Left of Citron Research remarked, “I didn’t realize it was this cult like. It’s just a get-rich-quick scheme.”

GameStop is not a company that deserves to be trading at 50 or 100 times its value from a year ago. As a brick-and-mortar operation, they’ve seen profitability erode as gaming purchases move to digital and online retailers. In an effort to keep revenue flowing, GameStop even laughably classified themselves as an essential business, forcing their employees into unsafe conditions amidst the current COVID-19 panic. AMC itself was a step away from bankruptcy before the outlandish rally in its company’s stock price.

But when has Wall Street ever cared about the “true” value of a company? Big traders have used “pump and dump” strategies for decades to inflate the value of their holdings while quietly selling them off as unwitting people buy into the hype and are left holding the worthless bag. Further, the entire business model of publicly traded companies is geared towards the shareholders, many of which are the astronomically compensated executives of the firm. In service to the all-important share price, companies will do whatever it takes to send positive signals to the market, even if it means cutting tens of thousands of jobs or moving them offshore to cheaper labor markets.

On January 28, big investors got their wish as the online brokerages restricted trading in GameStop and other highly traded securities. Users were allowed to sell their positions but they could not buy any additional shares while large institutional investors like hedge funds were still able to conduct business as usual. The backlash was immediate amongst small investors and even unlikely Congressional allies AOC and Ted Cruz protested the restricted trading. The brokers used technical excuses as to why they removed the specific securities from their platforms, but it’s hard not to see this as yet another example of the deck being stacked against regular people in favor of Wall Street. Justifiably angry users flooded the Robinhood app with 1-star reviews which Google promptly removed in a show of ruling class solidarity.

The Big Short was a popular movie because it showed Wall Street’s arrogance come crashing down on them. Unfortunately, the outcome of the situation in 2008 that the film was based on was that workers were forced to bail out the big banks with taxpayer money while millions of people were abandoned to lose their jobs and homes. Worse, the Obama administration never held anyone on Wall Street accountable and investors were able to quickly recoup their losses in the coming years, with some firms using the financial crisis as a way to buy depressed assets at fire sale prices. Workers never actually recovered and are stuck in more precarious jobs than ever before, exacerbated by the COVID-19 pandemic.

It is absolutely understandable why regular people want to band together to make some money for themselves and take down the behemoth investors that have caused so much pain while profiting so handsomely. Some users of the subreddit have even said they will use their profits from the trading to pay off their student loans. As the credibility of our political and economic institutions continue to crumble, working people have correctly realized they will receive no justice when matched up against the establishment and big business.

Hedge funds are not the only bad actors under capitalism. All capitalists, including the owners of GameStop itself, accumulate their wealth by paying workers far less than what the workers earn for the company. Part of the profit that is extracted is divided up in the stock market. Financial firms that go long are benefitting from the exploitation of workers just as much as hedge funds that sell short. Attacking hedge funds by enriching another corporation, as the GameStop trade suggests, is actually a net-zero game for the capitalist class.

Moreover, the stock market is incredibly complex and rigged against working people. Big finance firms benefit from arcane rules and operate wastefully expensive ultra-high-speed internet connections that give them trading information long before it reaches ordinary people. The Robinhood app, for example, communicates its customers’ trades to major finance firms before the trades are executed. It is very hard to take Wall Street by surprise, and the impact of small investors on hedge funds has been greatly exaggerated to prolong the GameStop rally.

How to fight Wall Street

Can working people broadly emulate the strategy used by the Redditors to take down Wall Street for good? Unfortunately, the reality is most people don’t have any extra cash laying around to plug into the stock market given the heavy burdens of rent, food, healthcare and myriad other inflated costs of living. Small investors run the risk of buying into the bubble and losing money they can’t afford to in the first place.

Wall Street also has the ability to call on emergency funding in the blink of an eye. One of the afflicted short sellers, Melvin Capital, received a $2.75 billion infusion to stabilize its hedge fund once its troubles arose. Big investors additionally have institutional backing, as the Federal Reserve took immediate and unprecedented measures to ensure financial markets stayed whole during the global pandemic. Meanwhile, people actively struggling to survive may still be months away from another stimulus check that can barely cover the cost of one month’s rent.

Working people’s real leverage to bring the ruling class to its knees exists in their power to withhold the labor that creates all the profits in our economy. We must urgently rebuild a fighting labor movement and lay the basis for the creation of a new worker’s party, independent of the rotten, corporate Democrats. If Joe Biden’s recent presidential campaign had over 60 billionaires backing it, how can we expect him to stand for working people against Wall Street interests?

Bernie Sanders’ two campaign runs for President showed that millions were galvanized by the idea of a class war with Wall Street and the billionaire class. Demands to tax the rich and Medicare For All are broadly popular and can provide a platform for a worker’s party to organize around. We cannot rely on performative calls for the capitalist class to do the right thing, only a mass movement of working people can provide the force strong enough to win meaningful concessions from big business.

Karl Marx would certainly enjoy the schadenfreude from seeing a few big investors suffer at the hands of the little guy. But his vision pointed toward a permanent break from the system of capitalism that allows these parasites to thrive in the first place. A worker’s party should take up the call for a socialist future, where society’s productive forces are collectively owned and their use and function democratically decided upon. The days of the 1% rule over the 99% can then finally be consigned to the dustbin of history. 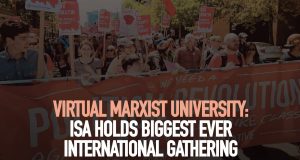 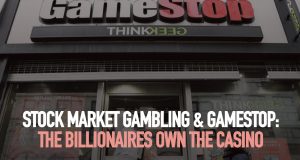