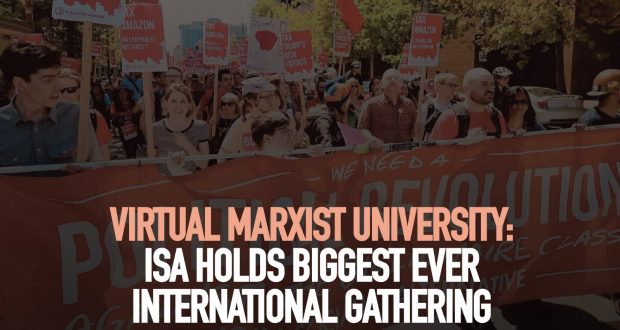 Over 1,500 ISA members and supporters from 39 countries attended the second ever Virtual Marxist University (VMU) last weekend. The event focused on political education, with dozens of discussions on Marxist theory, and revolutionary history. It was also full of discussion on perspectives for the processes and struggles taking place around the world today, as well as on the building of ISA. Notably, this was the second gathering bringing together over 1,000 ISA members in just six months, following the success of the first, July edition of the VMU. Even larger than the July event, this was a reflection not only of organizational growth, but also of the hunger for political discussion and education throughout ISA.

Although it was only a weekend event, it was packed with 72 different commissions as well as two plenary discussions — 24 hours of political discussions in just two and a half days! Of course this was no simple undertaking; with sections across every continent, this involved many members staying up late into the night or even getting up at 3 a.m. to participate. Despite having a record-breaking financial appeal only a few months ago, over €32,000 was raised in donations at this VMU, just one indication of the level of seriousness and commitment of ISA members.

The importance of political events like this cannot be understated in the context of the explosive and unpredictable political situation facing the global working class right now. The capitalist system is entrenched in a series of crises. From the COVID-19 pandemic, which triggered and in turn deepened the economic depression, to the looming threat of climate catastrophe, there is no way out for workers on the basis of capitalism. The pace of events has accelerated, with new crises, movements and revolts developing across the world almost daily.

Just in the past few weeks mass protests for abortion rights have re-ignited in Poland and farmers in India continued their movement with a massive tractor parade, dovetailing with massive strikes by the Indian working class. But the threat of reaction is also very real, as we saw with the storming of the US capitol by a mob of far-right Trump supporters, the brutal crackdown on democratic rights in Hong Kong, and the recent military coup in Myanmar. There is huge openness to socialist ideas in society, especially among young people, but in the context of deepening polarisation. The development of working class consciousness is complicated and will not move in a straight line as also shown for example by recent events in the Netherlands, where anti lockdown riots have made headlines around the world.

We are moving into a new era, which presents both tremendous opportunities and serious challenges to the Marxist movement. ISA is not just a discussion group; we are an organization of socialists fighting in our communities, workplaces, schools, and within mass movements to transform society.

While preparing for the VMU our members were also participating and intervening in the mass protests in Russia and Tunisia, defending our Marxist city council seat in Seattle from the right wing recall campaign, and fighting through the trade unions for safe schools in Britain. However, it is crucial that all of our work is grounded in revolutionary theory, lessons from history, and shared perspectives for the coming situation. ISA members who attended the VMU left with a deeper understanding of the tasks in front of us and a renewed sense of resolve to both face the challenges and seize the opportunities to come.

The plenary discussion on Saturday, titled ‘Crisis and Mass Struggles Kicking of the 2020s’, emphasized the volatility and polarization of the coming era along with the challenges posed due to the lack of organization and leadership within movements today. We heard lessons from the movements in Latin America, Belarus, and Poland, perspectives for the world economy, and a report on the repressive crackdown on the movement in Hong Kong.

Commissions took place in 6 blocs of between 8 and 16 simultaneous discussions. There were important discussions on Marxist theory, with 135 members attending a discussion on Marx’s theory of alienation. Multiple commissions focused on the economy including discussions on ‘Marxist economics vs. Modern Monetary Theory’ and the ‘Great Recession’ of 2007/2008. We also looked back at key historical events including the so-called Arab Spring, the Paris Commune, and the revolutionary struggle against apartheid in South Africa.

Discussions analyzed important developments of the past year including the Anti SARS movement in Nigeria, and looked to the future with a discussion on International Women’s Day 2021. Popular contemporary topics included discussions on Marxism and the mental health crisis and a socialist approach towards Universal Basic Income (UBI).

On Sunday there was an inspiring party building plenary with contributions on the growth and building of our sections in Mexico and England, Scotland and Wales, as well as the importance of our work in the trade unions around the world. We heard an exciting report on our publications including our weekly youtube broadcast World to Win, and important updates on the Kshama Solidarity Campaign.

There were also a series of party building workshops including discussions on layout and design and building ROSA — the international socialist feminist campaign. The most popular discussion was about how to politically develop yourself, showing the serious approach of ISA members towards their own development, something that was on display throughout the whole VMU.

One key theme of the weekend was the important role of young people in revolutionary struggle and the need to turn our organization towards the youth. This included discussion on the rich legacy of youth work in our organization, reports from our work in Youth Against Inequality and Racism (YARI) in Ireland, as well as a commitment to deepening our youth work in the coming period. Young people today, a generation steeped in crisis, are rejecting the status quo, but it will take active work to win this new generation of workers over to the ideas of Marxism.

In the context of global upheaval, an internationalist approach is absolutely critical. The weekend’s discussion had an important emphasis on continuing to strengthen new sections and branches of ISA as well as building in new areas. New ISA members attended from India and Argentina. Just a year after the re-naming of our organization, this VMU represents a substantial step forward in the building of ISA around the world.

Probably most striking about the whole event was the degree of collective effort and participation. Over 200 different members introduced or concluded discussions, chaired meetings, or handled tech support, and hundreds of others spoke in discussions! And of course the event would not have been possible without the heroic work of the many ISA members who provided interpretation into 11 languages throughout the weekend, an absolute necessity for a truly international event.

These numbers are not just a display of numerical strength, but show the real depth of ISA around the world, with members taking an active role in building the organization on all levels. Rebuilding the collective leadership of our international, a task which was emphasised when ISA (formerly the Committee for a Workers’ International) was renamed last year, is not an abstract platitude. But rather, it is a concrete necessity of building a revolutionary international able to effectively intervene in the titanic struggles to come. The success of the January Virtual Marxist University was possible because of the development of new generations of leaders in our organization, which will continue to be a priority in the coming years.

While we look forward to being able to have in-person events again in the future, the VMU represents our determination to smash obstacles and the forging of new traditions within the ISA. We look towards the 2020s both with a sense of humility but also determination and audacity, prepared to have the maximum possible impact on the explosive developments ahead. We base ourselves on the ideas of Marxism, the best traditions of our past, and the boldness of new generations of socialist fighters. This Virtual Marxist University instilled in all of us a sense of optimism but also urgency as we move into 2021. Contact us today to get involved!