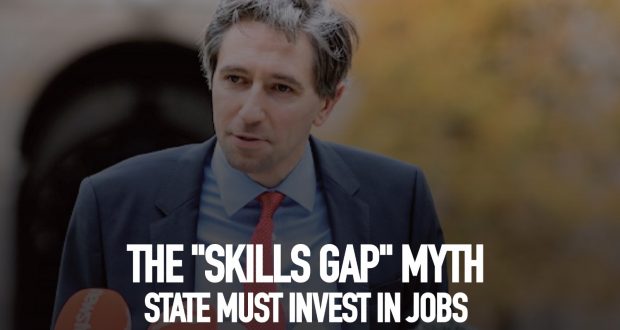 The “skills gap” myth- State must invest in jobs

Simon Harris, the Minister for Further and Higher Education, Research, Innovation and Science, last week announced what was billed as a lifeline for anxious hospitality workers impacted by the destruction caused by his government: skills! In what was hardly an innovative move, Harris announced to the newly unemployed the opportunity to “re-skill” and “upskill” by providing free courses through SOLAS and Education and Training boards.

The primary skills that workers have the opportunity to learn in order to dig themselves out of the hospitality hole are finance, people management, customer care, digital skills, communications and strategic planning. A quick glance at any job listing website will show that these are some of the most needed jobs by employers currently advertised. These positions existed before the pandemic, finance and IT in particular have been chronically understaffed in recent years, but there are nowhere near enough positions to accommodate the vast amount of newly unemployed. Yet Simon Harris and his coalition cronies tell desperate workers, “learn to code” – a common response to workers who have seen their livelihoods disappear. This condescending mentality is built on several false premises.

The first glaring issue with this paltry proposal is the reliance on the idea of the “skills gap”. The “skills gap” narrative has been propagated by private industry and their sycophantic stenographers in the capitalist press purporting to show that a lack of skills was the cause of the growing unemployment rate starting after the Great Recession. Since 2008, there have been innumerable articles, both “sponsored” content by large corporations (the pernicious disguising of an ad as journalism) and gratis by faithful business columnists in the mainstream media, about the “skills gap” which had to be closed to solve the crisis of mass unemployment.

However, a study of 32.6 million job postings by Burning Glass Technologies, showed that as unemployment heightened between 2007 and 2014, job criteria became more stringent, dispelling the myth that a lack of skills was the cause of growing unemployment since the Great Recession. On the contrary, it was the employers themselves who contributed to growing levels of joblessness. Anyone who has sought employment since the 2008 recession will have noticed how employers have upped the education and experience requirements, which shows that the “skills gap” was merely a bosses’ ruse to siphon more money from taxpayers to fund these courses, instead of providing in-work training as in previous decades – saving them enormous sums of money.

Another of the many faults with this insulting announcement is that an enormous proportion of former hospitality workers either had higher level degrees or were still in college. The former group were largely underemployed and struggling to compete in an already ludicrously competitive labour market, and the latter group were similarly struggling to make ends meet while juggling exorbitant college fees, soaring rents, sky-high living expenses and full-time course hours.

Many workers in positions that require higher level degrees are already expected to “upskill” while working full time, with the added burdens of longer working hours and prolonged wage stagnation in comparison with previous decades. Again showing that the “pull yourself up by your bootstraps” neoliberal mentality continues to infiltrate further into society from big business to government policy.

For policies for workers not bosses

The breath-taking arrogance of the government in providing a “solution” to a problem that they are largely responsible for is hardly surprising given the utter contempt shown towards the Debenham’s workers who were offered a €3 million fund to pay for similar schemes. As the hospitality and retail sectors continue to be decimated by the gross negligence of the government, some estimates putting the job losses around 160,000, we can only expect more of these profoundly unhelpful proposals in the coming months and years.

What is needed is real training, education and skills to be provided by the state where it is necessary and wanted. All courses in universities and third level institutions must be made freely accessible to all and apprenticeships and training should be provided. The state has a responsibility to maintain and create employment, job shedding companies should be brought into democratic public ownership and the obscene wealth of the billionaires should be public invested to create jobs such as extra teachers and nurses.

The working class under this right-wing coalition can expect nothing other than the boardroom-devised policies of the rapacious employer class, who in their unquenchable thirst for increased profits will only further erode the already precarious position of workers. The ruling elite has demonstrated over and over their willingness to exploit and exacerbate a crisis to strengthen their domination from the top down, which will only get worse as the crisis further unfolds. Studies have shown that restaurant workers are among the highest in fatalities due to Covid – further exposing the urgency to demand real changes to protect and improve their lives.

When hospitality workers ask for better working conditions the common refrain from management is, “well none of us are going to be here forever”– implying that these jobs are transient and therefore shouldn’t be made tolerable in the here and now. This sleight of hand ignores the fact that many hospitality staff do in fact stay for years as the prospect of upward mobility for the working class, particularly women and immigrants.

Rather than accepting the “lump it or leave it” dichotomy, workers should demand an end to zero-hour contracts which pits workers against each other making solidarity impossible and allowing abusive bosses to bully, sexually harass and intimidate their staff. We need full-time contracts for all hospitality staff, a living wage and democratic public ownership of the few entertainment/ hotel groups who dominate the hospitality industry.

The enormous courage and determination of the Debenhams workers must be a model for all struggles against malicious and indifferent employers going forward in 2021. We must unite all workers together to challenge the authority of the vampiric capitalists, combined with a revolutionary socialist vision for real change and freedom from the current cruel exploitation by indifferent and self-serving bosses, and their allies in government.