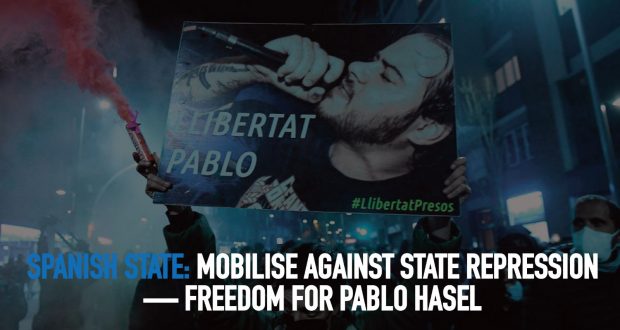 By Rob McDonald — Socialisme Revolucionari (our sister organisation in Catalonia)

As the crises of capitalism deepen, so does state repression. The jailing of Pablo Hasel is the latest attack from a vicious Spanish state against fundamental freedoms that it is supposed to protect. We must meet this by mobilizing, and organizing, but also understanding that we must struggle for the end of the capitalist system as the only way of ensuring artistic, economic and social freedom.

We must stand with Pablo

Pablo’s fight goes back to 2011, since when he has been consistently harassed and arrested for his views. This latest attack, resulting in his imprisonment, follows his arrest in 2018, together with another rapper Valtonyc, of sharing lyrics and social media comments against the monarchy and talking about terrorism. Pablo is a defiant rapper, who continues to speak his mind and refuses to be silenced.

This repression of free speech has a long list of victims in the Spanish state: from the lyrics of Valtonyc, Pablo Hasél and César Strawberry to Cassandra’s tuits, puppeteers and most recently the dismissal from the public broadcaster TVE of the scriptwriter Bernat Berrachina for a humorous sign against the monarchy.

But the repression goes further than this, being directed against working class struggle. During the economic crisis that started in 2008–9, prosecutors suddenly asked for up to 8 years of prison for those who took part in picket lines. Then in October 2017, the whole world saw the brutal attack on peaceful voting in Catalonia and the repression against the independence struggle in general.

The “Ley Mordaza” — the “Gag Law” — approved in 2015 has served to prosecute journalists for informing about police repression, and to repress the right to protest and demonstrate. It was used to prosecute feminist activists for participating in picket lines during the Feminist Strikes in 2018–2019.

All these attacks, often over relatively minor incidents, show the readiness of the capitalist state to curtail any political struggle that is seen as a threat to the social order it defends. The authorities want to make us live in fear and re-establish Francoist methods of control, to which the post-1975 regime still pays tribute. If we do not resist this with all our energy they will respond with more and more repression until we are silenced.

It is absolutely hypocritical that they try to silence voices against the monarchy while not lifting a finger against the deep-seated corruption of this feudal vestige, or against the representatives of the regime, who are guilty of brutal human right violations. Critical artists are sent to prison for their lyrics while the corrupt former king is living in luxurious exile. This hypocrisy is also manifest in the EU’s silence over such blatant attacks on free speech, the same EU that is quick to admonish member states for failing to comply with its neoliberal regulations.

Freedom of the arts and the struggle to change society

Capitalist culture is saturated with sexism, the glorification of money and the cult of individualism. Everyday advertising uses creative methods to increase profits, with no regard to the needs of people or the environment. The culture of capitalism is basically a vehicle to increase the profits of the super-rich.

We need to protest and argue against this negative cultural mainstream, we need to also focus on building an alternative culture. We need to strengthen working class culture that speaks of unity, collective struggle and diversity.

We should not rely on the capitalist state to choose what is good and bad, beautiful and ugly. At the end of the day, this state exists to defend the social and economic system that is the root cause of the issues and problems we face.

Art and culture are being destroyed by the economic crisis that has accompanied the Covid pandemic. Even before this crisis, artists knew very well the precarious nature of working in this sector, with no contracts, opportunities or spaces to work. We are often expected to work for free just because our work flows from our passion. This exploitation was already extreme, but after this latest economic crisis we are fighting for the very right to create. The struggle for arts and culture is the struggle to be a human being, free of the restraints of the profit system.

Not only do we have to defend the freedom of speech, but we must go further and defend the right to be creative, to have meaningful work and conditions that give every person dignity to lead a fruitful life. To achieve this, we need the full and democratic redistribution of the wealth in society. We must put clearly on our agenda the fight for a socialist society.

Need for a revolutionary song

In the protest in Lleida on 10 February, Pablo Hasel correctly raised the complacency of the PSOE/Unidas Podemos government regarding this latest attack and the need for a popular movement to change society. The so-called left government has limited itself to some vague promises about reforming the legislation that currently punishes artists for their lyrics. While we should not be surprised at PSOE’s passivity over this issue, as its leaders long ago sided with the status quo, it does raise the question of how we need to organise to change society.

As Pablo put it:

“They’re carrying out repression. And repression isn’t an individual question, it’s collective. If they go after one like me it’s to scare the rest. We’ve got to get the message across, on the internet but on the streets too, raise awareness to develop a movement leading to mass rejection, revolutionary action. We need to organise solidarity to develop freedom of expression. All previous conquests were won by revolutionary action… we don’t just need a solidarity organization, but an organisation that undertakes, unites struggles for all the rights and freedoms we don’t have, which goes together with tackling the root of the problem…

With organisation and struggles on the streets we can achieve improvements, lots, but not a solution. We can’t reform this State. We need profound changes, by annihilating this State and conquering a people’s republic in which the working class has power and can guarantee those rights and freedoms they deny us with violence, and we can achieve what all of us want, which is to win decent lives…”

How you can stand in solidarity with Pablo:

Representatives of the world of art and culture in Spain, have joined together to show their support for Pablo, to demand his freedom, and to demand the expulsion from the Penal Code of this type of crime, which does nothing more than curtail the right not only to freedom of expression but also to ideological and artistic freedom.

Their letter can be found at https://t.co/sIJCLczUVR

If you want to sign this letter email Llibertatpablohasel@gmail.com 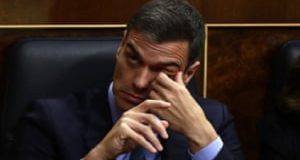