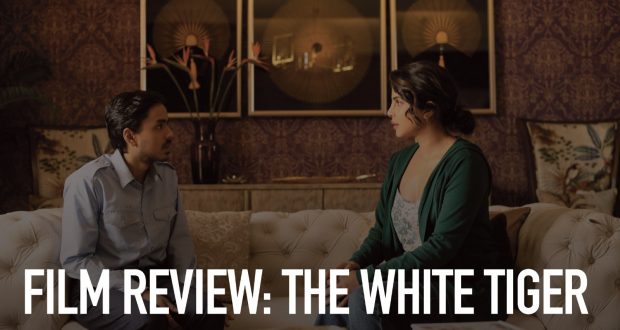 “In the jungle, which is the rarest of animals that comes along only once in a generation?”

“That is what you are. The white tiger.”

A dark drama based on Aravind Adiga’s novel, its stunning direction helps deliver us into the physical and psychological world of Balram Halwai (Adarsh Gourav). What on the surface could be a classic “rags to riches” story soon becomes a dark satire into Indian capitalism, and its class and caste divisions, as Balram who we start off rooting for has to turn to lying and violence to advance in the world. Many of the characters are satirical over-exaggerations in such a way that they themselves become symbols for the injustices of the system.

This movie depicts the widespread poverty in India and the extreme gap between this and the very wealthy elite. It’s satire takes a dig at Indian democracy, with its political corruption and inequality as the wealthy business-men characters routinely bribe corrupt officials.

The story follows Balram Halwai (perfectly cast with Adarsh Gourav who offers excellent narration alongside his acting), as he attempts to escape the life of poverty he led as a low caste member of a rural village.

Deeply instilled into Balram’s character is the concept of servitude, wondering what could happen if the roosters escaped the cage. He calls himself and others in the lower castes as “The Men with Small Bellies” and deems the landlords and business people as “The Men with Big Bellies”.

The characters of the elite class are riddled with hypocrisy. Whether crude defenders of the caste system, or whether they deem themselves to be liberal and modern, they never do the right thing and show themselves to be morally reprehensible.

Though set in India during the 2010 internet boom, its plot is extremely relatable to today, with all of the contradictions in the film intensified under Modi’s dangerous rule.

The White Tiger teaches us many valuable lessons. What comes out most sharply is the nightmare of capitalism for the vast majority of humanity and the impossible fantasy of some ‘rags to riches’ meritocracy.

The White Tiger is available on Netflix now. A must watch movie.