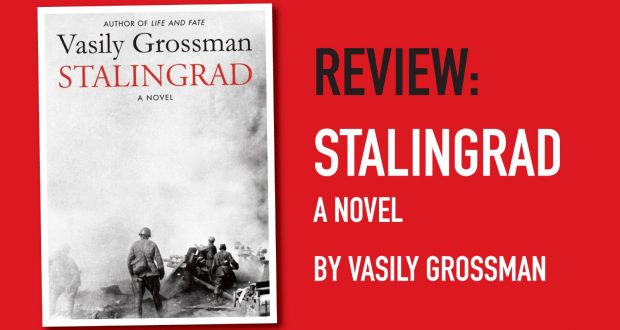 Vasily Grossman’s Stalingrad was originally published in the Soviet Union in 1952 under the title For a Just Cause, an epic novel about the pivotal battle of the Second World War. The narrative ends a few weeks into the battle with the fates of the main characters still up in the air, and millions of Soviet citizens must have eagerly awaited the sequel. But they were disappointed. Grossman finished the sequel Life and Fate in the 1960s, but the state suppressed the novel because it told the truth about the horrors of Stalinism (See our review in Issue 8 of Socialist Alternative).

The fate of Stalingrad

Copies of Life and Fate were smuggled out on microfilm and published in the west years later. The novel was hailed as a masterpiece. But Stalingrad was forgotten; western critics considered it a work of dull propaganda (despite most of them never having read it!), and decades passed without it appearing in English, even though Life and Fate is often very difficult to follow since it begins half-way into the story. It seems that Stalingrad was ignored by publishers in the west and Life and Fate was suppressed by publishers in the east for essentially the same reason: because the powers-that-be did not approve of the politics of the novel.

At long last Stalingrad was published in 2019 to extraordinary acclaim. According to the Daily Telegraph, ‘you love his characters and want to stay with them… you need them in your life as much as you need your own family and loved ones’! The gushing tone of the reviews is liable to give you whiplash when you remember that it took the literary establishment seventy years to notice this book. But the hype is justified. Stalingrad is definitely as good as its sequel. Editor and translator Richard Chandler did a brilliant job and, to his credit, admits that his previous dismissal of Stalingrad was mistaken.

In the first half of the story the Nazi armies are closing in on the city of Stalingrad. Grossman conveys the collective endeavour embodied in the city, whose population had grown tenfold in twenty years. Vast factories and modern white apartment blocks had been built at tremendous effort on an inhospitable river-bank. He introduces us to a large cast of characters and to their experiences of the war so far. At the mid-point of the novel we see the city ruined in a terrible bombing raid. For weeks after, the walls still radiate heat from the fires. The soldier Vavilov, newly arrived to join the desperate street-fighting in the ruins, ‘felt the warmth still breathing deep in the stone. To him it seemed to be the living breath of those who until recently had still lived in these buildings.’

As in Life and Fate, real-life figures wander in and out of the narrative, giving us an insight into why all this mass murder and destruction are taking place. At one point a German officer delivers a report from the frontlines to Hitler himself. But the Nazi leader doesn’t actually listen to the details about supplies, troop movements, reinforcements and enemy reserves. With horror, the officer realises that Hitler’s order ‘Stalingrad must fall’ is not based on any galaxy-brained understanding of the strategic situation, but solely on Hitler’s own solipsistic delusions about the power of his will. The suffering and destruction seems even worse in the light of the arrogance and unhinged fantasies of the fascists.

A society at war

This is a book about war, but combat and violence are rarely at the forefront. It’s about women as much as it is about men, about refugees as well as soldiers, about theoretical physics as well as grand strategy. The narrative challenges the reactionary idea that civilians depend on the military; it shows us how, on the contrary, any modern war effort would be impossible without mines, fields and factories, canteens, clinics and orphanages. Miners and childcare workers are portrayed as being every bit as heroic as soldiers. Commissar Krymov spends several chapters on a mission, not to storm a trench or to defend a hill, but to obtain fuel for his unit’s vehicles.

There are awe-inspiring descriptions of combat, but they are doubly powerful because they are grounded in this portrait of an entire society. The story makes us appreciate the humanity and social life of every individual soldier and the labour embodied in every tank and shell, every brick and sheet of corrugated tin lying in the ruins.

Comparisons with Life and Fate

When Stalingrad was published, Stalin was still alive and his terror campaigns still raging. Its contents reflect the fear of censorship or even arrest. Life and Fate was written later, when Grossman (incorrectly) believed that space for free speech had opened up after Stalin’s death. Thus the politics of the sequel are far harder-hitting.

The forced collectivization of agriculture is remembered in Life and Fate as a catastrophe but in Stalingrad, the only characters who criticize it are reactionary moonshine dealers. State terror only hovers on the edges of Stalingrad. The sequel goes out of its way to portray the Kalmyk people positively, apparently to make up for a bigoted remark which appears in the first book. A small point says a lot: Trotsky, the murdered opponent of Stalin and his rotten bureaucratic regime, is referred to again and again in Life and Fate, but never mentioned in Stalingrad.

It would be a fair criticism to point out that the characters are mostly Soviet professionals, managers and military officers, with only a minority of workers, collective farmers and rank-and-file soldiers. This is true also of Life and Fate.

Stalingrad presents one glowing portrait after another of real-life Red Army generals, which readers may roll their eyes at. But the top brass are still portrayed as human, with their weak spots and petty quarrels. Our culture today is saturated with far less subtle celebrations of the US military, CIA, police etc. Overall, while you can point out this or that omission or imbalance, no part of the novel seems fake or manipulative. In spite of being written in the shadow of state terror, it is in fact more critical and nuanced than many British or American stories about the war, which ignore events such as the starvation in Bengal, the internment of Japanese-Americans and the annihilation of hundreds of thousands of civilians through bombing. The failure to publish Stalingrad for so many years and its dismissal as mere propaganda were completely unjustified.

Parts of the novel are really funny. Andreyev, an aging factory worker and voracious reader, wants to figure out how to get his wife and his daughter-in-law to stop arguing all the time. So he goes to the library and borrows a book that he thinks might help him to understand them: Women and Socialism by August Bebel. ‘But,’ the narrator tells us deadpan, ‘the book turned out to be about something else altogether.’

Bebel is not the only representative of the German socialist tradition to feature in the book; there are significant references to Karl Liebknecht. Characters debate whether or not the German working class has been completely cowed by fascism. The depiction of the German characters is sensitive and politically sharp. Even the fanatics and sadists have a disconcerting human side. In the same unit, keeping his head down, is a veteran of the mutinies of 1918, a shop steward whose friends are all in concentration camps.

Defence of the Soviet Union

Because of the strength of Grossman’s critique of Stalinism, many readers in the west assume that he was pro-capitalist and pro-imperialist, like Alexander Solzhenitsyn. But Stalingrad leaves no room for doubt. Only a genuine socialist could have written this book. The same basic attitude was always discernible in Life and Fate, but now it should be even more difficult to ignore. In these two novels Grossman combines support for the Soviet social and economic system with a piercing critique of the political regime. The picture in Stalingrad is incomplete without the bold criticism in Life and Fate, but Life and Fate is equally incomplete without the fierce pride conveyed in Stalingrad.

Krymov, leading a force of Red Army soldiers who are trapped behind enemy lines, thinks about the source of their courage and strength:

Before the war they had worked in Soviet factories and kholkozes [collective farms]; they had read Soviet books and spent their holidays in Soviet houses of recreation. They had never seen a private landowner or factory-owner; they could not even conceive of buying bread in a private bakery, being treated in a private hospital, or working on some landowner’s estate or in factories that belonged to some businessman. Krymov could see that the pre-revolutionary order was simply incomprehensible to these young men. And now they found themselves on land occupied by German invaders, and these invaders were preparing to bring back those strange ways, to reintroduce the old order on Soviet soil.

They fight to defend the social and economic order established by the Revolution. What makes this defence possible is the publically-owned and planned economy. Later the narrator tells us of

remarkable feats in the darkness of the Siberian nights, in blizzards and deep snow. During this year, in these hundreds of new factories, workers and engineers multiplied the military might of the Soviet state. At the same time, the energy of millions of people […] was redirected to the defence industry […] If this vast amount of work has, to many, seemed insignificant, it is because it is the vastest things that most often escape our notice. The people’s rage, the people’s pain and suffering, was transformed into steel.

This is all summed up at a crucial point in the story, when a character is about to relay news from Stalingrad to a crowd of miners. He suddenly forgets his speech and finds himself instead telling a story from his childhood in pre-revolutionary times: ‘The mine owner had fired my father and locked us out of our room. He’d thrown all our belongings out onto the street… It was autumn, just like now. Guards came, and police…’ The miners listening to him understand. To them, the connection between that memory and the current battle is obvious: both represent the struggle of working people against cruel oppression and for a better future.