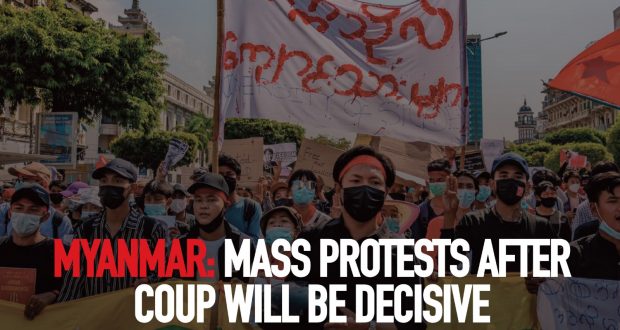 Support is growing for the ‘Civil Disobedience Campaign’ first launched by medical workers from over 80 hospitals in Myanmar. They have now been joined by civil servants from the Ministry of Energy and members of the police force are joining the struggle against the coup, openly demonstrating the three-finger salute — symbol of the protest.

he people of Myanmar are taking to the streets in massive protests against the military coup in the country. Despite Covid-19 and repression by the authorities, this movement is growing significantly. If the military thought they would just get away with their coup, they were mistaken. The protest movements could be decisive.

Myanmar’s military (the Tatmadaw) staged a coup on February 1st, the day before the new parliament took office. A state of emergency was declared, the results of the November 2020 parliamentary elections were declared invalid, and leaders of Aung San Suu Kyi’s National League for Democracy (NLD) were arrested.

This coup comes at an important juncture for the Myanmar establishment. The military leadership has been forced to allow elements of democratisation in recent years, partly because the move opened many doors internationally and partly because a wave of protests in 2007 threatened internal stability. International government leaders lined up to visit Aung San Suu Kyi after her release in 2010. Just days before the coup, the IMF gave the country 350 million dollars to fight the Covid-19 pandemic.

Those who took part in earlier protests pinned their hopes on change when the NLD entered government. However, this led to growing disillusionment. During previous years the NLD opted for loyal cooperation with the army leadership. The loyalty was not mutual: even after Aung San Suu Kyi went to The Hague to defend the persecution of the Rohingya minority, the army command remained suspicious.

It was no coincidence that the February 1st coup occurred just before the new parliament was due to start. In November 2020, Aung San Suu Kyi’s NLD won a large majority of seats, even if the army automatically awarded itself a quarter of the seats. This would give the NLD a greater grip on power. Moreover, the retirement of Min Aung Hlaing, the key strong man in the army leadership who turns 65 in July, is imminent.

Perhaps the army leadership thought it would get away with the coup, given the health crisis at home, and the rising tensions between China and the US. The very cautious reactions of international bodies showed that international disapproval should not be counted on. For the Chinese regime, a military coup is of course no problem, as long as the regime remains stable. The US and other international powers are cautious in their reaction to the coup; they do not want to give the Chinese regime too much space in a country with important natural resources. The Japanese Foreign Ministry has even declared openly that communications should be maintained with the military for fear that otherwise China would strengthen its position.

The biggest problem for the military leadership and the international powers, especially China, has been and continues to be mass protest. This was taken into account: leaders of both the monks’ protest in 2007 and the uprising in 1988 were immediately arrested on February 1st. But perhaps the army command thought that it would not come to a mass movement. That the health crisis is not an absolute brake on movements has already been demonstrated in neighbouring Thailand, among other countries. If protests continue to develop, the coup may well have been the whip of the counter-revolution that propelled the revolution forward.

The cancellation of the 1990 election results, which the NLD won, followed the 1988 mass movement. But now the move by the army leadership has triggered a new movement. This undermines the strategy of Aung San Suu Kyi and the NLD leadership. In recent years they have followed a strategy of loyal cooperation with the army command. If the mass movement stops the army’s seizure of power, it will be difficult for Aung San Suu Kyi to continue that course.

This is because the coup demonstrates the failure of that cooperation, and further, the mass movement always tends to develop more demands as it itself gains in confidence. Stopping this developing mass movement using manoeuvres at the top will be difficult, even if the movement is not very organised and despite the undoubtedly contradictory elements within it.

Once the masses are on the move, the discussion of democratic rights soon generates social demands as well. Both, of course, go together. Marxists do not leave the discussion on democracy to the “liberal” wings of the ruling class, but take part in the struggle as the most consistent democrats, linking democratic demands with the need for revolutionary struggle for socialist change.

This is not what the NLD stands for, which is why there has been growing discontent with the policies and direction of the NLD in recent years. If the NLD won the November 2020 elections, it was mainly out of dislike for the military. The NLD offers nothing to the various ethnic groups in Myanmar in areas like the Shan or Kachin states. In Rakhine State, for example, the local ethnic Arakan National Party won more votes than the NLD, even with voter turnout restricted to just 25%.

The coup and the beginning of mass protest changed the situation. It is logical that many demonstrators first and foremost demand the release of Aung San Suu Kyi and the NLD leaders. They see in them an instrument against the army. At the same time, however, the discussion should focus on how to really stop the army leadership: Aung San Suu Kyi’s methods clearly have not worked. Her policy of cooperation was seen as a sign of weakness by the army leadership. As we know, weakness invites aggression.

To be successful, the movement must develop its own instruments both to strengthen the movement itself and to formulate and defend political and social demands arising from it with the widest possible involvement. Already, thousands of health workers and medics have organised into ‘civil disobedience’ in the form of strikes, with copper miners and even civil servants moving into strike action. To demonstrate the anger doctors at the Yangoon Hospital emergency department will continue to provide emergency care but will not treat in any way members of the public who have participated in any way in pro-military actions.

The call for a general strike after the protests of doctors, teachers and others offers opportunities to significantly bolster the movement, especially if strike committees are set up in all workplaces and neighbourhoods, with a coordination of these strike committees that can form the basis for a constituent assembly. This is urgently needed, if only to protect the protest from repression and violence by the authorities.

Support for the army leadership is extremely limited, as was already evident in the November 2020 elections, and it will not improve with this coup. A regime that is cornered can make strange leaps, something that is particularly true of a regime that has done so before. This can lead to a sharp increase in violence and repression to stop the protest in blood. Already, the regime has attacked protestors with tear gas, water cannons and rubber bullets, and there are now martial law crackdowns on internet communications and social media.

The masses of Myanmar have shown in the past that bloody defeats can be followed by new movements: the experiences of 1988 have not yet been forgotten. At the same time, political lessons must be learned: change is not achieved by governing with the military or by accepting their conditions. Democratic reforms are also insufficient to change the living standards of the majority of the population. There is a need for a programme of socialist social change and the building of a revolutionary organisation that popularises this need in organised and coordinated strikers’ committees.

There can be no faith in the institutions of global capitalism to play a truly ‘progressive’ role; the hypocrisy of developed nations, as well as blocs like ASEAN, over human rights is already clear. There is also the question of vested business interests that will serve as their primary motivation; it is only in the wake of the coup itself and the instability it will bring that major Japanese company Kirin and Singaporean businessman Lim Kaling have publicly cut their financial ties with Myanmar’s military-led joint ve