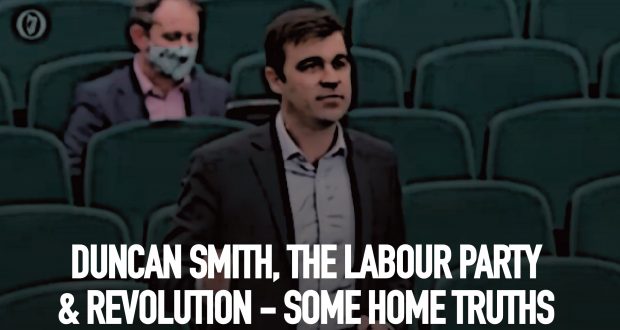 Duncan Smith, the Labour Party and revolution – some home truths

In a recent viral Dáil debate on the topic of new Covid legislation and its potential effect on workers, Labour TD Duncan Smith attacked the Healy-Rae brothers for their “common-man” pretenses and their disingenuous concern for the working class. This was an accurate assessment of the Healy Raes, and one that should be highlighted more often.

Smith also made some bizarre claims about the Labour Party’s revolutionary enthusiasm. Given Labour’s track record of consistently attacking the working class whenever the chance has arisen, any claims to be on the side of the working class now will be regarded with more than a little bit of scepticism.

Despite the Labour Party’s origins as the party of the trade union movement and workers generally, founded by two revolutionary socialists in James Connolly and Jim Larkin, it’s important to recognise that the modern Labour Party is best understood as being similar to, and indeed a poor cousin of, the Green Party. It is poorer because it currently has less popular support, but like the Greens even the mealy mouthed grand standing that they occasionally engage in is entirely meaningless because we know that they will backtrack on all their new found principles as soon as they enter government again. Ultimately both parties accept the logic of the capitalist market: a system based on the rule and the interests of a tiny super-rich elite.

As multi-millionaire business owners from a Fianna Fail dynasty, the Healy Raes are actively supporting their own class interests, while pretending to understand the “working man”. Duncan Smith and Labour, on the other hand, have actual working-class roots, even if they’ve strayed very far from them now.

For example, at the Labour Party’s 1914 congress the following motion was passed; “Congress urges that labour unrest can only be ended by the abolition of the capitalist system of wealth production with its inherent injustice and poverty”. Under the leadership of Connolly and Larkin, the root of the problem facing the working class was clearly understood.

Sadly, despite these working class and socialist roots, Labour today actually has more in common with the Healy Raes than they would admit in a Dáil debate. Here are some of Duncan Smith’s quotes from the Dáil debate, and the full video, for context:

“If [Richard Boyd Barrett] can see us, when the revolution comes, from the very back of the battalion you’ll see as usual, that we will be at the front.”

“I am not going to be lectured on understanding workers. I do not have to put on a political costume and a caricature to pretend I am working class.”

These words amount precisely to a “political costume”, one that should also be exposed for what it is in the same way the Healy Raes should be exposed. They stand in almost absurd contrast to Labour’s record in relation to the class they were founded to support. Some of Labour’s most recent attacks against the working class include:

A strategy that’s come to an end?

Putting the recent bluster in the Dáil aside, Labour’s track record in power proves its pro-capitalist, anti-worker credentials. Far from being at the front of the “battalion”, it is consistently on the wrong side of the proverbial barricades.

In the past, such as the period from the late 1960s until the late 1980s, there existed a sizable left wing inside the Labour Party, which opposed coalition with the parties of the right on principle. The existence of such a left reflected the fact that the party was still based on the working class and its organisations, with an active membership and democratic traditions. Militant, the forerunner of the Socialist Party, worked as a Marxist tendency within the Labour Party in this period and argued for a break with ‘coalitionism’ and for Labour to become a fighting, socialist opposition to capitalism and the parties of the right. Today, no such opposition to coalition, or the party’s support for neo-liberal capitalist orthodoxy exists within Labour.

Since 1948, Labour has served as a minor partner in coalition governments on seven occasions – six times with Fine Gael alone or with Fine Gael and other smaller parties, and once with Fianna Fáil. Labour’s strategy of seeking out coalition opportunities with right wing parties, and its actual political support for the capitalist system, means it must constantly capitulate in order to fulfill their careerist ambitions. As soon as they land a few ministerial positions they waste no time in serving the needs of the establishment and status quo.

When disappointed voters cast them back into the opposition benches they simply begin to work their way back up for the next coalition, to repeat the process all over again. They do this by putting on a somewhat more radical face in opposition, donning their own red political costume, and occasionally leveraging the deeds of their long dead founders.

However, so disgraced was the Labour Party after that last stint in government, and so hapless are the current batch of Labour TDs, epitomised by Alan Kelly as leader, that its ability to ever recover is in serious doubt. Not least because the more capable, but untested, Social Democrats represent a very similar type of politics.

For a real working-class party

What neither Labour nor the SD’s represent is a working-class, socialist politics. Neither offer any solution to the problems caused by a capitalist market system today — whether the housing, health, climate or general economic crisis. James Connolly, on the other hand, knew that a real party of the working class must have as it’s aim: “abolition of the capitalist system of wealth production with its inherent injustice and poverty”, as the programme of the Labour Party once included. He also made this very salient point:

And when the revolution that Duncan Smith TD awaits arrives, it will only succeed if the working class movement in this country has built such a mass socialist party, which will only come at the expense of the current sorry excuse for an Irish Labour Party.

One year of the English Language Student Union