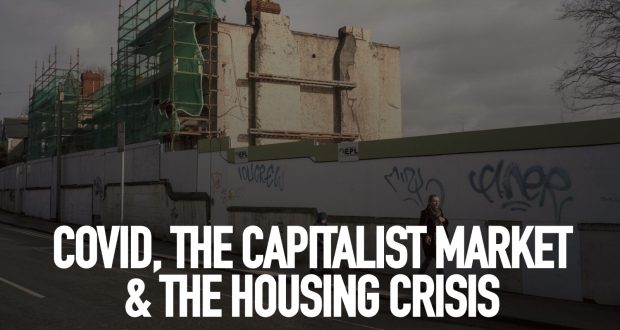 Covid, the capitalist market and the housing crisis

At the end of December 2020 there were 8,200 homeless people across Ireland. This number is an increase of 232% from when figures were first published on a month-by-month basis in July 2014. These numbers don’t include ‘hidden homelessness’ (e.g., People forced to ‘sofa surf’ or people living in squats), which of course brings the total to an even greater number.

The number of homeless deaths in Dublin alone in 2020 was close to 60, an increase from 49 the previous year [1]. It is shameful that this is permitted to happen, and is particularly unconscionable in a pandemic. Supposedly, everyone agrees that this is a serious problem, but the question lies on what can resolve it.

Allowing the market to solve the housing crisis will be led by the motive of profit for private developers and landlords. The problem with housing supply stems from the fact that the successive governments which have been beholden to the capitalist market have consistently refused to build social and affordable homes. Meanwhile, private developers in the last decade only belatedly starting building homes after the price of housing shot up.

The argument against rent controls and drastic rent reductions to affordable levels  also ignores the crucial fact that we do not view these measures as an end-goal, nor something that will itself solve the housing crisis. We favour mass state investment in public housing to increase the supply of housing itself. This would alleviate the rising costs of living. This can be assisted through a nationalised construction sector. Profit has no business being any factor in our solution to the homelessness crisis.

Ireland has seen a push towards a more rental-based housing market and is looking to continue this way into the future. For example, the cheapest new apartments in Dublin require a yearly income of €100,000 (Only 20% of Irish households have an income of over €80,000), with 76% of new units being built to be rented out, due to their greater profitability [2].

The clear incentives for the capitalist class and for our conservative politicians to oppose solutions to housing and homelessness crises are further exemplified when seeing that, in 2019, 22% of TDs were landlords, with 20% of Fine Gael TDs and 38% of Fianna Fáil TDs. The move towards a more rental based housing market pushes the working class into an even more oppressive relationship with the capitalist classes, with more and more of their wages going to landlords. It illustrates again the organised theft that lies at the heart of the system.

While we should push for a public housing solution to homelessness, we should also recognise the wider conditions that create homelessness. The existence of homelessness is a product of the capitalist economic model, which incentivises the pursuit of profit over the needs of the public.

To end the housing crisis, we must fight for immediate implementation of rent controls, a drastic reduction in rent to affordable levels, and a ban on evictions. This should come along with construction of public housing on a mass scale, enabled by the nationalisation of the construction sector. This should be a step towards the abolition of the oppressive relations of private poverty and landlordism all-together.