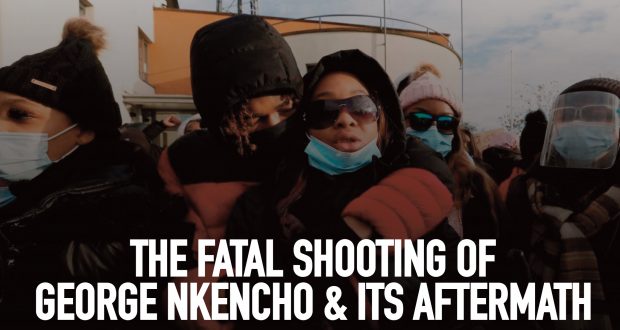 The fatal shooting of George Nkencho & its aftermath

Communities in Blanchardstown are in shock after the fatal shooting by the Gardaí of 27-year-old George Nkencho in Clonee on 30 December, devastating his family and friends.

Every person in our community has a right to live in a peaceful and safe environment. The details of what happened in Hartstown and later in Clonee are still not fully clear. Reports indicate that the multi-ethnic workforce and the shoppers at the Eurospar and the post office in Hartstown feared for their safety in a traumatic experience, with one worker assaulted by George Nkencho and later hospitalised. George Nkencho was reportedly behaving in an erratic and threatening fashion, and appeared to be in the midst of a mental health breakdown.

The events at Hartstown shops are of course very serious — every worker should be able to work in safety and nobody out shopping should be exposed to injury or threat. However, subsequent events are deeply troubling, and what happened at the shopping area does not alter the fact that it must be a huge concern to us all that George Nkencho, a young black man in the throes of a mental health crisis, was shot dead shortly afterwards at his own front door.

After leaving the shopping area, George Nkencho was followed and monitored by numerous Gardaí as he made his way back to his home in Clonee. Questions are rightly being asked as to why trained Gardaí could not have defused the situation, disarmed George Nkencho and arrested him without killing him, as is routine for Gardaí dealing with similar incidents.

A lethal response — shooting a person dead — is a completely unacceptable outcome in this situation. There are non-lethal methods of containing or incapacitating someone, which could and should have been adopted. The very serious questions posed regarding the approach of the Gardaí are relevant for everyone. We cannot allow a precedent to be set for how Gardaí can operate, both with regards to communities of colour, and working-class communities in general.

Video footage seems to indicate that the first of a number of shots (from the Armed Response Unit) was fired when George Nkencho had his back to the Gardaí, facing his front door. What provoked this first shot? Why was George Nkencho shot at five times? Can anyone credibly claim that the same excessive force would be adopted if there was a disturbance involving a rich white man living in an upper class area?

The contrast is being made between how Gardaí managed to de-escalate a very dangerous situation earlier this year with a man in Hartstown. This man had allegedly just brutally murdered his wife and was staging a siege with a sword at his home, but was arrested by Gardaí without any injury. The shooting dead of John Carthy, who suffered with psychiatric illness, by Gardaí in Abbeylara in 2000 was the subject of a Tribunal of Inquiry due to pressure from a widespread distrust of and opposition to the Gardaí’s use of lethal force. But even there, John Carthy who was armed with a loaded shotgun that he had fired, was killed after a full day-long stand-off at his home; whereas George Nkencho, who was armed with a knife, was shot at close range shortly after he and Gardaí arrived at his home.

A diverse community let down by Governments and the state

The diverse, multi-ethnic working-class communities and workforce in Dublin 15 (D15) have been badly hit by austerity over the past decade or more; by the housing and homelessness crisis; and by the mental health crisis that has been further exacerbated by the pandemic. In fact, the criminal lack of services, locally and nationally for those suffering from all forms of mental health issues is a major concern in relation to the plight of George Nkencho.

In the face of what successive governments and the state have meted out to the working class of D15, there have been important instances of resistance — from anti-water charges struggles in the 1990s to that of the 2010s, the anti-bin tax movement, and many anti-austerity / anti-bank bail out campaigns. The working-class communities of D15 also delivered a huge majority ‘Yes’ to Repeal and Marriage Equality, illustrating the power of solidarity. More recently, young people of colour from D15 have been organising their friends in struggle and solidarity with the global anti-racist Black Lives Matter movement.

The inspiring former Debenhams workers in the Blanchardstown Shopping Centre are in their ninth month of picketing after they were thrown on the scrapheap by the company and abandoned by the Government and state agencies. Many more will face similar hardship when the full effects of the current economic crisis hit in the months and years ahead. The spirit of solidarity, and organising and uniting in common struggle will continue to be vital.

Record of the Gardaí

Many working-class people will know the Garda record is not one of policing in the interests of working people. The thousands of anti-water charges local activists in D15 found there was no limit to the mobilisation of Gardaí in support of Irish Water. Meanwhile none seemed to be available in response to genuine issues in the community. Even the workers at Debenhams had to stand their ground against pressure from the Gardaí in the course of their dispute.

Working-class young people from all racial and ethnic backgrounds in D15 often experience mistreatment or harassment at the hands of the Gardaí. This is inevitably far worse for those young people from minority communities. An internal Garda survey reported in August 2020 revealed that 30% of frontline Gardaí interviewed admitted to having negative views of black Africans. Travellers also experience discrimination with the same survey indicating not a single frontline Garda reporting a positive attitude towards this minority community. How the Black Lives Matter movement in the US has resonated so deeply with black youth in Ireland is testament to the fact that the movement speaks to their own experiences, including with regards to police harassment.

Experiences of the black community

No one can know how someone else feels, or experiences issues. Just like how women experience sexism, racism and all forms of discrimination affect people’s lives in all manner of insidious ways every single day, which are often unseen by those not directly impacted. In order to build maximum solidarity, understanding and unity, those who don’t directly experience the forms of discrimination should try to consider and take this into account.

Often day-to-day racism is insidious or subtle, but sometimes it’s overt. In fact, bereaved friends of George Nkencho have spoken about how the fatal stabbing in a racist incident in 2010 of 15 year old Toyosi Shittabey, a D15 boy from a Nigerian background, had a huge effect on the mental health of his friend and team-mate, George Nkencho. Israel Ibanu, who played football with George Nkencho explained how there was a “brotherly love” between Toyosi Shittabey and George, and how Toyosi’s death “really affected him”. Israel Ibanu also spoke about how George, a talented footballer drifted from their beloved football club and that “there were no supports for him… He didn’t have anyone to speak to about what he saw happen to his friend.” Israel also explained how when they were both in school, George Nkencho frequently took a long route home after suffering multiple racist incidents, including once being chased with a baseball bat.

Young black people who regularly experience racism, including from police, have inevitably reacted with anger — but in some cases the anger has been misdirected, with protests at shops and at people inside Hartstown shops themselves. The people who work, shop or live in Hartstown are not to blame for George’s death, it’s the Gardaí who have the questions to answer. Although the young people involved were no doubt acting in grief, anger, and shock, actions such as these can have a counterproductive effect as they can unfortunately play into the hands of the far right and of racists who wish to sow division. The more that protests involve people from the whole community against injustice, the more powerful and productive they will be.

The Garda Síochána Ombudsman Commission (GSOC) carrying out an investigation is not satisfactory. The killing of George Nkencho must be fully investigated by a genuinely independent public enquiry, which must include members of the local community.

The Gardaí who carried out the shooting should be suspended pending such an investigation. The Gardaí should conduct themselves in a sensitive and respectful manner locally, but particularly in relation to the Nkencho family as they face a very difficult time of grief and the funeral in the days ahead.

Dialogue and cooperation in the community to deal with the issues

There is a tense situation at the moment in the community. However, the Socialist Party, and our area representatives, Ruth Coppinger and Cllr John Burtchaell, would like to stress that regardless of racial / ethnic / religious background, far more unites working-class people than divides us.

The current tensions stem from the action of the Gardaí in Clonee. Overcoming these tensions will need dialogue within the community. The Socialist Party and its representatives are trying to develop such a dialogue, in the knowledge that it is the community itself that can move things forward. That includes the community discussing and coming to a developed view of how the Gardaí should operate in the community and demanding and asserting that the community has a democratic right to determine and democratically control Garda policing policies and procedures.

It is in the interests of all ordinary people that there is full accountability by the Gardaí and that division is not stoked up in our community, particularly by far-right and racist groups who, as we have seen during Covid with their anti-mask antics, have no answers to the pressing issues in society but simply look to exploit tragic events. These groups have been consciously spreading disinformation online, including that George Nkencho had 30 convictions. Gardai have confirmed , as quoted in the Independent on 3 January, that there are “lies” being circulated widely online by “fascists and racists” and that in fact George Nkencho had no criminal convictions at all.

Dialogue, co-operation and action can help unite and strengthen the community in D15 and put us all in a better position to fight collectively for all our rights.

A united response by all working people and working-class communities is called for in D15. With Covid and the economic dislocation and crisis it has ushered in, working-class people are already struggling in difficult circumstances. The capitalist system’s answer to all crises is to turn the screw on working-class people. Within that, division amongst ordinary people on racial, gender or national lines are all an aid to the ruling elite to cut across effective challenges to their policies and rule.

In D15 and everywhere, let’s organise to challenge all oppression and injustice, and in doing so be always focused on how united working-class organisation and struggle is needed to bring about the socialist change we need for the sake of workers, the poor and oppressed, and the future of the environment everywhere.