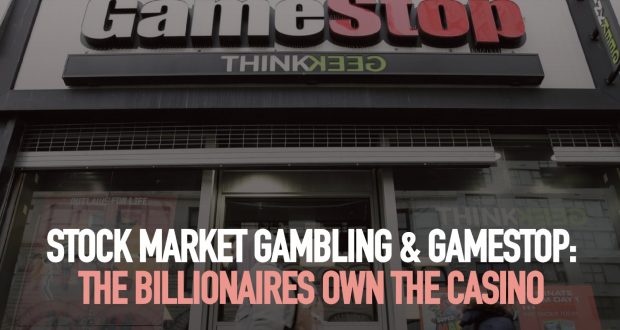 The price of shares for GameStop went up 700% in the past week due to what people have called a “bloodbath” with small investors, organised through a subgroup on Reddit, going against a Wall Street hedge fund’s prediction that the GameStop stock would fall.

GameStop has had massive losses in the past few years with the rise of the digital marketplace for games, and the decline in high street retail. It was almost inevitable that GameStop would close down in the next few years, or significantly downsize as the likes of HMV have. Last year GameStop closed 400 stores along with 600 the year before.

However, the hopes of the company changed in September last year when Ryan Cohen, the founder of an online retailer of pet food, invested $76 million, which brought the stock up to double digits for the first time since March 2019.

Despite this, GameStop was still not doing great and a New York-based investment company called Melvin Capital recognised this and tried what is called a ‘short sell’. Shorting, or short-selling is when an investor borrows shares from a broker and sells them immediately, hoping that the price will fall so that they can scoop them up again at the lower price before returning to the broker and pocketing the difference — the more the price falls the more profitable for the short-sellers.

This can be risky, however, because if the price goes up the short sellers would need to buy shares at a higher price before returning to the broker. And this is what happened in this case. A subreddit (of 4.4 million users) called ‘WallStreetBets’ realised what Melvin Capital were doing and encouraged other small investors to put money on GameStop, thus increasing the price of the stock. When Mevin Capital realised what was happening it was forced to end its short sell and buy back the stock — losing billions themselves, but further pushing up the share price of GameStop.

This time last year GameStop was at $3.21 per share. On Wednesday, at its highest it skyrocketed up to $491 per share. The “little man” as news networks have called day traders, outsmarted a Wall Street hedge fund.

The elites recognised this and worked their corrupt magic. Robinhood, one of the biggest and newest trading sites, blocked people from buying shares in GameStop — saving Melvin Capital and many other companies from even worse losses. This, along with the unprecedented bailouts in the last year, shows again that capitalism is a rigged system, where the rules are written in the interests of the billionaires at the expense of the majority of society, including small-time investors. It is clear that capitalism is not really a “free market” for everyone, it’s a free market for elites.

Ultimately, this fiasco shows that the trading on the stock markets is nothing more than glorified gambling, but it is big players who own the casino. It shows the truly parasitic nature of capitalism. This is the billionaires’ system, which takes and hordes the wealth that working-class people create, instead of investing it where it is needed — to provide jobs, housing, healthcare, or transition to a zero-carbon economy.

Trillions of dollars are traded each day on financial assets, and obscene wealth is being amassed by the big companies and super-rich elite in the US. This is at a time when Congress debates whether or not to give $2,000 in Covid relief to workers in the US struggling to make ends meet! Capitalism is the biggest scam of all, and fiascos like the one that’s happened with GameStop just help to expose the system for what it is.