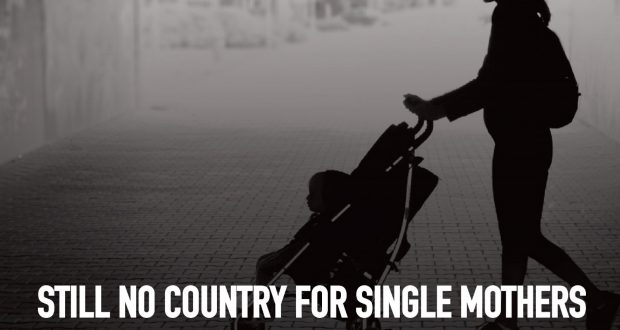 While the government scrambles to blame ordinary people for the state-sponsored torture of thousands of women and their children in Mother and Baby Homes, the Irish State continues to persecute and punish single mothers.

In the last year, reports of welfare inspectors, landlords and judges sexually harassing or threatening single mothers are a reminder of the misogynistic power imbalance stitched into the system.

A recent investigation by the Irish Examiner found that many women who receive One Parent Family Payment report being “harassed”, “stalked” and “bullied” by social welfare inspectors who routinely turn up unannounced to their homes, search through underwear drawers and ask intimate personal questions in order to determine whether the recipients are involved in romantic or sexual relationships. The reality that one parent families experience the highest deprivation rate in the country means that the fear of essential payments being stopped is an insurmountable barrier to reporting any incidents.

Last year, a HSE-commissioned report into a spike in suicides in West Dublin of women in their 20s and 30s – many of whom were single mothers – found that the housing crisis and intimate partner violence were contributing factors. It found that young mothers experiencing abusive relationships, poverty and mental health issues are “perceived as unlikely to engage with programmes because they fear that social services will “intervene” and that they could lose custody of their children.

The Covid 19 pandemic lays bare the deep inequalities facing working-class women. On the one hand women workers are fighting the virus on the frontlines – nurses, cleaners, retail workers – some of the most exploited sections of the workforce have been shown as vital for the functioning of society and on the other hand women have been disproportionately hit by job losses and extra care work. Family life has become increasingly stressful for all working families during the pandemic, but the anxiety and isolation is ten fold when you are single handedly responsible for the mental/physical health, education, managing and financing a family in a crisis.

The rate of “in-work poverty” is five times higher for lone parents than other households. Lack of affordable childcare and housing, and the slashing of One Parent Family Payment and other benefits over the last years trap single parents in insecure, low paid or no work.

One in every four families with children in Ireland are headed by a lone parent. Yet the Irish state still presides over a welfare and court system that operates as if women and children are an extension of, or the property of men. The fact that women are forced to seek child maintenance from abusive or even dangerous ex partners, or that benefits are threatened or stopped when women enter new relationships reinforces financial dependence on men, a dated, dangerous concept.

It is no accident that working class single mothers are continuously scapegoated by the political establishment or that they are portrayed as reckless, lazy, welfare cheats, often sexualised and shamed in the media. The system relies on the existence of sexist attitudes in order to get away with implementing cuts to vital benefits and public services, exploitation and inequality. The devaluing of single parents or of working class women generally contributes in perpetuating macho culture, gender violence and victim blaming.

Fianna Fáil, Fine Gael, the Green Party and the Labour Party are not only culpable in the tragedy of the Mother and Baby Homes – they are directly responsible for the ongoing and systematic mistreatment of single mothers and their children.