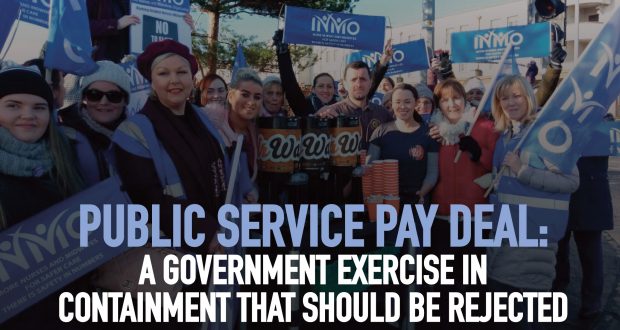 Public Service Pay Deal: A government exercise in containment that should be rejected

“Building Momentum” is the title given to the follow up to the Public Service Stability Agreement which expired at the end of 2020. The new agreement negotiated between the Department of Public Expenditure and Reform on behalf of the government and the Public Services Committee of the Irish Congress of Trade Union’s (ICTU) is being voted upon by rank and file members of the affiliated unions. The outcomes of the various votes within each union will be aggregated electoral college-style in mid February, so that regardless of the popular vote, a majority acceptance – big or small – in a handful of the larger unions effectively signs up all public servants to the deal.

The headline provisions include two 1% / €500 (whichever is larger) annual rises on 1 October this year and 1 October next year. In other words, a public servant on €50,000 or more will get 2% over the two years; a public servant on €25,000 or less will effectively get 4%; and those between €25,000 and €50,000 will get something in between 2% and 4%. Official projections for inflation over the same two-year period is 2.5%, though this projection excludes rising house prices and does not give due weight to major expenditures for many households, such as childcare.

The delivery of the 1% / €500 x2 is tied into agreeing workplace changes, but these changes are not going to be negotiated until after the ballot and concluded by the end of March! There is a real hostage to fortune here. The types of changes being pointed to in the document include longer opening hours and retention of the ability of employers to redeploy workers up to a distance of 45km, which are ironically flagged alongside a commitment to continuing family friendly work practices!

The other provisions of the deal cover legacy issues arising from the succession of cuts and impositions inflicted on public servants during the austerity years which remain unreversed.

There is a fund equivalent of 1% of the public service pay bill set aside for a ‘Sectoral Bargaining Process’ to be paid on 1 February 2022. Here is where some sector specific grievances are meant to be addressed. Separately, there is a fund of €150 million to cover the partial restoration of premia and overtime rates that were cut in 2013. The additional hours forced through with the Haddington Road agreement will be examined by an ‘independent body’ with no firm commitment for their reversal.

There is a passing reference to Special Needs Assistants who have been recruited in significant numbers by FORSA in recent years, but no commitment on ending the term-time arrangement that sees them unpaid over the summer months. Finally, there is a promise of an increment jump for teachers to narrow, but not eliminate, the two-tier pay regime that has been in force for a decade.

The most insidious feature of this deal is the dispute resolution mechanisms which are consciously designed to disempower workers and dissipate anger in the face of assaults on working conditions.

If a matter of dispute arises in a particular sector, for example an attempt by management to force through adverse changes in work practices as has been the case in the Department of Social Protection in recent months, the agreement requires that workers swallow the changes in work practices while an initial “six week bilateral engagement” takes place between the union and local management. Subsequent to that the matter can be referred to the “Sectoral Oversight Body”, and then from there to the Workplace Relations Commission (or Conciliation and Arbitration in the case of the Civil Service), and assuming no agreement is reached there, on to the Public Service Agreement Group, and from there to the Joint Review Group, and from there to the Tripartite Implementation Body!

That is no less than six stages of engagement with senior public service management and trade union officials in the driving seat before the idea of industrial action can even be entertained. If these stages are observed it would mean in practice workers having to accept management diktats for the majority of the lifetime of the agreement, if not its entire two-year lifespan.

Compare the above convolutions to the decisive stand the ASTI Executive Council took in recent days in directing their members to not cooperate with a hazardous return to schools for Leaving Cert students, which forced a back down by the government in a matter of hours. This is precisely the type of workers’ power this agreement is designed to cut across.

While there is a promise to remove FEMPI which legally empowers the government to unilaterally (negatively) alter public servants’ contracts, the big stick that is being wielded in this agreement is that none of the pay provisions will be honoured if there is industrial action on any issue covered by the agreement.

A weak and nervous government

The executive of FORSA, the largest union that organises in the public service were unsurprisingly quick out of the traps in recommending a Yes vote but there was not unanimity on the executive on this recommendation. SIPTU’s executive has likewise recommended acceptance. The TUI have recommended a No, but it will fall to committed activists to ensure that a No is delivered and likewise in the ASTI where it is anticipated its central executive council will recommend rejection. The INMO and INTO will likely recommend acceptance, not least given that general secretaries from those two unions, alongside FORSA and SIPTU, made up the ICTU Public Service Committee negotiation team.

This deal is fundamentally an exercise in containment. The government does not have the confidence of its predecessor a decade ago during the financial crisis to impose a fresh round of cuts on public servants, which is what they would ordinarily like to do in light of the massive deficit that has built up during the pandemic. They correctly estimate that if they attempt cuts public sector workers would likely put up a stiffer resistance now after the bitter experience of the austerity years that was only arrested when working-class people, thousands of public servants among them, rose up during the water charges struggle.

This is all the more the case in light of the experience of Covid which placed massive additional demands on public service workers, not least in healthcare, something recognised and appreciated by the wider public.

The inclusion within the deal of separate and delayed processes — ostensibly to deal with the various legacy issues — they hope will overcome the pockets of lingering discontent among the likes of nurses, teachers as well as the defence forces.

Strategy needed to achieve No vote

So while the confidence is not there on the government side for an assault on public service pay and conditions at this juncture, neither at the same time do we have a union leadership that is capable of leading a fight for real cost of living pay increases and a total reversal of all the austerity years. That is obvious in the case of those unions whose leaderships are calling for a Yes vote, but the intent of those union leaderships who are recommending a No has to be likewise called into question.

They need to offer an alternative strategy, specifically one that involves the ‘No’ unions coalescing and leading a campaign on pay and conditions backed up by action that would in turn appeal to the ranks of the ‘Yes’ unions to exert pressure on their leaderships. They also need to point to the massive sources of wealth, as well as untaxed and under-taxed economic activity, in Irish society that could fund an expansion of public services as well as decent public service pay rises. The Sunday Times Rich List last October revealed that in the course of the prior 12 months, the 300 richest people in Ireland increased their wealth by 7.3% giving them a total wealth of €93.7 billion.

Unfortunately the economic policy of the official trade union movement, as evidenced in separate documents last year produced by ICTU, SIPTU and UNITE, are at best mildly reformist but frankly not sufficient to ideologically equip workers with the arguments to back up a struggle for real gains on pay.

In the absence of an alternative strategy it is most likely that the deal will pass but without enthusiasm among public service workers. This does not spell two years of industrial peace. It never has with previous deals. The nurses in particular demonstrated in 2019 that notwithstanding the fact that their strike did not realise its full potential, thanks to their leadership, that despite technically breaching the then pay agreement suffered no sanctions in the manner secondary teachers in the ASTI did when they engaged in action. Again this was a display of nervousness by the government who realised that the nurses’ action was effective and enjoyed public support.

Noone could describe this government as strong and impervious to pressure as events this week can attest. But the initiative for seizing opportunities for action during the lifetime of this pay agreement will have to come from below. Side by side with this, the task of establishing and developing activist groups that can challenge the conservative leaderships in the unions remains if we are to break the cycle of poor pay deals.

The pandemic restrictions which have isolated many public service workers from each other because of home working, alongside the prolonged suspension of in person union branch meetings and conferences, has in reality meant a serious curtailment of union democracy and impeded the ability of activists to reach out to fellow members and make the case for a No vote. But every opportunity to communicate that via social media, electronic leaflets and Zoom meetings should be pursued.

However it is not simply a matter of trying to maximise a rejection of this deal, but also establishing and extending networks of union activists particularly among the influx of new younger public service workers who have joined in recent years, post the lifting of the recruitment embargo, and who suffer the most from the cost of living crisis and have the most to gain from a fighting strategy.