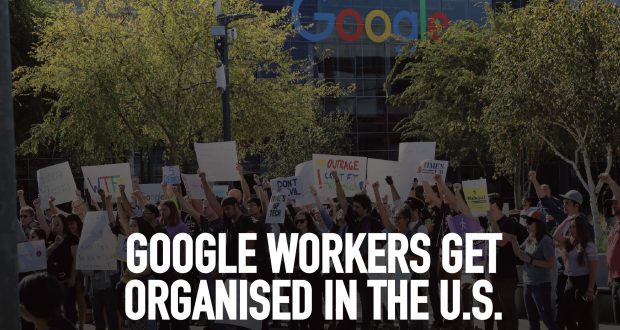 Google workers get organised in the U.S.

Some good news to start the year came on Sunday 3 January. 230 workers in Silicon Valley, California, announced that they are going to get organised into a trade union: the Alphabet Workers Union (AWU) — Alphabet is the parent company of Google. This is a notable first at a major technology company in the US, and a major multinational.

“This is historic—the first union at a major tech company by and for all tech workers,” Dylan Baker, a Google software engineer, said in a statement.

“We will elect representatives, we will make decisions democratically, we will pay dues, and we will hire skilled organizers to ensure all workers at Google know they can work with us if they actually want to see their company reflect their values.”

The establishment of a trade union did not develop from nowhere. Google workers have a recent history in collective organising, and years of building trust and bonds of confidence was a prerequisite for the creation of this union. The core group of Google workers have a sizable (but achievable) task ahead of them. Gathering support from enough of Alphabet’s 120,000 workers will have its challenges. Additionally, Google may not recognize the union voluntarily given its history of clamping down on workers organising. However, when you look at the recent history of Google workers there’s plenty of room for optimism to believe that workers will commit to this project.

In 2018, thousands of the workers signed a petition protesting Project Maven — a contract to help the U.S. Department of Defense track individuals in video footage captured by drones. That pressure campaign was successful, as the contract was terminated.

Later that year, Google announced it would end its practice of forced arbitration after 20,000 workers staged a walkout critical of the company’s handling of sexual misconduct. It should be noted that this instance occurred in the era of #MeToo and the emergence of a new global women’s movement. Movements against oppression — be it sexism, racism, homophobia or transphobia, are positively politicising workers in the workplace.

This is combined with growing opposition in society generally to wealth inequality, lack of affordable housing and increasing exploitation on the part of capitalism, as witnessed early last year in the support for the candidacy of Bernie Sanders. Such politicisation can play a crucial role in building a new organised workers’ movement.

Not an isolated incident

The establishment of a trade union by Google workers is the culmination of processes where a group of Google workers came to the understanding that they have more to gain through collective organising than being isolated and disorganised.

The creation of the Alphabet Workers Union comes amid a surge of organising at tech companies. It is not an isolated event.

Around 40 Spin e-scooter workers voted to unionise in 2019, 15 employees at delivery app Instacart did the same last year and Kickstarter’s staff became the first white-collar tech workforce to unionise shortly after.

There has also been developing struggles with Facebook and Amazon workers in recent years. In Seattle many Amazon workers supported Kshama Sawant, Socialist Alternative’s city councillor, re-election campaign. The basis of many Amazon workers supporting Sawant boils down to her unconditional support to all workers. Her history of fighting for $15 dollars an hour minimum wage has inspired many. Seattle is a major tech town, and is the home of Amazon. It is in many respects the belly of the beast as Jeff Bezos both lives and operates from there. Google workers organising into a trade union could very well give an impetus to Amazon workers struggling to set up a union of their own.

Just before Christmas thousands of Amazon workers at an Amazon warehouse near Birmingham Alabama moved close to holding a vote on whether to form a union. The election is expected to happen early this year — which would be a milestone moment for organised labour in the U.S.

All of the above points to a growing trend of precarious workers and contracted workers of the gig-economy pushing towards strengthening their position through collective organising and struggle.

The establishment of the Alphabet Workers’ Union in California deserves focus and examination from exploited tech and precarious workers throughout the world. Many multinational companies are present in Ireland, such as Google, Apple, Microsoft, to name a few.

Union organising in this sector is notoriously low. However, as recent developments in the U.S. illustrate, workers can get organised. In 2018, Google workers in Ireland joined in the walkout against sexual harassment with their colleagues internationally. This points to the international nature of labour organising — what happens with workers in one country inspires and motivates workers in the next.

It is quite possible that the action of Google workers in the U.S. will have a reverberating effect with precarious workers throughout the world and will inspire confidence and convince more workers of the need to join and get actively organised in trade unions. It is only through self-organisation from below that workers can win real gains and fight the growing exploitation of the bosses’ system. Workers need to ensure that when they are organised in trade unions that all their officials are held accountable — by being elected, subject to recall and living on the wage of the members they represent.

This new year, let us all resolve to join a trade union and to rebuild the fighting rank-and-file tradition of Connolly and Larkin!