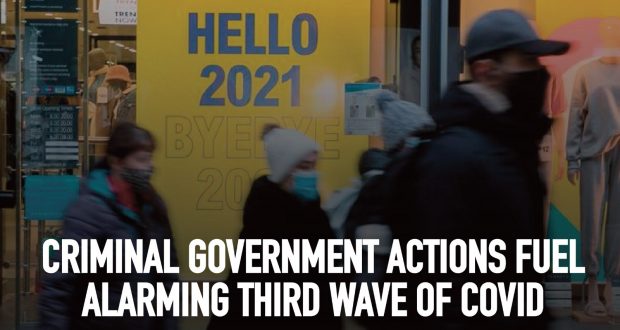 Yesterday evening, a new daily record of 7,836 recorded Covid cases was announced as the alarming third wave continues. As well as cases, hospital admissions, including those in ICU, and deaths are rising quickly. Despite the enormous sacrifices made by working-class people over the last ten months, we are now in a worse situation than the previous height of the crisis in March and April 2020.

This horrific vista, combined with a new lockdown, has completely overshadowed the positivity that many felt at the close of 2020 with the announcement of the vaccines. Many will be dismayed by the fact that they must again curtail visits to friends and family, and generally must restrict their movements. Added to this, many workers will fear the consequences for their jobs and incomes. This “yo-yo” cycle of lifting restrictions, only for them to be quickly re-imposed is a disorientating experience for most people and will only help fuel the mental health crisis, and other crises associated with Covid, in our society.

Who is to blame?

While the new strain of the Covid is a factor in this wave of the crisis, it is not its fundamental source. We can, and should, point the blame for the horrendous spike in cases in one direction: the present government which criminally gambled with our lives and health by re-opening the economy at the beginning of December.

In doing so, they once again ignored the recommendations and advice of the public health officials in NPHET who argued against opening the hospitality sector, while not opposing house to house visits over the Christmas period. When there was a demonstrable rise in the number of cases in the week running up to Christmas Day, they refused to close non-essential retail in the period before New Year’s Eve, despite the clear health hazard that this posed. The idea that “nobody saw this [a new spike in cases] coming”, is a lie that is now being shamefully parroted by the media. In fact, the Government was warned, they simply chose to ignore it.

The failure of the Fine Gael / Fianna Fáil / Green Party government to implement the necessary measures to suppress the virus is not simply a result of their incompetence. From the outset of this crisis, they have prioritised the interests of businesses and their profits over our health and wellbeing. This is what explains its criminal negligence in the face of a developing crisis. This is the second time they prematurely opened the economy, having done so in the summer. They ignored and, in the case of Leo Varadkar, publicly derided the advice of NPHET in October, only to belatedly implement these measures.

But even now they refuse to take the action necessary to protect public health. Having originally taken, under pressure, the correct decision to close schools for the month of January, the Government are now trying to force 60,000 Leaving Cert students and 30,000 teachers into school for three days a week during a raging pandemic! This proposal is clearly an attempt to avoid the cancellation of the Leaving Cert exams this year. This is outrageous, and a clear example of how the essential conservatism of Ireland’s establishment is a barrier to fighting this pandemic.

They have failed to put in place a proper test and tracing system. The system in place is coming under enormous pressure. They continue to oversee a two-tier health service, and refuse to bring private hospitals into full state ownership and equip the system to deal with an upsurge in Covid cases.

The wealth and resources exist in our society to fund the measures necessary to tackle this pandemic, while maintaining the jobs and incomes of workers during a shutdown. The problem is that they are in the hands of a small super-rich and big business elite, to which the Government kowtows.

This underfunding of our health service will likely have an adverse impact on the rollout of the vaccine in the coming months. Another example of how the government is gambling with our health and lives is the fact that they are toying with the idea of extending the period by which people get the second shot of the Pfizer and Moderna vaccines from four to 12 weeks. This extension goes against the advice of the scientists that have developed these vaccines and it clearly reflects a desperation on their part as they try to get the virus under control. This points to the need for a vaccination programme to be put under the democratic control and oversight of health workers and broader sections of the working class. On this basis we can ensure it is implemented in a manner which is efficient, equitable and based solely on the interests of public health.

The Socialist Party stands for taking immediate measures that tackle this crisis and which ultimately mean breaking with the criminal logic of this system. We say:

Mass testing, including if necessary the entire population being tested over a short period of time, alongside rapid tracing and treatment, is the most effective way of dealing with the virus and reduces the need for restrictions. To achieve this we need emergency requisition of all private labs, as well as investment in state labs and the development of necessary infrastructure in workplaces, schools, colleges, airports and all major public locations. This is a vital investment for future potential pandemics. PPE must also be generally and freely available, produced and supplied by the state.

We are currently paying the price for the gross underfunding of our health service. For immediate investment to recruit nurses, doctors and other staff, necessary beds and ICU capacity, equipment to tackle an upsurge in Covid cases, and to maintain non-Covid health services. For the provision of 24-hour and free counselling services to tackle the mental health crisis.

This unjust, two-tier health service must go – nationalise the private hospitals with no compensation. Integrate them into a fully resourced national public health service that is free at the point of use, with staff and representatives of the broader community at the heart of management. The health services and health workers in the North and in the South, including those involved with testing and tracing, should fully cooperate and have an integrated system to deal with the pandemic. Bring big pharma into public ownership – provide drugs and vaccines for need not profit. Nationalise all privately owned nursing homes.

3) Covid and the case for socialist change

Seize the wealth and resources of big business and the super-rich and bring them into the democratic public ownership of the working class, where the resources are organised by and for the majority in society. On the basis of an economy that is democratically planned, we can ensure that these resources are invested to meet the challenges of this and other potential pandemics, as well as climate change – all while protecting and raising the living standards of the vast majority.