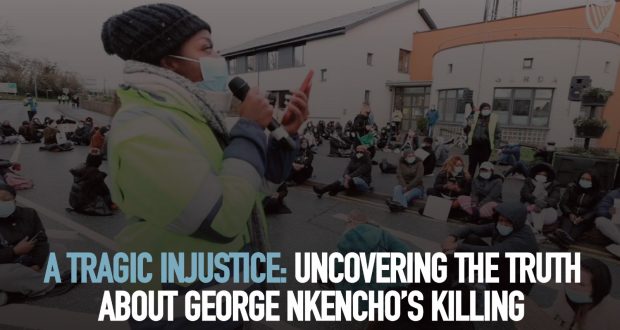 The tumultuous year that was 2020 ended with the tragic shooting in Dublin 15 of George Nkencho — a 27 year-old Black man — by the Garda Armed Support Unit.

News of the shooting and the events surrounding it sparked considerable discussion in the local community, and nationally on social media — where unfortunately debate tended to be heated and characterised by misinformation (deliberately spread by far-right elements) and all-too-often by racist prejuduces.

As the weeks have passed, more facts have come to light.. Three things are becoming clear: the Gardaí have serious questions to answer; George Nkencho was a victim of an unjust system in a myriad of ways; and efforts to bring about solidarity and unity of the working-class communities in Dublin 15 are needed.

Within the local community of Hartstown itself much of the initial focus was understandably on the altercation that happened between George Nkencho and the staff at the local Eurospar just prior to the shooting, in which one member of staff was injured and others left shocked and frightened. This was compounded the following day when a spontaneous protest by young people — distraught by the killing of George — misdirected their anger at the staff in the Eurospar. This multi-racial workforce were innocent victims too, and not responsible for the violent conduct of the Gardaí.

However, notwithstanding the seriousness of the incident at the Eurospar, 30 December 2020 will be remembered in years to come for one reason: a young Black man in the midst of a mental health breakdown, surrounded by 15 Gardaí outside his home, was shot six times (twice in the back) and died.

George Nkencho should be alive today. The situation should have been deescalated without resorting to lethal force. The Gardaí involved must be investigated, as part of a public inquiry with community and family participation.

The Gardaí are responsible for George’s death but that’s not the end of the matter. George was experiencing a major mental health episode. If the support and treatment for people suffering as George was were available to him, it’s unlikely his breakdown would have occurred, or at least not in the way that it did.

Who’s responsible for the atrocious mental healthcare and lack of services in this country? The answer is the successive right-wing governments that have underfunded, mismanaged and privatised our health systems for decades. In that sense, FF, FG, Labour and the Greens also have questions to answer in relation to George’s death.

For socialists, the problem of mental well-being is not an individual problem, it is a social problem. The epidemic of mental illness is a product of a capitalist society that alienates and isolates people, and fails to provide basic needs (decent housing, jobs etc.) and rights (equality, freedom etc.). All working-class people are affected by these things, but some more than others.

As a young Black man, George Nkencho experienced racism daily. As a teenager, he experienced the loss of his friend Toyosi Shittabey, who was murdered in a racist attack in Tyrrelstown in 2010, not far from where George lived. These experiences deeply affected George, and are crucial to any understanding of his breakdown.

The reality of racism

The issue of racism specifically has been a point of much debate in the aftermath of George’s death. Many who argue that the Gardaí have no questions to answer, make the point that race had nothing to do with it — George had a kitchen knife, and the Gardaí acted in self defence. Others, they argue, are making this an issue about race.

Apart from any other problems with this line, of which there are many, it betrays a profound misunderstanding and underestimation of racism in society and how it manifests itself. Any outright denial of the possibility of racist prejudices being a factor in George’s death fails to take into account the depth of daily racism experienced by Black people in Ireland — for example, an internal Garda survey revealed that 30% of frontline Gardaí interviewed admitted to having negative views of black Africans.

The power of the slogan “Black Lives Matter”, which has gone global in recent years, is that it lays bare the reality that Black lives are valued less. This is evidenced most graphically by the violent treatment of Black people at the hands of the police in the US, but also in Ireland by continuance of the inhumane Direct Provision system for example. Fundamentally, it’s a product of a capitalist system that needs racist division to maintain the inequality inherent to it.

For members of the African communities in Ireland, almost as concerning as shooting itself was the degree to which far-right racist agitators were able to intervene with insidious lies online, spreading fear and outrageous mistruths very widely. It revealed an ignorance about racism in Irish society that must be challenged. This will in part be the aim of the ‘justice for George Nkencho campaign’, as it fights for the truth to be known.

The Socialist Party in Dublin 15 will be fully assisting that campaign, as well continuing our efforts to bring working-class communities together to fight for our health, rights and livelihoods in the context of this developing capitalist crisis.