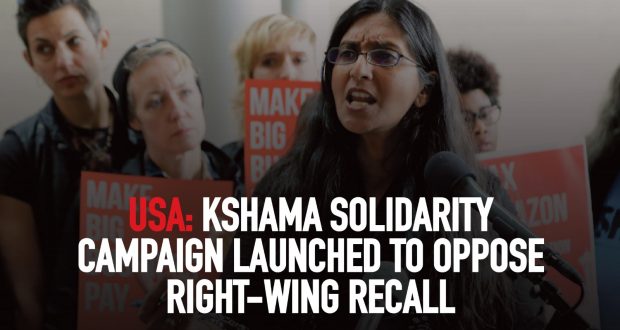 Article by a member of Socialist Alternative, our sister organisation in the US, about attempts by big business and the right wing to remove our Seattle City Council member, Kshama Sawant, from office. This is a serious attack on the left both in the US and globally, Kshama and Socialist Alternative have led major battles that have resulted in important gains for working people.

Big business and the right wing are furious about the impact of socialist politics in Seattle and are going all-out to try to remove Councilmember Kshama Sawant from City Hall with a recall campaign.

This recall effort to remove Kshama Sawant from office comes just months after Kshama’s council office and a grassroots movement in Seattle won the Amazon Tax—a tax on the top 500 companies in Seattle that will raise an estimated $210-240 million a year, which will be used to create tens of thousands of green union jobs by building permanently affordable social housing. This momentous victory represents a $2 billion transfer of wealth from the hands of big business to working people over the next decade.

For over seven years Kshama Sawant’s socialist City Council office has demonstrated what it means to stand unambiguously on the side of ordinary people as an elected official. Kshama’s unique movement-building approach has led to historic victories like the $15 minimum wage, landmark renters rights laws like the winter evictions ban, and a first-in-the-nation ban on crowd control weapons during the Justice for George Floyd uprisings this summer.

As just one city councilor, Kshama doesn’t rely on legislating change and back-door compromises with Democratic co-councilors and big business interests. She turns to working class people, youth, and progressive organizations in the city of Seattle and works with them to get organized in their workplaces, schools and neighborhoods, show up to City Hall, and demand what is needed (not what is acceptable to the political establishment). That’s how, as just one city councilmember, she has driven such historic wins.

This recall campaign is an attempt to reverse every one of these gains and push Seattle politics back to the right. It is just the latest in a series of attacks from the right wing and big business, and we should expect these attacks will only grow in severity and frequency as we fight for and win more victories, and resources, for working class people in Seattle.

Less than a year ago, Jeff Bezos, big business, and the right-wing tried to buy the city council, spending millions to support business-backed candidates across the city. Our volunteers got organized, built a grassroots campaign, and knocked on over 120,000 doors to defeat the richest man in the world. While the ruling class thought they had defeated Kshama and the movement’s first attempt at an Amazon Tax in 2018, she was re-elected in 2019 and went on to help pass a second tax on big business that was four times larger than the first. After failing again and again to beat the three-time elected socialist Councilmember at the ballot, they are now trying to make use of the courts to remove her by introducing an undemocratic recall effort.

The victories we have won in Seattle have changed the lives of countless people and set powerful examples that have again and again spread across the country. Kshama’s example has raised the confidence of working people that we can fight for and win an alternative to the misery and brutality of life under capitalism. That example is more threatening to the ruling class than any individual victory we have won, and the ruling class will do whatever it takes to try to crush the confidence Kshama inspires in our movements.

Going forward, we can expect a tsunami of corporate cash in this fight, along with a slew of corporate media propaganda. The recall campaign has already raised over $123,000, with $50,000 of that in anonymous donations in an obvious attempt to hide right-wing and corporate donors. Billionaire Trump donor Martin Selig is supporting the recall campaign, after having spent $25,000 to repeal the first Amazon Tax and maxing out to Kshama’s opponent last year. We have every reason to expect massive corporate PAC money again as in 2019. Of the donations that have gone publicly on record to the recall campaign, donor’s occupations tell the story of who’s funding this effort: “Investor,” “CEO,” “Venture Capitalist,” “Investment Banker,” and “Financial Advisor.” It’s clear this will be a repeat of ultra-rich, right-wing donors trying to buy the District 3 council seat.

We know the courts, like the police, are no friend of working people. We have seen this already as the King County Superior Court upheld the recall charges against Councilmember Sawant for standing with the Black Lives Matter movement at the same time that the state Supreme Court unanimously threw out the recall charges against corporate Democratic Mayor Jenny Durkan for overseeing a vicious crackdown on the movement. There will not be a single opportunity for Kshama to defend herself against the accuracy of the recall charges; the law in Washington State says that the charges don’t need to be proven, but will nonetheless have the appearance on the ballot as though they are established facts.

Already we’ve seen corporate media go on the offensive, publishing articles spuriously claiming Kshama encouraged violence and lawlessness by standing side by side with peaceful Justice for George Floyd protesters. The Seattle Times, for one, has attempted to equate Kshama and the Black Lives Matter movement peacefully protesting in Mayor Durkan’s neighborhood (which is one of the recall charges) with the violent right-wing plot to kidnap the Michigan Governor.

What these corporate media articles neglect to mention is that the mass protests this year have been overwhelmingly peaceful and have had a powerful impact in pushing back against racism in the era of Donald Trump. In Seattle, they have also helped lead to two historic victories: the first-in-nation ban on chemical weapons and the Amazon Tax for affordable housing. We know what actually keeps our communities safe: good paying union jobs, affordable housing and fully funded education and public services, paid for by taxing the rich and not working people—Kshama and our movements have fought for these at every turn against the opposition of the political establishment.

The Kshama Solidarity Campaign has hit the ground running, building up a fighting campaign apparatus and raising $110,000 in the first six weeks of our campaign, with already over 1,200 working-class and middle-class donors. Our campaign is building the demand to cancel rent for those who’ve lost their incomes due to the pandemic and against this coming wave of evictions. We’re campaigning for a socialist Green New Deal in Seattle to end all fossil fuel emissions by 2030 and to create thousands of well paid union jobs. We’re demanding an elected community oversight board with full powers over the police, including setting department policy and hiring and firing of officers. In Seattle, the Office of Police Accountability is completely defanged: of 19,000 complaints submitted to the OPA from the protests this summer, the only results are 1 written reprimand and another officer facing a potential paid suspension of a few days.

Despite the enormous resources of the right-wing and big business, we must remember what we can win when we get organized. The Kshama Solidarity Campaign is getting organized—join us. 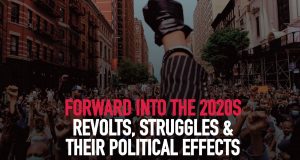 Forward into the 2020s: Revolts, struggles and their political effects