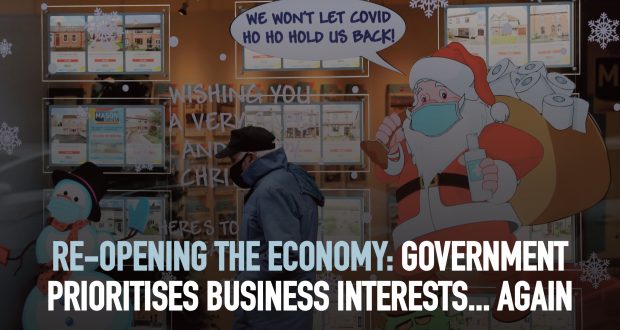 Last week saw the move to Level three Covid restrictions. The six week period of Level five restrictions certainly had an effect in reducing the infection rate. However, a recent increase in cases shows major dangers ahead, with the full rollout of a vaccine likely not to take place until well into next year.

While the 14-day incidence of Covid cases is down 25%, the seven day incidence is up 11%. Dr. Tony Holohan of NPHET said that “We’ve passed the low point at a much higher level than we would have liked” and warned of the danger of numbers rising up to 450 a day before the end of the year. If that were to continue it would pose the danger of an out of control situation, including the basis for new restrictions in January or February.

This situation is the responsibility of the Government. In the first instance, Leo Varadkar attacked NPHET and their advice in October before being forced to implement the same policy two weeks later as infection rates grew. More fundamentally, the need for a second lockdown itself arose from the government’s decision to prioritise profit over public health in their policies over the summer in particular. Having failed to use the first lockdown to develop a world class testing and tracing system and to transform the capacity in the health service, they then proceeded with a rapid reopening of the economy which was driven by the demands of business lobbies not public health.

Now we face the danger of a similar situation. In terms of the Christmas period, a lot of the focus in media and political discussion has been on people’s individual behaviour and the threat posed by too much travel and socialising. While it’s completely understandable that people will want to see family and friends over this period, there obviously does need to be caution and adherence to public health measures. However, what’s missing is that once again the government has prioritised the reopening of the economy even though this clearly adds to the danger.

Pubs serving food, restaurants, hotels and retail have reopened. Clearly this poses huge dangers. For example, in September, NPHET reported that 1 in 5 cases in Cork were linked to pubs and restaurants alone. Indeed, the government consciously chose to limit the number of household visits allowed in order to facilitate the opening of the hospitality industry. That fact exposes clearly that the increasing hostility to public health restrictions in the political, media and business establishment is not about people’s mental or social wellbeing, but about profit and in this instance ensuring that people spend money over the Christmas period.

Of course, working class people are suffering economically during this pandemic. Just this week, the liquidation of the Arcadia group of stores is threatening 900 jobs in the state. However, the Socialist Party rejects the false choice that is increasingly being presented between protecting jobs and incomes and protecting public health. That choice arises from a capitalist system where the economy is geared toward profit, not fulfilling peoples’ needs.

The richest 300 in Ireland have €93 billion and have increased their wealth during this pandemic, while multinationals have seen a significant increase in their profits. Public health and incomes can be prioritised if the wealth in society is publicly owned, democratically controlled and planned in the interests of all.