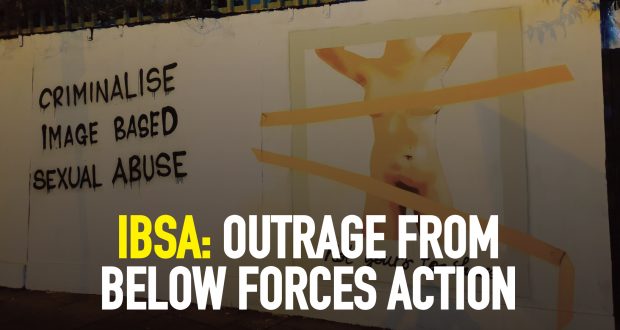 Outrage from below at IBSA forces action

No knowledge or consent

The sudden decision to deal with this issue comes on the back of huge public outrage after it became known that thousands of explicit images and videos of girls and women had been shared online without their consent by a group of five hundred men. It was reported that these images were stolen from apps such as Only Fans and Tinder, were images that were shared privately and in confidence, or were images taken without the knowledge or consent of the victim.

The five hundred men in question went to considerable lengths to set up a Discord group and to share and collate these images, with some reports stating that images and videos had been arranged according to the county that the victims reside in. These are men who live, work, study and enter relationships with women, and see no issue in betraying the trust of the girls and women that they encounter and reducing them to the status of objects.

We live in society that creates a culture where boys and men are taught that they have an entitlement to the bodies of women and girls from a young age. Where is this entitlement learned? In the last number of weeks, we were reminded of the long history in Ireland of church and state entitlement and control over women’s bodies with the attempt to seal Mother and Baby Home records. The Irish church/state alliance exerted control over women and girls by incarcerating them in institutions for perceived infractions of patriarchal order. The current Fine Gael/Fianna Fail/Green Party government sought to continue to exert this control through an attempt to deny survivors access to the information gathered by the Mother and Baby Homes Commission of Investigation. National outrage over this move forced the government to eventually back down.

Sexist notions can also be disseminated by schools as we witnessed last week when a school in Carlow reportedly told female students that they were not to wear clothing that ‘showed off’ the ‘female anatomy’ and that could prove distracting to male teachers. The principal was quick to deny this in media interviews, but the reality is that the story received such an echo because it mirrors the experiences of girls in schools across the country. The dangerous implication is that teenage girls are somehow responsible for the thoughts and actions of adult men.

Equally, that there is something inherently sexual about girls’ bodies which amounts to an insidious form of victim blaming often used in the justice system and wider society against victims and survivors of sexual abuse. This latest event caused another huge public backlash and the school in question was forced to come out and deny this version of events. Students in the school organised a petition (which at the time of writing has received almost 14,000 signatures) and some of the boys in the school wore skirts to school in an amazing act of solidarity.

Sexist ideology and the system

Sexist ideology and the sense of entitlement to girl’s and women’s bodies is transmitted through all of the institutions of capitalism from church and state, to the education system, social media and mass media. This ideology is so ingrained and omnipresent that it has become naturalised. If the last number of weeks have taught us anything, it is that these powerful institutions of capitalism can exert inordinate and oppressive control over the lives of the working class.

However, we have also learned that when the masses come together and express their outrage through the organisation that we have seen, these behemoths can be forced to retreat. When the working class organises collectively society is transformed.