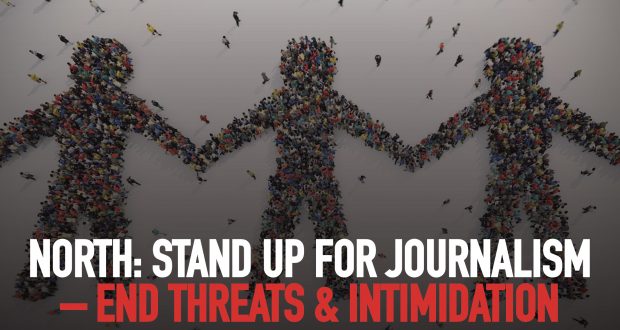 Journalists across multiple newspapers in Northern Ireland have received threats from both loyalist paramilitaries and ‘dissident’ republicans. The threats against journalists working for the Belfast Telegraph are believed to originate from the breakaway South-East Antrim UDA. Female journalists in particular have also been targets of misogynistic threats. The Socialist Party wholly condemns these blatant attempts to intimidate journalists who have been involved in exposing the criminality of paramilitary organisations. All workers have the right to work free from threat and intimidation.

The state offers no solution

The PSNI and state forces in general offer little in the way of resolution to these threats. The case of Martin O’Hagan, a Sunday World journalist assassinated in 2001, illustrates this. O’Hagan was shot several times from a passing car while walking home from a pub with his wife. The Red Hand Defenders – a nom de guerreused by the Loyalist Volunteer Force – claimed responsibility for his murder. The investigation into his death was dropped – with claims of “unsubstantiated evidence”.

More recently, journalist Patricia Devlin received numerous threats – including that her infant child would be sexually assaulted – from individuals believed to be linked to the neo-Nazi Combat-18 and loyalist paramilitaries. She has filed complaints with the Police Ombudsman after a failure from the PSNI to adequately investigate the threats.

Worse than just dragging their feet, the PSNI itself has acted to intimidate and silence journalists who have exposed state collusion with paramilitaries. Trevor Birney and Barry McCaffrey were falsely arrested after their documentary No Stone Unturned showed connections between state forces and the 1994 Loughinisland massacre. These arrests were aimed at having a chilling effect on investigative journalism generally.

Stand up for journalism

Investigative journalism has played an important role in exposing sectarian gangs and bringing to light the dark underbelly of state collusion with paramilitaries. This must be defended. Attempts to silence journalists through threats of violence must not go unanswered.

The Stand Up for Journalism campaign, initiated by the National Union of Journalists, is a positive step forward. Socially distanced protests and an online campaign took place, building solidarity for those under threat. In the past, demonstrations, walkouts and protest strikes organised by trade unionists have forced the lifting of paramilitary threats by giving expression to the opposition of working-class people to thuggish violence and intimidation. These are the traditions to which we must return.