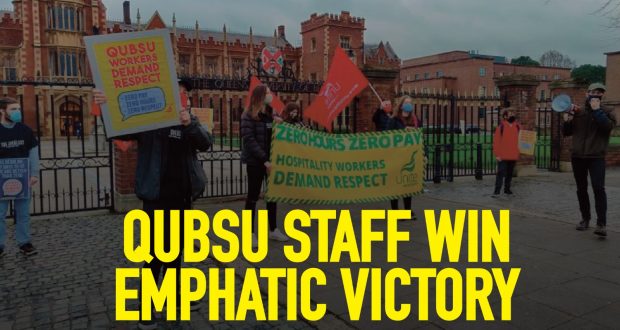 Campaign an inspiring example for all precarious workers

Unite members at Queen’s University Belfast Students’ Union (QUBSU) are celebrating a major victory in their impressive, seven-week-long campaign for respect and pay justice. The campaign developed after workers on zero-hour, casual contracts were left without pay since August as a result of the refusal of university authorities to enroll them on the government Job Retention Scheme (JRS).

As we have previously reported, this left many workers in financial crisis, unable to find alternative work in the midst of an economic crisis, with 45% of these predominantly young workers losing their living accommodation – leaving them technically homeless. At the same time, Queen’s University – running an operational surplus of £4.9 million, with over £600 million in reserves – was charging self-isolating students £210 per fortnight for food parcels, while chartering flights to ensure international students, regarded as a “cash cow” for the university, could attend (and pay their hefty fees).

It became clear to the workers that the money was there to secure their livelihoods. Unite workplace representative Barra Doherty explained to us: “At the time, we demanded to be fully reinstated onto the JRS going forward, with back payments to the date we were removed from the scheme. We also asked for a full apology from QUB for the distress caused to staff, as well as a guarantee of redeployment when work becomes available. We made these demands as we believe them to be reasonable expectations of our employer. Many hard-working staff members have been suffering financially and mentally throughout this pandemic, and QUB has the means to support them in return.”

This led a group of workers who previously were not union members to reach out to Unite’s hospitality branch, in which Socialist Party members play a leading role, to discuss the way forward. It was becoming clear that, after months of being denied an income and getting no answers from management, there was little to lose and that a fightback might deliver concessions.

“Our victory shows the true power of collective action in the workplace, and how change is possible. We managed to achieve victory against all odds, and it was a direct result of a group of workers coming together and speaking as one. If you have issues in work, or feel that your employer isn’t treating you with respect, join a union and take the power into your own hands!”

Within hours, union membership at QUBSU went from a small handful to dozens. WhatsApp groups and regular online meetings were used to answer queries and plan a strategy for the campaign. Importantly, the workers had few illusions that purely legalistic measures, such as a formal grievance process, would resolve this issue. They quickly set out to plan an escalating campaign of public action to pressure Queen’s University into giving into their demands.

The workers organised an online petition which was signed by over 1,800 people within days. They set about a campaign of leafleting and social media post to build support among students and the general public. They reached out for solidarity from other unions, the Student’s Union itself and particularly the University and College Union (UCU), which is already engaged in a dispute against casualisation and the university’s attacks on pay and conditions. This campaign culminated in a number of well-organised and attended socially-distanced protests, which gained significant media coverage and forced university authorities into taking the workers seriously.

Management initially doubled-down on their justification for not putting the workers on the JRS, making inaccurate claims that workers were ineligible for wage supports. They cynically tried to use Covid restrictions on the operation of the SU facilities, along with a projected fall in student numbers, to justify non-payment of wages. In reality, their decision was reflective of a long-term strategy of slashing staffing, as well as terms and conditions, to a bare minimum. Marketisation of higher education has seen Queen’s being run more like a profit-hungry corporation than a public educational institute.

Despite this, management reversed their approach almost overnight because of the growing groundswell of public support and the fighting determination of the workers to escalate into more militant action if necessary. This delivered a significant victory – not only securing ongoing wage support through the JRS, topped up to 100% of normal pay by Queen’s, but also back pay for the month of November and, crucially, trade union recognition.

Lessons for all workers on precarious contracts

This victory is all the more impressive when you consider that these workers only weeks before had no experience of organising or the trade union movement. It proves that, despite prevailing conditions for workers on zero-hour contracts, even small campaigns based on the principles of fighting and collective action can deliver wins. This outcome is not only a huge success for the QUBSU workers themselves, but also an inspirational example for all workers on precarious contracts.

The workers and their representatives are, however, not resting on this win and recognise that important battles lie ahead. This only marks the start of their efforts to challenge casualisation and link up with co-workers across the university to win improvements and challenge the ongoing race to the bottom.