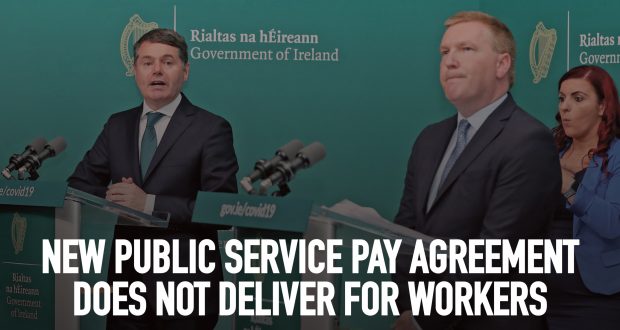 New public service pay agreement does not deliver for workers

The proposed new public sector pay agreement, “Building Momentum”, is being promoted by the mainstream media as a serious pay rise for workers. “Santa Clause has come early for public sector workers”, states one paper, wishing to convince workers that, ‘ho ho ho’ this is as good as it gets, when residing within the capitalist constraints of a pandemic and the looming chill of Brexit.

Prior to the details of the agreement becoming public the government and union leaders played out a news print charade of the “do’s” and “won’ts” of what will be agreed, with wage freezes dominating the narrative. The charade was no more that a cynical exercise by both sides in dampening down any belief that real wage rises covering the rising costs of living costs would be delivered by this Fianna Fáil, Fine Gael, Green coalition.

Chief Union negotiator, Kevin Callinan, general secretary of FORSA and chair of The Irish Congress of Trade Unions (ICTU) Public Sector Committee (PSC), stated, “The proposals were the best outcome that could be achieved”. This comment is a subtle admission that the union bureaucrats now have to hard sell this agreement to their members in ballots.

Their main selling point to members in the three parts of the agreement will be:

1) Mechanism to deal with outstanding issues, such as the ending of free labour hours of a previous agreement, the 2013 Haddington Road Agreement, which was sold as no more than a temporary measure for public sector workers.

2) A mechanism to address Sectoral Bargaining issues, which often deals with the conditions of service and pay of newer entrant “yellow pack” grades.

3) Acceptable approaches to pay, that will have to address in particular the pay discrimination of teachers, employed from the 1/1/2011 and public heath doctor pay and contracts.

To avail of the process any group of workers will have to comply with the handcuffing of this agreement’s ‘no strike’ clause or face exclusion from the process. The draconian and manipulative nature of this process on holding back struggle by workers on pay claims is grounds to reject the agreement straight out.

No trust in establishment politicians or union bureaucrats

If any worker is looking for resolution on pay or conditions, don’t hold your breath if ICTU are about. The issues scheduled to be placed on the priority list of 1-3 above are from activist-based unions that have and are ready to take strike action, and had broken or never accepted the outgoing Agreement (PSSA). The strike by nurses and midwives in the INMO in early 2019 shows this. Despite that campaign not achieving its potential thanks to the role of that union’s leadership, the then government were too fearful to freeze the nurses and midwives increments given the wave of public support they received when they went out.

Public health Doctors in the IMO have announced three days of strike action in January 2021 on pay and contracts. Two of the teachers’ unions have mandates to take strike action on ending pay discrimination. The government’s response from Health Minister Donnelly is that resolution is possible. Tánaiste Leo Varadkar, after ten years of pay discrimination for teachers, has admitted that it’s unfair. Fianna Fail, who viewed themselves as the initiators of austerity during the Great Recession that commenced in 2008, will be mindful that any unpopular move by them, could spell  political liquidation.

The union leaders, rather than evaluate the industrial and political landscape, and support their members to mobilise to take strike action to deliver a living wage and address the long-term lack of investment in public services, have chosen to limit this agreement to singular issues.

A measly 1% increase in October of 2021 followed by 1% in Oct 2022, will have any clear-thinking public sector worker concluding this is a pay decrease. Housing costs, high rents, child care costs etc. will all play a prominent role in the further erosion of living standards of both private and public sector workers. A struggle waged by the whole trade union movement, not just for real pay increases but also championing policies such the building of a 100,000 public and affordable homes, along with strict rent controls including enforced decreases, the provision of free child care, would represent serious intent.

Union activists will be left to prepare the case for members to reject this agreement and recommence the discussion for a democratically run public sector that’s adequately funded to address human needs. This is a time of fast economic change with likely inflationary pressures manifesting from Brexit in the next period, resulting in rising costs of living. The pandemic has taken a toll on working people on several fronts. Workers many be reconciled to accept this agreement as the line of least resistance given the media and union bureaucracy’s spin to accept and lack of confidence in an alternative route to obtaining real pay rises. However union activists will see the numerous shortfalls in accepting this deal and the morass that descends on workers as reality changes.

And like before, the best activists will mobilise to reject this deal, knowing that workers are at their optimum when empowered to take direct action to effect change. Time to build an alternative that delivers for workers.