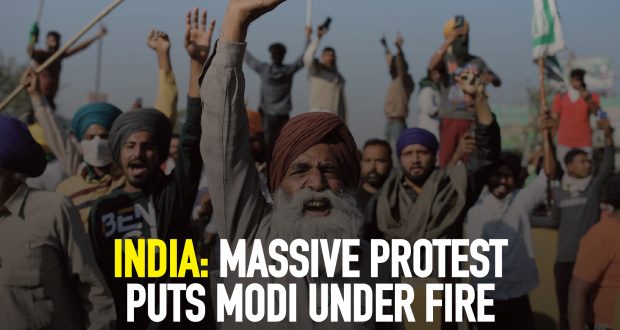 The protest against the Hindu nationalist regime of Narendra Modi of the BJP is growing to phenomenal proportions. A well-organised farmers’ protest keeps the capital Delhi in its grip. At the same time, on 26 November, there was a colossal general strike with 250 million participants.

Under the slogan ‘Dilli Challo’ (‘to Delhi’), thousands of farmers went to the Indian capital to protest against government measures that hit agriculture hard.

In September, the government introduced three laws to liberalise agriculture. From now on it will be possible to produce outside the government-controlled ‘mandi system’. Previously, all farmers placed their products on the fixed market in their region, where there were price agreements with minimum prices for many products. The government controlled prices and production. The new laws open the door for large companies and threaten to put further pressure on the farmers’ incomes. “We will lose our land and our income if large companies set the prices,” as one farmer put it to a BBC reporter. The average annual income of farming families in more than half of the Indian states was only 20,000 rupees (€225) in 2016. Once the market is liberalised, the minimum support price (MSP) will undoubtedly disappear. The government denies that this is the plan, but little faith is placed in it.

The farmers’ protest is taking place in northern India, including in states where the BJP is strong. In the 2019 national elections, the BJP reached 58% in Haryana and Rajasthan. They received less support in Punjab due to the Sikh people’s historical mistrust of Hindu nationalists. The state governments of Rajasthan and Punjab, led by the Indian National Congress, support the protests, mainly on the basis of political calculations and not as a challenge to the free market policy of the BJP. In Haryana, the alliance between the BJP and the local party JPP is under strain. Elsewhere, too, there is great pressure on BJP alliance partners. Even if this is mainly at state level, it undermines the BJP’s position in central government. While the BJP’ substantial extension of its electoral base in the rural areas was critical for its victory in 2014, these protests are the most serious challenge to Modi’s government from farmers in six years, and show that the tide has started to turn.

The protest is very well prepared: the farmers in Delhi say they can sustain the action for months. The protest was answered with tear gas and water cannons, but that did not stop the farmers. Camps have been set up on access roads to Delhi with their own supply chains. In addition, there are local actions by farmers in various cities, with a willingness to move to Delhi as well. The Hindu newspaper reportedon such an action in Badbad (Punjab). Local farmer leader Parvinder Singh Makkan pointed out the importance of the women’s committees providing food every day for hundreds of activists: “On a daily basis, we make announcements from a loudspeaker in the village about the requirement of food, based on the people present at the protest site. Never had there been a day when there was any shortage of food or other essential items. The involvement of women has been a key factor in strengthening this agitation.”

One of the women in Badbar expresses the general feeling: “I have lost trust in the government, they [the Centre] have backstabbed us by bringing the new laws, which are not in our interest. I’ll keep fighting even if it costs me my life. Delhi will have to listen to us, we will make them listen.”

The actions have been prepared for weeks right down to the smallest villages and are organised in such a way that they can be sustained for a long time. The labour movement can learn from this, both in terms of preparation and methods of action that are not limited to a single day. In order to encourage the farmers to take action and move to Delhi, they had to be convinced that it was serious. The importance of a battle plan is essential there.

Furthermore, there is the question of how Indian farmers can be saved. Stopping the liberalisation of agriculture is, of course, the first demand. But what happens after that? Even before these new laws, farmers were in over-indebtedness and increased dependence on large companies with an economic development that largely bypassed the countryside. Moreover, the fragile position of agriculture is further threatened by the effects of climate change.

Cancelling the debt would be a useful step, but under capitalism it only means restarting debt accumulation. To stop the stranglehold of the banks, they must be expropriated and placed in the hands of the community, not simply to follow neoliberal logic as public banks, but in order to start functioning for the needs of the majority of the population, under the control of the workers and farmers. In this way, farmers will be able to control agricultural credit banks.

In addition, large companies in the sector must be nationalised so that the entire food production process serves the interests of farmers and consumers. Throughout the farmers’ protest, the possibility of cooperation is demonstrated, and this can provide an impetus for farmers’ committees and even voluntary cooperatives that make life and work easier for farmers’ families. All these measures demand system change.

As Trotsky said in ‘Whither France?’: “None of these measures is realizable under the rule of the bourgeoisie. Meagre charity will not save the peasant, he has no use for palliatives. He needs bold revolutionary measures. The peasant will understand them, approve them and support them, if the worker makes him a serious proposal to struggle jointly for power.”

For the second time this year there was a strong general strike in India. In January, 250 million workers took part in the first strike. Despite Covid-19 and despite repression, that number was again reached on 26 November. The trade unions explicitly linked their strike to the farmers’ protest, just as in January it was linked to the mass protest against the citizenship laws of the BJP government that sought to institutionalise discrimination against Muslims in particular. It is clear that other protest movements are strengthening the dynamics of trade union action and at the same time giving it a more pronounced political character. It is not enough to negotiate the softening of neoliberal reforms of the labour market; what is needed is a fight against the entire system, and that also requires a political programme.

The immediate cause of the strike is the planned changes in the organisation of the labour market, with the dismantling of protection for workers and the planning of new privatisations. Against the background of economic uncertainty, the type of threat these ‘reforms’ represent is all the more concrete. Covid-19 and the economic contraction are causing a humanitarian disaster with an explosion of unemployment, poverty and hunger. The migrant workers who moved to their home states in hunger caravans during the lockdown earlier this year were a visible expression of that rising misery.

The laws to liberalise agriculture and the labour market are, of course, interlinked. It is part of the BJP policy in the interest of the super-rich. This neoliberal policy is implemented peppered with Hindu nationalism in order to divide and divert attention. Unified protest is essential to answer the nationalist campaign.

The general strike of 26 November was supported by the trade unions associated with the Communist Parties and those associated with Congress. The strike confirmed the growing strength of the workers’ protest: there were 180 million strikers in January 2019, 250 million in January this year and now, despite Covid-19, once again 250 million.

At the same time, the BJP is under political pressure. In recent elections in Bihar, the BJP lost in percentage terms and the NDA alliance around the BJP was barely able to retain control of the state. Also noteworthy in these elections was the progress made by the Communist parties from 3 to 16 seats.

The question remains, however, as to which programme the left is putting forward in response to the widespread concern about unemployment and economic development. Will the Communist parties continue to count on alliance partners such as Congress, the party that launched the neoliberal ‘reform process’ in the early 1990s? Or will they go for an offensive approach with mobilisation in all areas: political, trade union, farmers in order to popularise system change and build a movement to make that change reality?

The fact that it is possible to push Modi into a more defensive position is made clear with the mass protest of recent weeks. The extreme right-wing Hindu nationalists, however, will do everything in their power to get back on track. This includes a risk of further tensions and divisions based on religion, caste or around the national issue. The workers’ movement, the farmers’ movement and the left must prepare for this.

Socialists are defending the need for a battle plan so that protests are not limited to one-off events. The farmers’ movement shows the strength of a well-prepared protest wave over the longer term. What are the trade union leaders waiting for in order to draw up an equally ambitious and audacious action plan to join the farmers’ struggle? A plan that makes it clear that the fight will be stepped up to the point in which the demands of the workers are heard.To begin with, all unions should join the call by the farmers for a ‘bharat bandh’ (general strike) on December 8 — not only in words but also in deeds, as a first step towards further joint action practically mobilising workers alongside the farmers.

There is great dissatisfaction among broad sections of the population, but long-term mobilisation will require an alternative to the present policies. Rejecting neoliberal reforms is a good and necessary starting point. In a period of global economic decline and increasing tensions in the context of the new cold war, it is becoming increasingly clear that capitalism means misery and hunger for the Indian masses. There is a need for a complete overhaul of the system. Revolutionary activists must organise themselves in order to lay the foundations for the socialist change that is so badly needed on the Indian subcontinent!