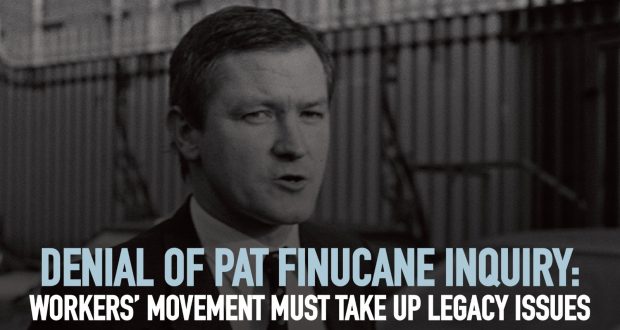 The denial of an inquiry into the infamous murder of Pat Finucane has once again shone a light on the lengths the British establishment are prepared to go to hide their real role in the Troubles. Pat Finucane was a lawyer who had represented republican prisoners and was killed by the UDA in front of his wife and children in 1989. A mountain of evidence clearly illustrates that there was serious collusion between loyalist paramilitaries and the British state in his killing.

This decision comes despite David Cameron in 2012 admitting in parliament that there were “shocking levels of collusion”, something the Northern Ireland Secretary Brandon Lewis again admitted as they denied an inquiry. A previous inquiry found that much of the loyalist paramilitaries’ intelligence originated from the British security forces, with significant ‘leaks’ of police information to loyalist paramilitary organisations. The UDA’s intelligence officer, Brian Nelson worked closely with the British Army’s notorious Force Research Unit. That inquiry also exposed that MI5 knew of the threats against Finucane’s life but failed to protect him.

The denial of a new inquiry in the face of this evidence reflects the real attitude of the British government, which seeks to cover up countless acts of collusion, including by refusing to release documents. While they have been forced to admit to this or that act of collusion, their general approach has been to minimise its scale and scope, and dismiss claims of collusion as largely a “pernicious counter-narrative”. This is about protecting those high up in the British state apparatus who are clearly responsible. For example, at the time of the killing, Special Branch officers briefed former Tory Home Office Minister Douglas Hogg that “some solicitors were unduly sympathetic to the cause of the IRA.” Hogg repeated this in a parliamentary debate after Pat Finucane’s shooting.

Many right-wing commentators have come to the defence of the British government, including Ruth Dudley Edwards, who argued that spending “millions” on such an inquiry would be an insult to other victims. This is clearly an attempt to pit victims of the Troubles against each other. All victims of the trouble be they the victims of massacres at Kingsmill, Ballymurphy or Louginisland have the right to the truth and to pursue justice.  Socialists take the view that the British state, alongside both the loyalist and republicain paramilitaries, cannot be trusted to expose the atrocities which they themselves are responsible for.

No trust in the state or sectarian parties

The attempts by the establishment to find mechanisms to deal with ‘legacy’ issues from the Troubles have been based on bringing together these actors, most recently with the secretive Lambeth Palace talks, convened by the Archbishop of Canterbury. These involved leading republican Sean Murray, leading loyalist Winston Irvine and prominent police officers, including former Chief Constable Jon Boutcher, who is now responsible for Operation Kenova – the inquiry into the actions of the British agent in the IRA known as Stakeknife.

We doubt that these figures are rendered any more willing to subject their respective organisations to scrutiny due to discussions over tea with an Archbishop. Socialists have no confidence in the capacity of the sectarian forces and the state to expose their own role during the Troubles for examination. Nor should we have faith in establishment figures in the ‘international community’ such as Joe Biden, when over years they have been responsible for similar atrocities across the world.

Workers’ movement can expose the truth

We do, however, have a confidence in working-class people to expose the truth. The trade union movement played an important role throughout the Troubles in organising against sectarian violence. At times, often at the initiative of members of the Socialist Party and its forerunners, the movement also took up contentious issues such as state repression, and challenged paramilitarism. Today, it remains the force best place to organise a real process that can look at the ‘legacy’ issues which remain as open wounds in our society.

This could take the form of a wide-ranging inquiry into the Troubles, which would not be in the hands of the state or establishment parties, but made up of respected trade unionists and those with a record of campaigning on these issues from the standpoint of ordinary people, including human rights groups. Such a process should not be conducted in secret, behind closed doors, but before the public and in a manner which actually shines a light on the role of the various forces involved.