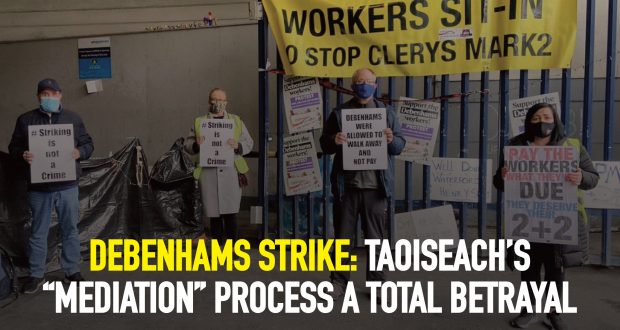 Over the course of the last decade the Taoiseach Micheál Martin in the Dáil chamber referred to the €64 billion bank bailout of 2008 precisely as a “bailout” no less than 57 times according to the Dáil record.

However, yesterday when the contrast was made between that largesse to the banks and the manner in which the state has refused to facilitate, by prioritising the workers ahead of themselves, a comparably modest amount of money from the Debenhams liquidation to settle the dispute, the Taoiseach, clearly flustered, turned reality on its head. Rather than dealing with the betrayal of the Debenhams workers through the process that he initiated he instead sought to rewrite history and declare that no bank bailout ever took place!

Accompanying this outburst he, for the second time this week, attacked the left who stood by these workers and encouraged their instinct to fight from the outset. In addition, earlier in the week he accused us of undermining the union in the process! Varadkar today in the Dáil echoed these attacks on the left in response to questioning from opposition TDs.

When the Taoiseach appointed Kevin Foley from the Labour Court to mediate a settlement to the Debenhams dispute, which has now passed 250 days, the workers reasonably hoped that as a minimum the process would yield a recommendation that would exceed the derisory €1 million offer (in two parts) from the liquidator KPMG back in September — an offer that didn’t even warrant a ballot it was so bad.

In the course of the Foley process, a big demand of confidentiality was placed upon the union and the shop steward team who were engaged in the negotiations, which ran over the seven to ten day schedule originally estimated.

The shock of the shop stewards at the outcome is entirely warranted. The shop stewards were given a real sense in the course of the process that a settlement could have been reached.

Instead the report produced by Kevin Foley bears little resemblance to the negotiations that happened and instead provides no cash settlement for the workers. There is the promise of a €3 million training fund to which no reference was ever made in the course of the negotiations.

This €3 million is less than the combined €4.6 million KPMG took in fees and spent on security and other overheads arising from the protracted nature of the struggle. The workers would have had an entitlement to assistance in further education and training in any event. Many of the workers have already begun courses. Many others have taken up new jobs. Others are close to retirement age and see no practical benefit in taking up courses at this stage of their lives.

The report published by Foley reveals where the blocage to a decent settlement lay. The Department of Social Protection insisted on retrieving the €13 million it shelled out from the insolvency fund to pay for the statutory minimum entitlements to the workers (two weeks redundancy, pay in lieu of notice and for untaken annual leave). Likewise the Revenue Commissioners insisted it get some €5 million due in VAT.

The fact that Kevin Foley, appointed by the Taoiseach don’t forget, had asked these two Departments to forgo some of this €18 million suggests that a different answer was possible.

“Deal” should be rejected

We have been clear from the outset that the law as it stood, which prioritises the state and businesses creditors ahead of workers in liquidation situations, did not provide for the settling of this dispute. That in no way took away from the correctness of the struggle the workers have waged over eight months. The government is politically and financially liable here by not having acted after the Clerys’ debacle. Debenhams UK took full advantage of the state’s negligence to the detriment of the Debenhams workers.

This government is effectively hiding behind senior civil servants. If, as they might insist, some law change or new statutory instrument was required to allow for a settlement to be achieved it is entirely possible to deliver this. As has been pointed out on social media, the government is content to rush through an almost two thousand page EU / Canadian trade deal (CETA) through the Dáil this week.

Their concern about precedents is bogus. The programme for the government has promised, albeit vaguely, to deal with how workers are treated in liquidation situations so why worry about precedents if you intend to legislate to cover all workers in any event?

MANDATE officials agreed to ballot whatever proposal emanated from this process which was a wrong gamble. The union has indicated it will issue ballots but not immediately because of the Christmas period and that they will not make a recommendation. The shop stewards as a body have a right to make their own recommendation to the workers. It is an open question as to what the result will be as the section of the workforce that have actively engaged in picketing and protests, while sizable, are not a majority of the MANDATE membership in Debenhams.

The widespread support in Irish society and in the ranks of the trade union movement for the Debenhams workers remains. Clearly eight months picketing in the depths of winter takes a toll on people. Whatever the outcome of a ballot the moratorium on KPMG disposing of the stock will be lifted in the new year. If a No vote to this sham offer is delivered a fresh form of escalation is required to force a decent settlement.

Trade union movement must be mobilised

As far back as last August, at the end of the national protest march in support of the Debenhams workers, Socialist Party member and former Solidarity TD Ruth Coppinger made the call for MANDATE to ballot its wider membership even for a half day of action as a demonstration of seriousness to the government and employers as a class. In light of developments at Arcadia and other likely threats to jobs in retail, such a call retains its validity — despite the ridicule it invited from a senior Mandate official.

Like the ICTU organised protests marches that turned into a spontaneous and effectively unofficial widespread strike movement across Irish society during the 2005 Irish Ferries dispute, it is entirely justified and required for the trade union movement to attempt to make a similar cause celebre for the Debenhams workers. The workers have more than earned such an initiative from the trade union movement.

Whatever the outcome of the Debenham’s struggle, the fight for lasting changes to how workers are treated in liquidation situations will go on and there will be no let up on that front in 2021.