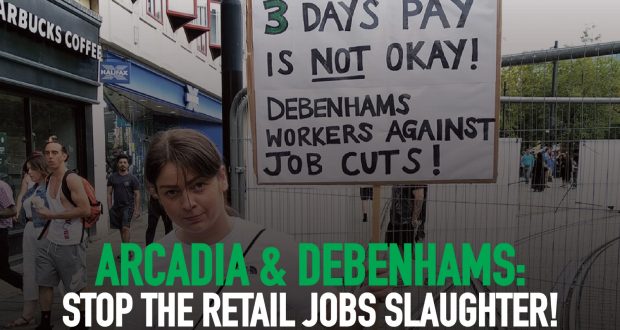 Article by members of the Socialist Party in the North about a new jobs massacre that’s taking place in the retail sector in the UK. Trade unions need to take a firm stance in defence of these jobs and to demand state intervention, including democratic public ownership, to ensure they are maintained.

This week, high street giant Arcadia – owner of clothing shops such as Burton, Topshop, Dorothy Perkins and Miss Selfridge – went into administration. With 13,000 jobs in the balance across the UK, retail workers in these stores will be rightly concerned about what this will mean for them, only a few weeks before Christmas.

Arcadia workers will also rightly be concerned about what this means for their pension scheme, which already faced a £350 million deficit. For workers below the retirement age, this could mean at least a 10% cut to their pensions, even after being placed in the Pension Protection Fund.

At the same time, the threat of job losses at Debenhams has re-emerged, with JD Sports pulling out of a potential takeover, issuing a brief statement saying “discussions with the administrators of Debenhams regarding a potential acquisition of the UK business have now been terminated”. This is, in part, a knock-on effect of the crisis in Arcadia, which was an important concession-holder for Debenhams.

Already this year, Debenhams announced it was going into liquidation, without any concern for its workers – announcing over 6,000 job cuts in the UK in the first half of 2020. At the same time, the company closed all its stores in the Republic of Ireland, sacking 1,000 workers in the process. The latest announcement now puts a further 12,000 jobs at risk, including at five stores in Northern Ireland. In total, over 25,000 high street jobs are on the line.

2020 has seen a rapid acceleration of the high street collapse, initially started by the rise of online retail giants such as Amazon. What was once a slow move online has been transformed into a brutal slashing of jobs in the retail sector. The furlough scheme has proven that it is unfit for purpose, and has failed to protect tens of thousands of workers.

The Socialist Party has been directly involved in the heroic, ongoing struggle of Debenhams workers in the South for a decent settlement. The example of this struggle should be built upon, with protests and, where necessary, strike action and workplace occupations to defend jobs and fight callous layoffs.

Debenhams and Arcadia must open their books to the workers to show where the money has gone. In 2015, the Arcadia Group – owned by multi-millionaire retail tycoon Sir Philip Green – famously sold off the failing BHS department store for £1, but not before Green took £400 million out of the company for himself! In addition, Green himself should be forced to plug the gap in the pensions deficit to ensure full pay to the workers, many of whom have worked for Arcadia for decades.

If the company’s accounts are opened to scrutiny, it will be abundantly clear that, even after government bailouts during the pandemic, this money has been squandered. Instead of parasites such as Green, it should be the workers who own and who make the decisions about how the company is run. The big companies threatening job losses during this crisis must be taken into democratic public ownership, under workers’ control and management. Likewise, furlough payments should be paid directly to the workers, rather than to keep the bosses afloat, and should be topped up to cover full wages.

This is just the latest development in an ongoing wave of redundancies of which low-paid retail and hospitality workers have found themselves on the sharp end, and which is predicted to leave 2.6 million workers in the UK unemployed over the next 6 months. It is abundantly clear that the market is incapable of protecting the jobs of ordinary people. Now more than ever, it is crucial that we get organised to defend jobs and fight the jobs massacre that is taking place.