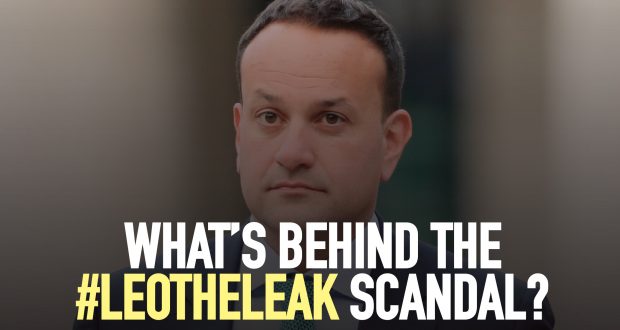 What’s behind the #LeoTheLeak scandal?

In the last number of days the government has been hit by another scandal, this time relating to the actions of Tánaiste Leo Varadkar.

Last Saturday an article in The Village magazine exposed how in April 2019, then serving as Taoiseach, Varadkar leaked a confidential government document to his friend Maitiú Ó Tuathail, president of the now defunct National Association of General Practitioners (NAGP) – a fake rival “union” to the Irish Medical Organisation (IMO).

This is potentially a criminal offence that carries a 10-year prison sentence. It is clear that no such criminal charges will be pressed, however, and Varadkar’s position in government is secured by the backing he’s received from Fianna Fáil and the Green Party. They, alongside the majority of the media, have simply given him a mild rebuke, and circled the wagons in his defence.

The leaked document in question was a contract between GPs and the government, and represented a partial reversal of cuts to primary care that took place in the period following the 2008-2009 economic crisis. The NAGP was opposed to proposals contained in the contract, including free GP care for children under the age of six – a policy welcomed by most people, although far short of what’s actually needed, which is free and universal primary and general healthcare.

Varadkar’s double standards in leaking, via courier, this document to the NAGP, and demonstrating favourability towards this organisation, will not be lost on the paramedics who are members of the union NASRA. Despite this being the union to which the majority of paramedics are members, this group of health workers were forced to take numerous days of strike action to demand union recognition and oppose union busting by the HSE and the (Varadkar) government.

An insight into our rulers

Like #Golfgate in August, the saga surrounding this scandal speaks to the insidious connections that tie the ruling class in this country together. This time we see it in the connection between a key representative of the political establishment, Leo Varadkar, and the movers and shakers in the medical establishment. The former chairman of the NAGP is Andrew Johnson, the state’s top-earning family doctor, who receives €1.1 million a year in fees from medical cards.

Connections such as these ensure that this wealthy medical elite, and the private healthcare companies with whom they are associated, can profit handsomely from the privatisation of our health service via state contracts.

Chay Bowes, the whistleblower who revealed the information to The Village, through access he had to an NAGP WhatsApp group (pretentiously named the NAGP inner sanctum), illustrated this close connection. His company, Tara Healthcare, received an annual budget €6.4 million for a programme to provide patient care in homes that had previously been provided in hospitals.

This profiteering, which stems from the privatisation of our health service, must be opposed. We need all private healthcare companies brought into public ownership and integrated into a one-tier national public health service that is free at the point of use.

In a private message, O’Tuathail asked Bowes if Vanguard, the private medical company Bowes is now involved with, would consider investing in setting up a Direct Provision Centre – emphasising the profits that were to be made by putting a money bag emoji in a message to highlight this.

Tellingly, he assured Bowes that Varadkar would not countenance any reform (let alone abolition) of this system, saying that:

“LEO literally couldn’t give a fuck about the refugees. Its (Justice Minister Charlie) flanagans baby. There would be a HUGE amount of work required to get it over the line.”

Behind its facade, the above statement exposes the racist contempt held by the powers-that-be in this country for those suffering in this inhumane system – a suffering that has been heightened by the pandemic. Not only are they unwilling to end such suffering, they are eager to profit from it.

Socialists demand that Direct Provision and the grotesque profiteering that goes with it is abolished, with asylum granted to refugees and the implementation of a programme of public works to build the hundreds of thousands of homes we need for all.

Build a movement for socialist change

The Covid-19 crisis, Golfgate and the events surrounding Varadkar’s actions graphically highlight the rigged nature of the capitalist system we live under, and the manner in which rich and powerful exert their influence on society. The reality is that their benefits all come at our expense, and so it’s high time working-class and young people took control of the political and economic levers of power, with a mass movement for socialist change.