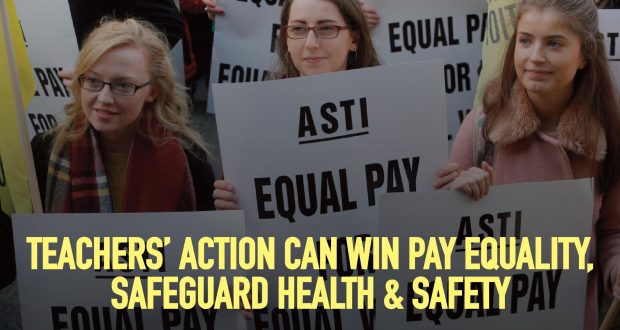 At the end of October, members of the Association of Secondary Teachers in Ireland (ASTI) voted to take industrial action up to and including strike action on several key issues. The long-standing equal pay for equal work ballot was passed to act with one or both other teachers’ unions. In more recent times health and safety issues have come to the fore arising from the Covid-19 pandemic and the reckless unwillingness of the government to provide the necessary safeguards in schools.

The Teachers Union of Ireland (TUI) recently held a virtual Special Congress due to the pandemic restrictions. Last February, the union held a one-day strike to end pay discrimination – so already have an industrial mandate in place on delivering equal pay. Under the New Entrants / Pay Equity section, a motion submitted by the Executive Committee stated that achieving “pay parity is a key priority of the TUI”. The motion was accepted by delegates with the inclusion of the amendment from the Dublin City and College branches, which called for, “further strike action, if possible in conjunction with ASTI and INTO, until pay parity is achieved”.

After almost ten years of pay discrimination in education, two of the unions can and should now come together to discuss taking joint strike action on this issue. The supply and retention of teachers crisis in schools has sparked a response from within the teachers’ unions to act on two-tier pay. In urban areas in particular, the cost of living around housing, rent and childcare, for example, have exacerbated the supply and retention crisis in education. A pattern is well established where teachers have surrendered contracts of employment in cities and relocated elsewhere. The union leaders must demand of government an end of pay discrimination now and real investment in education or face industrial unrest.

The pandemic has revealed who the essential and front line workers are within society. It is outrageous that teachers, who are amongst this group of workers, continue to face pay discrimination – a by-product of the 2008-2009 bank bailout. This is while the richest 300 in Irish society can amass record wealth of €93 billion. It is indicative of where the priorities of the current government lie that they have allowed this inequality to continue.

Health and safety at risk

Teachers, since their return to the classroom this autumn, have been compelled to look at student and teacher wellbeing and health and safety. This is going to be a long winter in the absence of a vaccine. In the US and Britain, Covid cases are reaching record levels. We need major increase in funding to education to provide laptops to facilitate distant learning where classes and schools will have to temporarily close due to Covid.

We need significant reduction in class sizes and free PPE. The University of Edinburgh researched that the R rate increased by 24% when schools re-opened in Scotland. Once the R rate goes above 1 an outbreak grows exponentially. While the Taoiseach’s raison d’etre is to keep schools open, it cannot be at the political expediency of student and teachers’ health and safety and wider society.

On the Covid measures, ASTI voted for local consensus to any change to work practice provided that it is time neutral. The union requires that a close contact is redefined as any person who has spent more than 15 minutes in a classroom with a positive Covid case. A serial testing programme for schools needs to be established with a guaranteed test turnaround time of 24 hours to ensure that students and teachers are safe.

Teachers in the high-risk category will have to either work from home or be provided with safe accommodation within the school environs. Teachers, SNAs and students have a right to work and study in a safe environment and must have democratic control over health and safety, we cannot rely on this government to ensure this happens. They have a right to take the necessary strike action to safeguard their wellbeing.

The TUI at Congress voted for referral of an emergency motion that included the demands mentioned above which the ASTI had accepted through ballot. The TUI Executive Committee, having argued for referral, will be held to account by the ranks of the TUI if members are unnecessarily placed at risk during this pandemic. Teacher’s unity can develop through the current crisis. The task facing members is to make sure we act in unison to end pay discrimination and maintain health and safety standards appropriate to a pandemic.