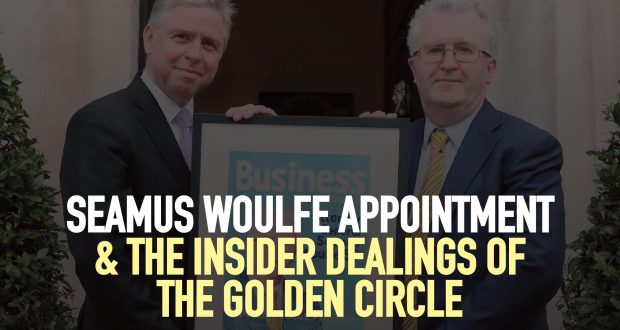 Seamus Woulfe appointment & the insider dealings of the Golden Circle

When “Golfgate” broke it rightly angered working-class people across the country.

Here we had an example of a breach of Covid-19 regulations by an elite group from Ireland’s capitalist establishment. It consisted of serving politicians, retired politicians, bankers, an ambassador, an EU Commissioner, a Supreme Court Judge and many of their unnamed guests.

This was when the livelihoods and lives of large portions of the population were thrown into chaos due to those very same restrictions which saw unemployment soar, people miss family events, and go through increased stress and anxiety.

The message was clear, it was one rule for the golden circle, another for everyone else.

Amongst those at the Oireachtas Golf society dinner was the newly appointed Supreme Court Judge, Seamus Woulfe.

Woulfe had just been appointed as a judge to the highest court in the state the month previously by new Minister for Justice, Helen McEntee, in the newly formed Fine Gael / Fianna Fáil / Green Party coalition.

Woulfe was the Attorney General in the outgoing government – essentially the government’s legal advisor with a seat at the cabinet table.

This position saw him play a key role in many issues that arose in the time of the last government. Most controversially, he gave the legal opinion that the government should block the Occupied Territories Bill – a modest proposal to block imports from Israel’s colonial settlements in the West Bank – despite the Bill being approved by the Dáil and Seanad, on grounds of it being ‘unconstitutional’. This is despite scores of legal opinions contradicting this advice.

As well as being the Attorney General in the last government, Woulfe was also a long-standing active member of Fine Gael. He was the Branch Secretary of the Dublin Bay North branch and well known and connected in the party. He is reported to have been very close to Varadkar.

When Fianna Fáil, Fine Gael and the Greens formed a government, they agreed that the Attorney General position would go to a Fianna Fáil appointee. This saw Woulfe out of a job.

Just weeks later he was then appointed to the Supreme Court despite never having been a judge in a lower court at any point in his career.

Minister McEntee claims that this was her decision and hers alone and that it was not part of the coalition talks. However, it has been established that Varadkar knew of Woulfe’s desire to be appointed to the Court since February and made this opinion clear to McEntee herself.

It would appear that this appointment put the noses of other judges out of joint. Three others had applied to fill the vacancy in the Supreme Court but were passed over.

Following ‘Goflgate’ tensions within the Supreme court came to a head and into the open. This included an inquiry followed by a series of cancelled meetings. One of the most notable clashes was between Woulfe and the Chief Justice, Frank Clark, who has called for Woulfe’s resignation. He did so citing the reputational damage to the Court, however many believe the opposition to Woulfe is in support of colleagues who missed out on the position. Clarke and Woulfe have reportedly exchanged explosive letters with each other containing allegations and counter allegations, many of which are currently unpublished.

This scandal has shone a light on the nature of the judiciary and how the government appoints judges.

The government has been quick to shout about the ‘separation of powers’ and how the Dáil is unable to look into the records of the judiciary. The Minister for Justice had refused for weeks to even take questions in the Dáil on the matter citing this. They claim that this ‘separation’ is essential that the courts are independent of the parliament and the government.

This co-called separation of powers is a sham. The reality is that the judiciary is hand-picked from an elite few. The vast majority of judges are appointed from among the ranks of barristers, and senior ones at that! To become a barrister there are several hoops a person must get through, all made easier with connections and money.

There is only one college in the state that trains barristers – the ‘honourable society’ of King’s Inns – an institution established in 1541 by Henry VIII with the express motive of excluding Catholics from key positions in the legal system. We are now no longer in the throes of his brutal regal rule; however, the exclusionary and elitist ethos remains. The college has many arcane and exclusionary practices, such as secret dinners and inner clubs.

It is also a myth that somehow judges are separated from the political establishment. Woulfe’s political connections have been well documented. However, one-third of judges have political backgrounds themselves directly or are connected to political figures. Frank Clarke, the judge, who called on Woulfe to resign, was himself a member of Fine Gael and even ran for the Seanad for the party. Another Supreme Court judge with heavy connections to Fine Gael is the President of the Appeals Court, George Birmingham. Birmingham was a former Minister for Fine Gael and someone who campaigned alongside Frank Clarke in the 80s in election campaigns.

The government has spoken about how they will look at reforming judicial appointments in the future. However, even if there is a system put in place that eliminates the most obvious examples of cronyism, ‘old boys club-ism’ and appointment of political allies, the judiciary will not be transformed into a bastion of defenders of democratic rights for working class people and the oppressed.

The political connections through political parties are just one of the thousands of ties that link the legal establishment to the interests of the capitalist class. They are removed from the vast majority with inflated salaries, they socialise with the elites, have family ties with them, go to the same schools, colleges and clubs.

Crucially they oversee a capitalist legal system and state that has as its cornerstone the defence of the wealth, private property, and profits of the super-rich and big business. The events surrounding ‘Golfgate’ and the appointment of Seamus Woulfe, along with the pandemic we have endured since March, have graphically exposed whose interests society is organised for.

Capitalism is a system rigged in the interests of its ruling class. This system must go. Working class and young people must organise around a socialist movement to ensure that this happens. If you agree, then join us today.