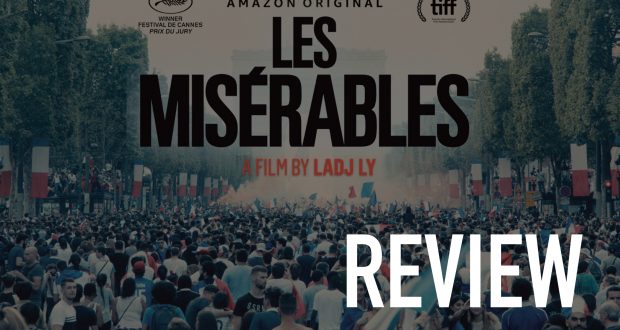 Ladj Ly’s Les Misérables (2019) borrows its name from Victor Hugo’s historic novel written in 1862 but is most relevant in 2020. The film is set in the district of Montfermeil, where Ly grew up and where the events of Hugo’s original were written to have taken place. “It hasn’t changed much” characters remark when speaking about the social deprivation which is rife in the area. Ly commented that this is the first element of the film, the second being a depiction of the conditions of communities in banlieues, in particular the prevalence of police violence.

This year there have been eruptions of protest all over the world following a video showing the police killing of George Floyd, an unarmed black man in Minneapolis, USA. The Black Lives Matter movement is one against racism and police brutality, and Ly’s work as a videographer offers crucial insight into these issues in France. Ly gained prominence in 2008 when he shot and released footage of riot police attacking a handcuffed man, leading to the suspension of the officer involved. The incident would inspire the creation of the 2019 film.

The film begins with the aftermath of France’s victory at the 2018 FIFA World Cup. Crowds fill the Avenue des Champs-Élysées, adorned with tricolour flags waving and cheering in exultant celebration. Imagery employed during this opening sequence is reminiscent of that of musical adaptations of Hugo’s Les Misérables, where masses of people line the streets during the June rebellion of 1832. Both instances parallel each other as they represent unity, French people joined together regardless of class or creed in rebellion and antithetical celebration. They also both come to a crashing end, with the novel revealing the brutal state repression which quashed the uprising in 1832, and the characters of Les Misérables (2019) returning to the realities of the banlieue (suburb).

Conflict of power is central to the plot of the film, which follows two police officers who oversee a newly transferred rookie from Cherbourg, and it is from his perspective of shock that we view the breaches of conduct which occur on the streets of Montfermeil every day. Chris, the more heavy-handed of the resident officers, casually harasses and brutalises young men and women. When met with resistance, he asserts “I am the law”. The Mayor, their “very own Obama” clashes with police, his own monetary interests always at heart. In response to the precarious existence of young people that leads many to commit crimes, and the ambivalence of community actors like the Mayor, the Muslim Brotherhood religious group focuses on intervening on the cycle of violence. All forces become embroiled when a travelling circus conductor accuses a young man of stealing a lion cub. The police, in the pursuit of maintaining ‘law and order’, heighten the use of repressive force, searching for the perpetrator. In doing this, they start a skirmish between themselves and young men playing football, which ends in a shocking act of violence captured on a drone camera by a teenager nearby. Much like the real events that inspired the film, the footage itself holds great power, as if released it would reveal the corruption and brutality of the police. Fearing repercussions Chris goes to extreme lengths to obtain and destroy the video, including collaborating with organised crime groups to which the police turn a blind eye in their daily duties, focusing their efforts on harassing local young people of colour.

The police receive a warning from Salah, the leader of the Muslim Brotherhood who was previously involved in juvenile crime, incarcerated and attempting to raise himself and others like him above the cycle of crime and punishment that seems inescapable. In reaction to young men on the streets attacking the officers in guerrilla-style protests against their increased brutality, he tells police “you won’t avoid their rage”. Just as the dire conditions of poverty leading to young people’s involvement in petty crime, and the police violence to which they are subjected, is seen as inevitable, their revolt is also inevitable. The film concludes with a crescendo of violence, with teenagers of Montfermeil trapping police in hallways of the apartments where they live and unleashing a lifetime of police repression and violence back upon them. The conflict of power at that moment has been won and is firmly clasped in the hands of a brutalised child.

Ladj Ly said that his Les Misérables was an expressly political film, “I wanted to make the point that a century later the same social misery still exists”. The film portrays how violent police intervention does not protect working-class people, but heightens the precariousness of their conditions. Beyond this, it shows the failure of the capitalist system to support working-class people, who are failed on every level from healthcare to acceptable housing and secure jobs. Instead, when petty crimes are committed as a result of these conditions, the system offers harsh punitive action. Ly invokes Victor Hugo’s maxim; “there are no bad plants or bad men. There are only bad cultivators.”

Today in the era of the Black Lives Matter movement, with extreme and seemingly ever-increasing instances of police brutality and absence of justice, Les Misérables is essential viewing.n

Unprecedented floods in Europe: Solidarity as the last line of defence