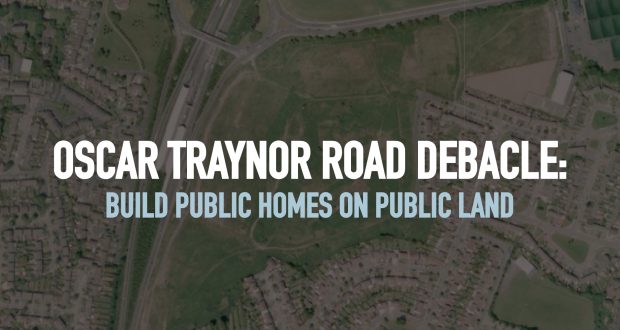 The news that the proposed Public Private Partnership (PPP) development of the council owned Oscar Traynor Road site, known locally as the Lawrence Lands, was voted down by Dublin City Councillors was a very welcome turnaround. This was shaping up to be a criminal giveaway to private developers.

The proposal involved inviting a private developer, Glenveigh, to build 853 units on a council owned site and to keep 50% of those homes for themselves to sell at full market rates, provide 30% to the council for social and senior citizens accommodation and sell the remaining 20% ‘at cost’ to the council, for the council to then sell on at an ‘affordable rate’. This rate would be somewhere in the region of €250,000-€310,000 i.e. it would be beyond the range of most, low and middle income workers, as similar arrangements such as that in St.Michael’s, Inchicore would testify to.

The seeds for this terrible proposal go back to 2015 when under the ‘Land Initiative’ encouraged by the then Fine Gael/Labour government the Council were directed to identify sites it owned for housing development on a PPP basis. Of course, they refrained from using the term PPP as it was already a tarnished concept from the previous collapse of similar projects a decade earlier. The rationale for this funding model was that because of the EU’s fiscal rules the council could not themselves raise the finance for building homes directly on the land as it would add to the state’s deficit figures.

So instead it was proposed that indications of interest would be sought from private developers to go and raise the finance themselves to build the units and take a majority cut of those units for themselves in payment. The original breakdown proposed by the council was for an 85%/15% split in favour of the private developer! Myself and other councillors on the radical left counterposed from the outset that the whole site should be developed by the council for public housing, both social and affordable.

In the end Fine Gael, Fianna Fáil, Labour and Sinn Féin, who at that point were the largest party in the council chamber, agreed with council officials to the 70%/30% split in favour of the developer with the 70% being made up of 50% full market rate and 20% affordable rental i.e. a broadly similar proposal to was recently voted down five years later.

Back in 2015 only eight councillors, including myself opposed this giveaway. One local Sinn Féin councillor rationalised this compromise on numerous occasions by painting the likes of myself as lacking in “pragmatism” with the refrain of, ‘if you take the all or nothing approach you run the danger of ending up with nothing’! Our response was that it was not a simple question of ‘all or nothing’. The outcome of a strike, struggle or campaign may not be 100% victory, but that can be permissible if you can be satisfied that at least a proper fight was waged and you got the most out of a situation. However, Sinn Féin declined to join forces with those of us who precisely argued at that point that a campaign needed to be fought to knock down this bad proposal and put in its place a 100% public housing proposal.

Instead, we have had five lost years involving a protracted tendering process where developers directly engaged with Council Officials about their interest in the PPP. Throughout this stage of the process councillors were refused permission to see the details of these tenders so that some of us could pick them apart and make direct comparisons with a public home building model because of ‘commercial sensitivity’!

A combination of public pressure and changed arithmetic in the council chamber has led to the welcome voting down of this proposal at the final hurdle. Sinn Féin, who lost half their seats in last year’s council elections in Dublin City Council and nationally subsequently expressed a muted regret over their backing for these types of PPP proposals. They, and Labour (who had a Minister in charge of housing when the proposal was first made) became latter day converts in opposition to this proposal.

The waste of profiteering

In the short aftermath of this proposal being voted down the recent up to date figures provided by the Department of Housing and the Society of Chartered Surveyors in Ireland confirm again what the Socialist Party, Solidarity and others on the left have been arguing throughout the housing crisis. The Department of Housing collated figures from all the local authorities which show that on average it costs them €380,000 to €400,000 to acquire a home from a private developer that they are obliged to sell them under Part V of the Planning Act. This mandates that 10% of units in private developments be set aside for social housing.

This compares to an average cost of €210,000 to €230,000 if the council builds directly on the land it owns or is owned by some other state body. The SCSI has backed up these figures. Furthermore by directly building you eliminate the time consuming private tendering process which stretches the process out by years.

The lessons of this saga

The lessons of the saga of Oscar Traynor Road need to be generalised. Public Private Partnerships have no place in public housing provision nor in the delivery of any public infrastructure or services. Instead we need a programme of emergency public house building, social and affordable, on publicly owned land.

Furthermore, we need to take the major construction companies into democratic public ownership and establish a publicly-owned construction company. On this basis we can build homes, hospitals and schools at cost price and eliminate the wasteful and parasitic profiteering of privately owned companies such as BAM, the company responsible for the building of the National Children’s Hospital.

The housing crisis is going from bad to worse in the context of an economic crisis. The necessity to break with the failed capitalist market in this context has therefore an added urgency.