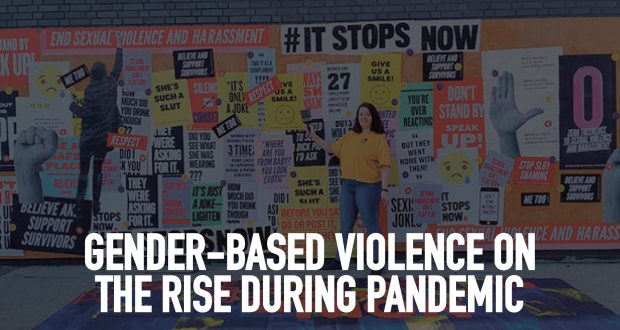 Gender-based violence on the rise during pandemic

On 25 November, the International Day for the Elimination of Violence Against Women was marked by feminists all around the world.  This year is one of the most important years to organise and challenge the system that perpetrates violence and sexual abuse against women and girls.

Gender-based violence has been an increasing issue in society, but has been further exacerbated by Covid-19 and the increased isolation necessitated by public health restrictions. Domestic abuse services are unable to meet the needs of those seeking to flee abusive relationships. In the first six months of the pandemic, countries all around the world witnessed a significant increase in domestic violence. This increase highlights the fact that this is a deep-rooted issue across the world.

The extent of gender-based violence

The Programme for Government noted that violence against women in Ireland was an ‘epidemic’. If the government understands the scale of the crisis, why have they not treated it with anything like the urgency that it requires?  According to the world health organisation, one in every three women worldwide have experienced either physical and / or sexual intimate partner violence or non-partner sexual violence in their lifetime.

Why are governments around the world ignoring women and children who need urgent assistance? Budget 2020 allocated €20 million in funding for domestic abuse services and a measly €5 million to sexual violence services. By comparison, the cruel Greyhound racing industry received €17 million. This has been replicated in Budget 2021. The increase in funding is welcomed, although it is not nearly sufficient in terms of what is needed. Campaigners and experts who work in this field, have advocated for an additional €7.5 million to be allocated to services in this year’s budget. However, there has been no clarity on the amount of funding these vital services will receive.

Locked down and locked out

A report conducted by Safe Ireland called Tracking the Shadow Pandemic, showed that nearly 3,500 women and 589 children, who never contacted a domestic violence support service before, looked to these services for the first time during the initial six months of lockdown. This equated to 19 women and three children every day. The report also highlights that there were 33,941 helpline calls answered, meaning there were on average 184 calls per day.

The pandemic bore witness to a global increase in domestic violence. In the first six months, Irish services saw a 25% increase, while China reported that domestic violence tripled up from the previous year. France reported a 30% increase, while domestic murders doubled in the UK. The lack of funding for these services has locked women and children out of receiving the necessary support and accessing safe spaces. Decades of neo-liberal and capitalist policies has resulted in the decimation of vital services.

The Tracking the Shadow Pandemic report tells us 1,351 or 7 requests for support per day from women and children across the state could not be provided for. The reality is that services and refuges have had to turn away requests for shelter as they are too under-resourced to operate at the level needed.

For example, in Cork, there is one refuge for families who are victims of gender-based violence, with a total space for six families – which was limited to two during the height of Covid-19. This shows the scale of the government’s failures. The CEO of Safe Ireland, Mary McDermott, noted that the government has verbally prioritised domestic violence and she welcomes the step, however “calling something a priority means that it also has to be name-checked in the national budget, and funded and resourced as a priority”. McDermott regarded the influx of women and children to services as an eye-opening indicator of the depth of hidden abuse and trauma in Ireland.

Movements against violence and misogyny

What is necessary to combat these issues is to allocate the necessary and appropriate funding to domestic and sexual abuse services. A huge social initiative is needed to combat this societal problem, including a comprehensive sex education programme in schools with a clear emphasis on consent. Aside from this, a mass movement from below of women, young people, non-binary and all sections of the working class, is necessary to combat sexism, misogyny and gender based violence.

Around the world, a new mass global women’s movement has continued to mobilise and demand their rights in the course of this pandemic. In Poland, mass protests took place against attacks on abortion rights. Chile’s movement against femicide produced the “A Rapist in your Path” song which highlighted the systemic and institutional ways in which women’s oppression is perpetrated and has been taken up globally. In Ireland young women are organising in opposition to image-based sexual abuse and are putting pressure on the government act on this vital issue.

Working-class women experience the harshest facets of capitalism, this makes them some of the most dedicated, radical and determined opponents of a system that needs sexism, racism and other forms of division to continue its exploitation for profit. An international, feminist socialist movement that challenges and eliminates patriarchal and capitalist standards, linked to a united struggle of working class and young people against the whole system of capitalist inequality, could positively transform the lives of women, men, children and the LGBTQ+ community.