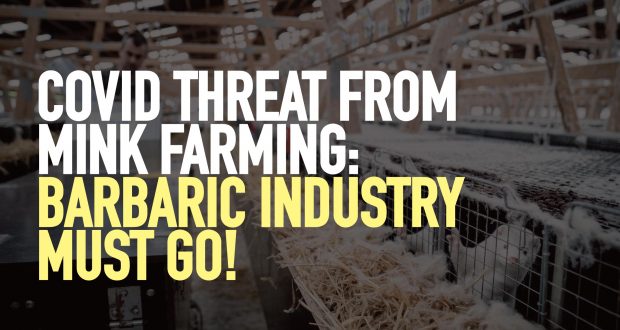 Denmark has the largest number of mink farms in Europe, with 1,080 farms. The new strain of coronavirus has been detected at 207 of the farms. Irish authorities have implemented a programme of testing at the three Irish mink farms and restated the requirement of people to isolate if coming into the country from Denmark. Denmark has implemented a cull of all mink.

In addition to Denmark the coronavirus has now been detected on mink farms in the Spanish State, the Netherlands, Italy, Sweden, and the United States. The cramped caged conditions on mink farms lend themselves to rapid spread of viruses between mink themselves.

This is a very serious situation with a ‘mutant’ form of the virus posing the danger of a renewal of the pandemic and possibly putting into jeopardy the effectiveness of the vaccines that are based on an earlier form of the virus.

Mink are semi-aquatic animals native to Canada and Russia. They are not herd animals and are naturally solo-hunters, which makes the farming of them for their fur particularly cruel. Mink forced to live in close proximity to one another in cages has a devastating impact on their quality of life and makes them more susceptible to behavioural problems and disease. Mink fear human interaction making taking care of their health next to impossible; the only human interaction is feeding and when they are killed. The manner in which killing takes place has raised serious concerns. Given that they are semi-aquatic animals, killing them by gassing takes longer for them to die.

Mink are farmed for their furs – which is still seen as a luxury good by some. The fact that fur is no longer fashionable in Europe is putting the mink farming industry into decline but strong markets outside of Europe still exist and the fur industry continually tries to re-invent itself. Ireland now has just three mink farms and largely due to widespread awareness of the nature of fur farming fur is not sold in retail in Ireland.

The need to ban fur farming in Ireland has been raised by campaigners such as the National Animal Rights Association (NARA), Respect for Animals and the international Fur Free Alliance. The Irish Society for Prevention of Cruelty to Animals and Veterinary Ireland have also effectively outlined the barbaric nature of fur farming and called for a ban.

In the last Dáil Socialist Party TDs Mick Barry and Ruth Coppinger published the Prohibition of Fur Farming Bill. This Bill got international attention and support from animal rights campaigners as it would mean Ireland would be a further European country banning fur farming.

With the coronavirus threat, many countries are now accelerating plans to ban fur farms. Prior to our Bill being debated the Minister at the time, Michael Creed, made a commitment to implement a ban and set about drafting a government Bill to ban fur farming. The new government has continued this commitment, but there has not been movement on the publishing of their Bill or time set aside to have it passed in the Dáil and Seanad. With mink farming coming under further scrutiny now is the time for the government to stop delays and ban fur farming. The Minister doesn’t even have to wait for getting a Bill passed, he could do it tomorrow by ministerial order under existing legislation.

While fur farms are not a major employer in Ireland, a programme of retraining and alternative employment for those working in the industry is required when a ban is implemented. In other countries there have been successes in moving farms to fruit and vegetable production. Workers, including the largely seasonal workers, should not be out of pocket because of an end to this particularly barbaric farming practice. A just transition is required.

Nature of farming under capitalism

Capitalism is about the production of goods and services for profit with workers, our planet and farm animals coming a distant second priority. Ultimately, capitalism sees farm animals as commodities and their welfare is not the prime concern. Farmers are under severe pressure to make a living from farming with capitalism pushing smaller farmers out of business with a global move to large-scale farming and intensification with a devastating impact on animal welfare and our climate. As seen in the spread of the coronavirus in mink farms, the spreading of viruses between animals and from animals to humans is made easier with intensive farming practices.

Socialists stand for the end of the rule of profit and for the production of necessities in the interests of human need in line with what is needed to sustain our planet and biodiversity. We need a move to sustainable farming methods and an increase in tillage farming. This means taking major agribusinesses into democratic public ownership and organising food production – locally, regionally and internationally – on the basis of a plan to meet people’s needs, while protecting the environment, and ensuring an end to the cruel treatment of animals